Call me famished. Whenever I find myself growing grim about the mouth, whenever it is a damp, drizzly February in my soul, whenever I find myself involuntarily pausing before Red Lobster, and especially whenever my craving for hush puppies gets such an upper hand of me that it requires a strong moral principle to prevent me from driving through Captain D's, then I account it's time to try a new seafood restaurant.

I was not alone in my quest for fruits de mer; it seemed that half of the city had the idea to try the first St. Louis location of the Tampa, Florida-based seafood chain Bonefish Grill. Rising out of the Drury Inn parking lot like a Floridian manse, I could tell that the place was a hit. Cars packed the expansive lot, and eager patrons waiting for a table spilled out of the lobby and into the cold (weekday) night air. All signs pointed to smooth sailing.

Inside the restaurant's swanky lounge, well-heeled professionals jockeyed for a spot at the bar, anxious to blow off some steam from the day's work over raspberry martinis and calamari. The large bar, backlit with dim amber lights, cast a warm glow throughout the space. Long granite-topped communal tables and large semicircular banquettes provided a place to rest one's weary sea legs.

The warm feel carried forward to the dining room -- Bonefish Grill had taken pains to create an inviting atmosphere. Alas, this did not translate into the meal. I began with an appetizer of butterflied shrimp, stuffed with lobster and shrimp Imperial (a mayonnaise-based seafood stuffing). The medium-size shrimp were overwhelmed by the bland, gooey topping that was desperately in need of citrus or wine. The "Singapore Calamari" looked and tasted exactly like extra-crispy fried chicken -- the peppery batter was far too heavy for the squid.

Bonefish Grill's Maryland crab cakes were one of its better appetizers. Large hunks of jumbo lump crab were mixed with minimal breading and served with spiced red-pepper remoulade. My one complaint is that the cake was mixed with so much mayo and mustard that it completely broke apart with only the slightest prodding. The restaurant's signature appetizer, "Bang Bang Shrimp," comes breaded and heavily coated in a rich, sriracha aioli. It's a tasty snack -- like an Asian-style Buffalo shrimp.

The entrées at Bonefish Grill were also troubled, but before launching into those, I must give credit where it is due. I was thrilled when I saw that Bonefish offered a whole branzino, and even more pleased with the succulent meat (though the almond grains and green salad side dish was overdressed to the point of soupiness). The wood-grilled Chilean sea bass, brushed with a simple lemon butter, was one of the best pieces of fish I have had in recent memory. Earthy char from a well-seasoned grill flavored the pearlescent filet; its buttery flesh was cooked impeccably.

On to stormier skies. Our server did not ask for a temperature on the salmon. It arrived so well-done that even the generous drizzle of lemon-butter sauce could not reconstitute the dried-out fish. I was similarly underwhelmed by the "Lobster Thermidor Mahi Mahi." The fish was well-cooked and moist, but it arrived drowning in the thick "Thermidor" sauce (which I'm convinced is nothing more than the restaurant's lobster bisque). Its advertised lobster and crab topping was so minuscule it barely registered.

The twin lobster tails tasted off, had a tough texture and were served without the promised drawn butter. A sirloin ordered rare arrived medium-well. Its Oscar topping consisted of microscopic bits of crab and a bland sauce unlike any béarnaise I've ever tasted -- it had a melted-butter consistency rather than the luscious, egg-based texture.

I had high hopes for what turned out to be a lackluster lobster grilled cheese. Though the sandwich boasted a healthy portion of lobster, there was barely enough cheddar and mozzarella. The accompanying lobster bisque was one-dimensional. A healthy dose of something like brandy or sherry would have brightened it up. 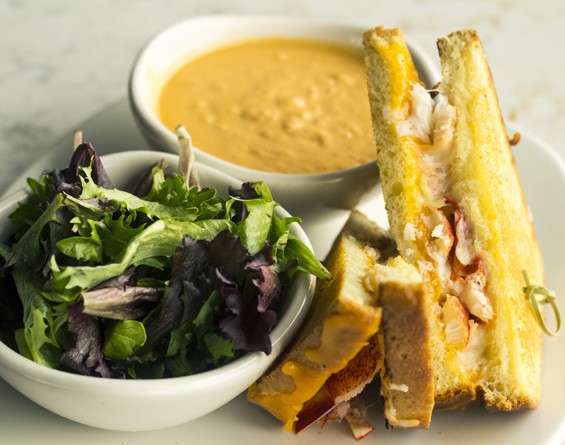 My biggest bone to pick with Bonefish was delivered courtesy of the "white truffle" mac & cheese. Nothing tasted remotely of truffle in this dish. There were slices of mushroom in the pasta that the restaurant insists are truffles mixed in the noodles, but perhaps it meant the completely un-aromatic domestic variety. If this is what Bonefish is trying to pass off as a "truffled" pasta, it's an egregious bait and switch.

To complete my tale, I must mention the service. Bonefish Grill's website says, "We take fine dining and remove all of the stuffiness that gets in the way." I have to wonder if by "stuffiness" the restaurant means basic table maintenance and steps of service. On both visits, my table remained cluttered with dirty dishes throughout every course, to the point that I was stacking my new plates on top of dirty ones to make room.

On my final visit, I elbowed my way out of the crowded restaurant, high and dry in my quest for great seafood. Aye, the search goes on.