Review: Bowood by Niche Is a Magical Culinary Oasis 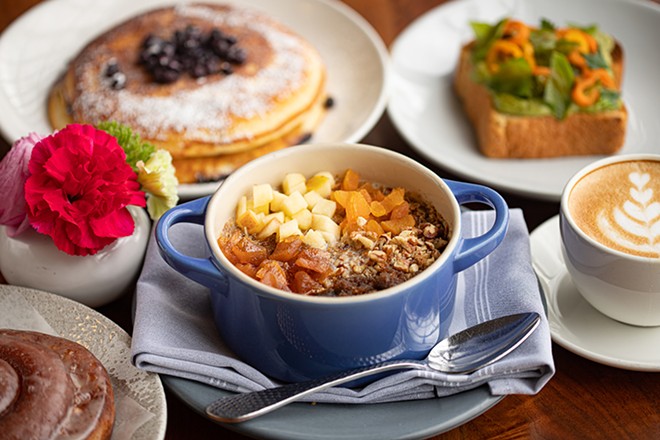 Every morning, chef Koda Williams begins his day at Bowood by Niche (4605 Olive Street, 314-454-6868) with the following ritual: He arrives in the kitchen about an hour before anyone else, turns on the equipment, then makes himself an Americano and heads up to the rooftop garden. Nominally, he's there to collect fresh herbs for the day's service, but in reality, he sees his time up there as a way to center himself and take in the oasis-like beauty of his Central West End urban-farm environs. Embracing the stillness before the day starts, he is there before dawn, so he can watch the sun rise over the city, bathing the greenery that surrounds him in a gentle light that is positively ethereal.

Williams' feelings every time he sits in that early morning sunlight must be similar to what comes over you while dining at Bowood by Niche. It is less a place to go for a bite to eat and more an opportunity to bask in the splendor of nature's bounty. Much of this has to do with its setting; located inside the gorgeous, glass-enclosed Bowood Farms garden center where greenery and flowers abound, the restaurant feels as if it is the culinary gem of the Garden of Eden.

However, Bowood by Niche does not simply take advantage of this atmosphere: It translates its splendor to the plate. That is exactly what Williams' boss, chef and restaurateur Gerard Craft, had in mind when he took over the space last autumn. When he first announced the concept, Craft described his desire to fill diners with comfort following the horrors of the past two years and said he wanted the place to feel like a warm hug. Williams ran with that idea, creating a menu of approachable breakfast and lunch fare that may look simple but is filled with so much love it transcends the usual daytime playbook. 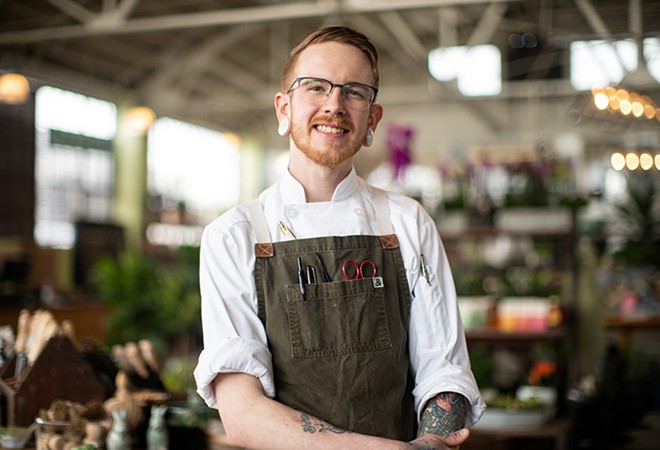 Williams and Craft had big shoes to fill. For over a decade, Bowood Farms' gorgeous restaurant space had been occupied by Cafe Osage, a beloved Central West End gathering spot whose kitchen was helmed at different points by the culinary talents of David Kirkland and Scott Davis. When Bowood announced that Cafe Osage would be closing in late 2020, it deeply saddened the surrounding community who had relied on it as their special spot.

Craft understood what the place meant to people, so when he decided to take over the restaurant space, he knew he needed to be respectful of its legacy while putting his own stamp on it. Williams was the perfect person for that task. Having worked with Craft for roughly seven years, he excelled at the now-shuttered Sardella (R.I.P.), especially its brunch service, and saw Bowood by Niche as an opportunity to build upon his success at the former Clayton eatery while forging a new path.

That path is a stunning one. Unequivocally, Bowood by Niche is one of the metro area's most soulful, flawlessly executed daytime spots, a designation earned by masterful interpretations of classic daytime fare. What's so special is how Williams and his team are able to do this without being needlessly showy or veering too far from beloved favorites. The eggs in the eggs Benedict, for instance, are in their quintessential form: poached, hollandaise-covered and set atop ham. However, Williams makes the dish transcendent by replacing standard ham with delicate prosciutto, which is placed atop golden-griddled semolina bread. Brown-butter hollandaise — one of the best condiments you'll find in the bi-state area — gilds two perfectly poached eggs, and a side of lemon-dressed arugula cuts through the richness. It's familiar, but extraordinary.

Mabel Suen
The light-filled space is a tranquil oasis in the middle of the city.

Oatmeal, too, is revelatory thanks to Williams' deft touch. The dish arrives positively ceremonially: A deep-blue, individual-sized Le Creuset Dutch oven is placed on the table with the lid on. When lifted, it reveals a crock of multigrain oats, topped with brown sugar, apples, dried and jammed fruit, almonds, almond milk and housemade cultured butter that you are instructed to mix together. The richness of the butter and milk, sweetness of the fruit and rustic feel of the hearty grains and nuts conspire to create the culinary warm hug Craft mentioned when he first envisioned the space.

Williams' buttermilk pancakes evoke the feeling of cast-iron-cooked hotcakes made in a rustic cabin. The flapjacks are thick and have a slightly rustic texture. The outer edges are a gorgeous toasted brown color and crisp, while the inside remains fluffy and cake-like. Fresh blueberries, folded into the batter, sweeten the pancake from within, and a dollop of cultured butter adds richness as it melts over the top. 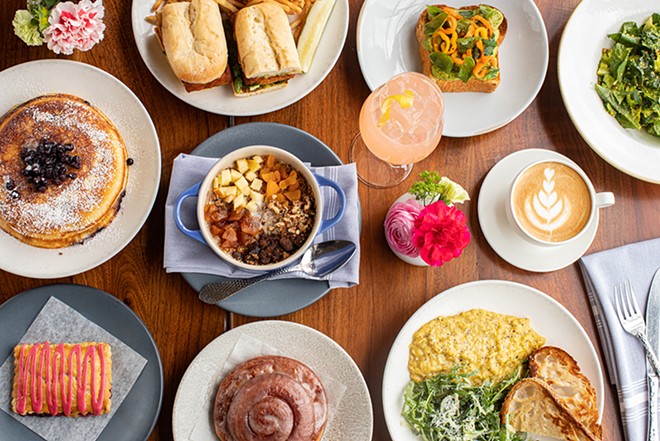 Though Bowood's breakfast menu is filled with one delight after another, the sleeper surprise favorite might be the egg toast. Here, two slices of thick-sliced griddled brioche are crowned with soft-scrambled eggs that are so silken, you'll ask yourself why eggs are ever cooked any other way. Hunks of crispy prosciutto — think prosciutto bacon bits — are folded into the eggs, seasoning them with the flavor of sweet and salty pork. Chive oil and crème fraiche are drizzled atop the eggs. As the fresh crème melts over the top, it mingles with the chive oil and gently trickles down the bread like a miniature waterfall. I would have sat mesmerized by the sight were I not so eager to dig into this breakfast masterpiece.

Bowood's lunchtime offerings are equally stunning. A butter-lettuce salad shines in its simplicity; the silken leaves are kissed with just a whisper of lemon vinaigrette, a stunning canvas for hunks of smoked trout, chili-toasted almonds and freshly grated pecorino and Parmesan cheeses. Sandwiches, too, are delightful. A fritter of crispy fried tofu has an exterior as crunchy as a piece of fried cod, but the interior is so decadent you wonder if it's actually made from fresh cream rather than bean curd. Even a simple burger, made from deeply umami dry-aged beef, feels special thanks to its garnishes of pickled shallots and caramelized-onion aioli.

Recently, Bowood began dipping its toe into dinner with a prix fixe menu that Williams says is a precursor to a full-service evening dining experience. He notes that there is an outdoor kitchen in the works that will feature a wood-fired oven and grill. That, together with all of the bounty in store from the farm's upcoming season, should make the restaurant complete. Welcome additions, sure, but Bowood has already proven that it is a worthy addition to the city's dining scene.