Review: Cantina Laredo Shows the Sleeker Side of Tex-Mex 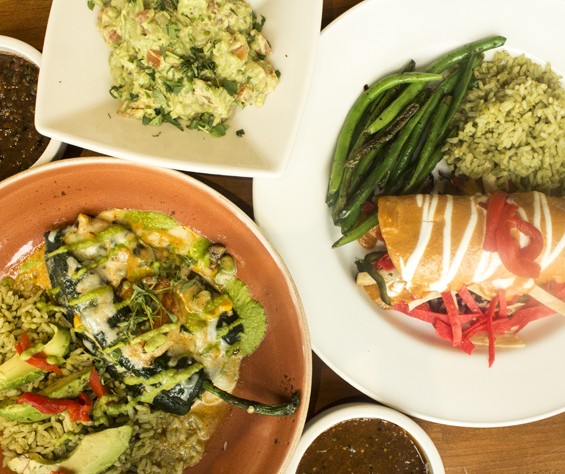 Forget, for a moment, that Cantina Laredo looks less like a cantina in Laredo and more like a posh restaurant on a golf resort in Scottsdale, Arizona. Never mind that serving fajitas with copious amounts of sour cream is as authentically Mexican as Taco Bell, or that the restaurant is named for a pair of border towns but inspired by a city 700 miles to their south. If you can suspend your disbelief, you'll have a pretty good time at Cantina Laredo. 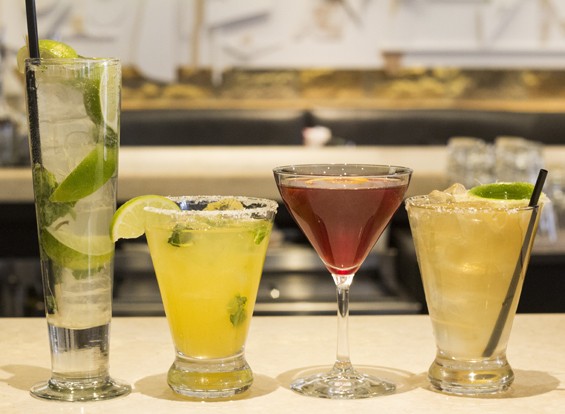 The newest occupant of Clayton's Centene Plaza is the first St. Louis location of the Dallas-based modern Tex-Mex chain that has locations everywhere from Branson to Abu Dhabi. Cantina Laredo describes itself as upscale-casual, drawing inspiration from the flavors of Mexico City. In the sense that the massive Mexican capital is a vibrant, modern economic powerhouse filled with entrepreneurial types, Cantina Laredo captures that scene. The polished restaurant -- outfitted in warm-colored contemporary stone, blond wood and curved floor-to-ceiling windows -- the place has a trendy, cosmopolitan vibe that caters to the area's business set. Especially at happy hour, the large, open bar is packed with well-heeled professionals sipping on fruit-infused drinks -- stiff ones -- or the "3 Amigos," a lime-and-Cointreau cocktail served with a shot of tequila and a Corona.

Those who go to Cantina Laredo expecting a Cherokee Street taqueria will be disappointed; the restaurant hits a sweet spot between the greasy, cheese-drenched Americanized joints and authentic Latin American cuisine. The restaurant's signature appetizer, the "Top Shelf Guacamole," could not get any fresher if it were enjoyed at a café on the Pacific coast. An employee whose sole job is to prepare the guacamole arrived at our table with a cart of ripe avocados and assorted traditional accoutrements so we could doctor the dish ourselves. She prepared a creamy dip full of garlic, tomatoes, onions, cilantro, a touch of jalapeño and a generous squeeze of lime juice. 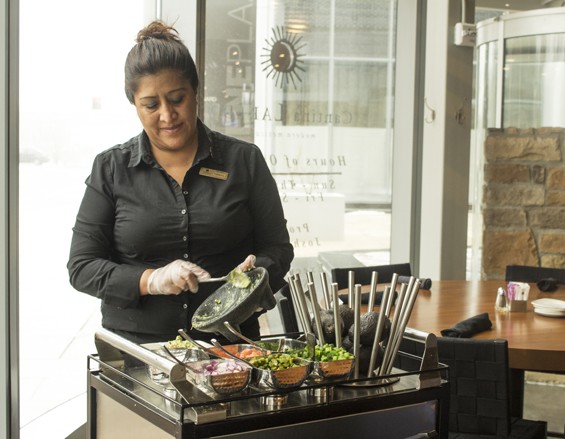 Guacamole made table side. | Mabel Suen

I was less impressed with the ahi tuna tacos. The raw fish that stuffed the crispy taco shells tasted slightly off. The chipotle aioli mitigated this, but there wasn't enough. The crispy tacos were served with a side of unremarkable jicama slaw and -- the highlight -- three large dollops of guacamole. The ceviche performed better, but it wasn't perfect. Shrimp, scallops and mahi mahi were marinated in lime juice and tossed with capers, peppers and olives. The flavor was fresh and bright, though the seafood's texture was slightly tough.

Cantina Laredo serves six different versions of enchiladas. The "Enchiladas de Cangrejo" consisted of lump crabmeat rolled into a corn tortilla and smothered in chile de árbol cream sauce. The dish was rich without being overwhelming, though I wished for more crab and spice from the chile sauce. The "Enchiladas Veracruz" hit their mark: The tortillas were filled with a Mexican version of chicken-filled spinach dip and topped with a piquant tomatillo sauce. Again, the dish was pleasantly decadent when it could have veered toward the overly indulgent. 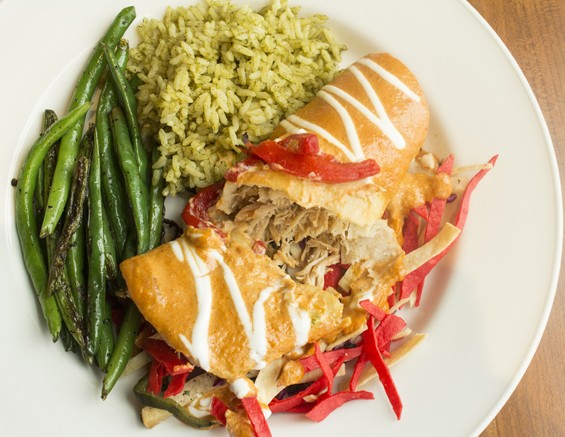 The "Costillas Con Fajita" arrived as a heaping skillet of ribs, steak and chicken. The size was impressive, but the taste was mediocre. The pork ribs were dry and slightly gamey without any trace of the advertised tequila barbecue sauce; the steak was well-seasoned but overdone. The chicken was the highlight of the dish, remaining juicy even as it cooked on the hot cast-iron platter. Some simple warm flour tortillas, sour cream, pico de gallo and Mexican rice served as adequate trimmings. My favorite part of the dish was the side of tender, savory pinto beans steeped in flavorful jus. I ended up filling my tortillas with them for a delicious vegetarian treat.

Cantina Laredo's fish of the day was a simple, seasoned sea bass, kissed with just a hint of grill char (but slightly overdone). "Relleno de Camarones" was a more impressive seafood selection. Grilled shrimp, Monterey jack cheese, and a creamy corn, mushroom and zucchini sauce were stuffed into a mild roasted green pepper. It was a luxurious cornucopia of flavors. 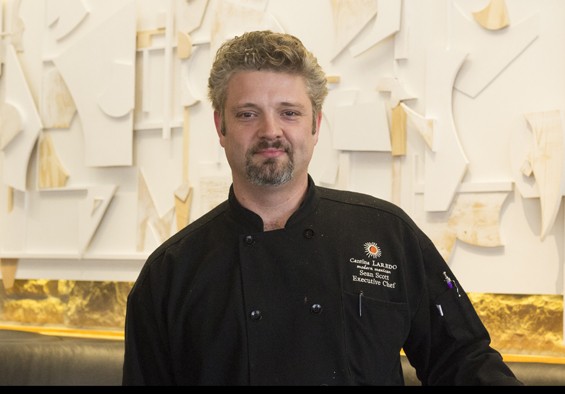 My favorite dish was the "Torta de Carnitas" -- tender roast pork stuffed topped with an over-easy egg and stuffed between griddled ciabatta. The yolk oozed over the pork, mingling with a tangy-sweet combination of goat cheese and apricot spread.

The Mexican apple pie is a flaky, oozing dessert served on a searing-hot skillet. When drizzled with brandy butter tableside, the sweet aroma perfumes the dining room. It's imperative to finish one's meal with this showstopper.

There wasn't a moment during my visits to Cantina Laredo that I forgot I was in downtown Clayton -- but that's fine. It may not be the town's most authentic Mexican restaurant, but it's a genuinely enjoyable experience. 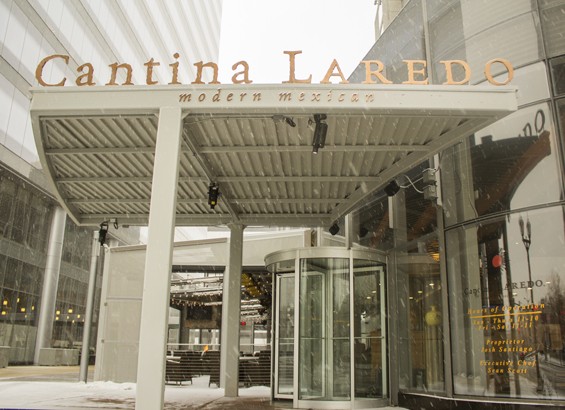 Outside Cantina Laredo at Centene Plaza on a snowy day. | Mabel Suen