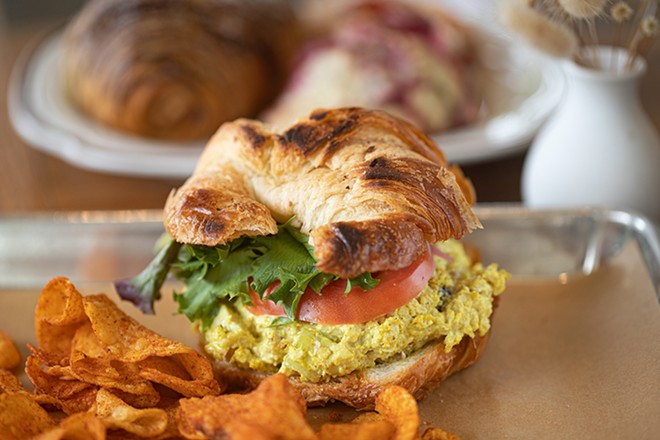 Megan King-Popp and Monica Croke had been serving coffee and cafe fare to their McKinley Heights neighbors for roughly three years before the pandemic forced them to temporarily transition to a takeout- and outdoor-dining-only spot in the summer of 2020. Every morning, they'd head outside, prop open their takeout window and unfurl their patio umbrellas.

Every morning, locals would stroll by and ask if they were new.

King-Popp admits the scene was frustrating, but she understood. When she and Croke opened their play cafe, Urban Fort, in 2017, they'd envisioned it as a community gathering place that happened to be family friendly. The thought was that guests could come in for a bite to eat or a cup of good coffee; if they had kids with them, the littles would not only be welcomed but also accommodated with a play area, toys and child-approved snacks that would give them something to do and give their caregivers a moment of respite. 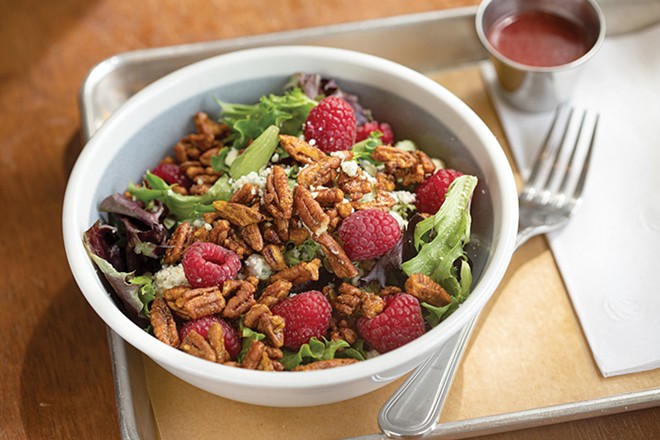 On day one, King-Popp and Croke realized this was not going to work out the way they'd planned. Caregivers flocked to Urban Fort with their kids, thrilled to have a place to decompress over caffeine while their little ones could run amok without the judging eyes of fellow coffeeshop guests. However, it was clear that this scene did not bode well for those without kids who were looking for a peaceful coffeehouse environment. Even without going inside, the neighborhood quickly designated Urban Fort as a kid place because of how many children went into the building. When King-Popp and Croke got to talking to their neighbors on the patio that summer of 2020, they found out that everyone assumed they were a daycare.


Though they were fine with being a kid-friendly spot, King-Popp and Croke also wanted to be a neighborhood gathering place. When the pandemic hit, this desire became even more urgent, since Urban Fort had to discontinue indoor play. Recognizing an opportunity to reconceive their space, the pair decided to split Urban Fort into two entities; on the one side, they would continue to be the family-centric play spot that their regulars had come to love, while the other side would be turned into a quintessential neighborhood cafe. They separated the area with a soundproof wall, created a divided entrance and officially launched as a rebranded food-and-drink concept, Gather (1854 Russell Boulevard, 314-376-4235, gathercafestl.com), last May.
click to enlarge 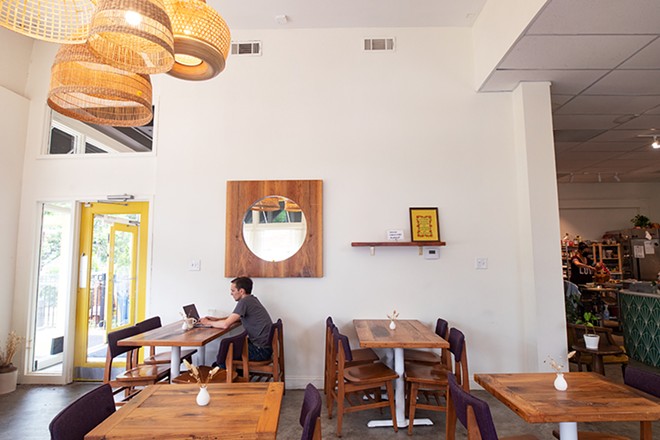 MABEL SUEN
Gather's dining room is both cozy and airy.

Dining at Gather, you understand why King-Popp and Croke were so intent on opening up to a broader audience. The embodiment of all you want in a cozy neighborhood cafe, Gather offers the sort of easy daytime fare that deserves to be recognized in its own right. The BLTE, for instance, pairs a perfectly cooked over-medium egg with thick slices of bacon and tomatoes on grilled sourdough bread from Union Loafers. Homemade tomato jam adds a bit of sweet umami flavor, and garlic aioli gives a more complex undertone than simple mayonnaise. Beautifully executed, the sandwich shows how much joy can be derived from a classic sandwich.

The OG Breakfast Sandwich, too, is a simple delight. Again, its success comes from the basics: a well-cooked egg that has just enough runny yolk to add richness, sharp white-cheddar cheese, thick bacon and chipotle aioli for a whisper of heat. The biscuit sandwich is equally enjoyable. Here, a flaky, housemade biscuit is stacked with a scrambled egg, chicken sausage, American cheese (is there a better breakfast-sandwich melter?) and mustard aioli to cut through the richness. For those not interested in sandwiches, Gather's Vegan Breakfast Bowl is a delightful treat. Mashed sweet potatoes, accented with cinnamon and maple syrup, are topped with homemade granola, blueberries and coconut yogurt that is so tasty it makes even this Greek-yogurt aficionado consider going plant based. 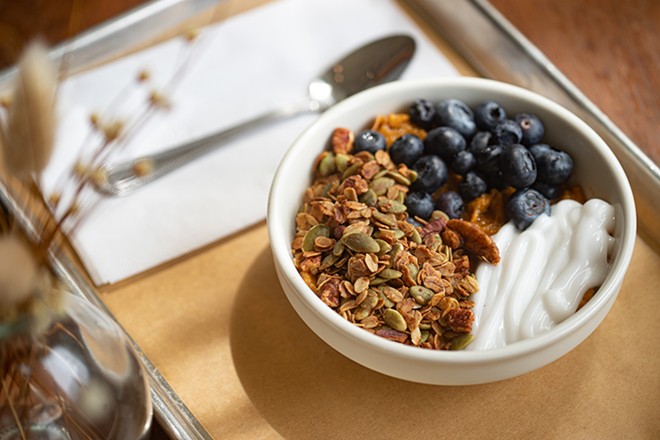 Gather's lunch offerings mirror breakfast in their thoughtful details. A standard chicken salad sandwich, served on a croissant, is made extraordinary thanks to warm yellow curry and hunks of pungent red onion, while a vegan hummus and bagel sandwich is enlivened with a tart balsamic glaze. The cafe also serves a seasonal menu (changing in about a month) that includes such hits as a delightful turkey and brie sandwich with peach habanero jam and a spring salad of mixed greens, candied pecans, raspberries and a magnificently tangy gorgonzola cheese. However, if only one special could become a permanent fixture on the menu, it should be the egg salad sandwich. From the way the tarragon and capers beautifully cut through the rich mayonnaise and egg to the chunky texture that actually looks like cut-up hardboiled eggs rather than the yellow mush so often passed off as egg salad, this is a thrilling update to an established form.

I'd have gladly tolerated the kid noise — even without my daughter in tow — to experience such a delightful sandwich. That I can now do so in peace and quiet only makes it all the more delicious.