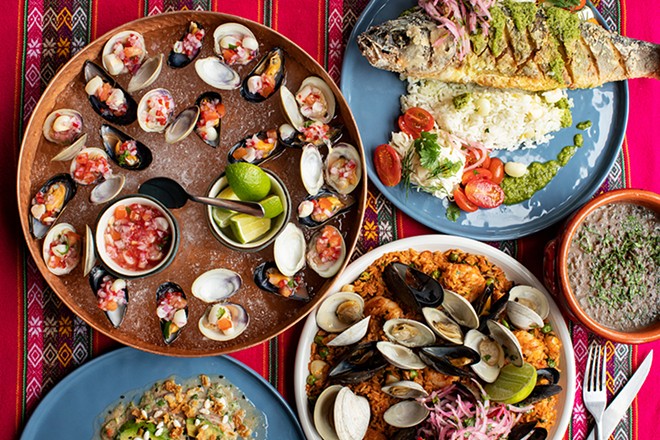 Andrew Cisneros admits he has an obsession with food. Even after a long day at work, his wife finds him in the kitchen, reading cookbooks, researching ideas or playing around with different recipes. She has no idea how he does it; Cisneros doesn’t see how he couldn’t.

When you experience Cisneros’ Classico ceviche at his five-month-old restaurant, Jalea (323 North Main Street, St. Charles; 636-493-1100), you feel this obsession. Even before you take your first bite, the painstaking effort he puts into preparing the dish reveals itself in the form of a gorgeous presentation. The entire floor of a shallow, white bowl is covered in a thin layer of orange-hued leche de tigre, a citrus marinade that is a key ingredient in classic Peruvian ceviche. Atop the vinaigrette sit small cubes of translucent corvina that are so symmetrical you wonder if Cisneros used a ruler to measure out each cut. The opalescent fish is adorned with squares of bright-orange sweet potatoes, red onion slices, paper-thin red Fresno chiles and cilantro so perfectly placed it looks as if each piece has been intentionally positioned.

Though you know the dish will be outstanding just looking at it, you’re still gobsmacked on that initial bite. The corvina is so tender, melting in your mouth and leaving behind traces of sea, citrus and herbs. The chiles gently warm the palate; the lime juice lights it up. The result is an electric experience that leaves you wondering how on earth you’ve eaten such glorious ocean bounty in the middle of St. Charles’ Main Street. 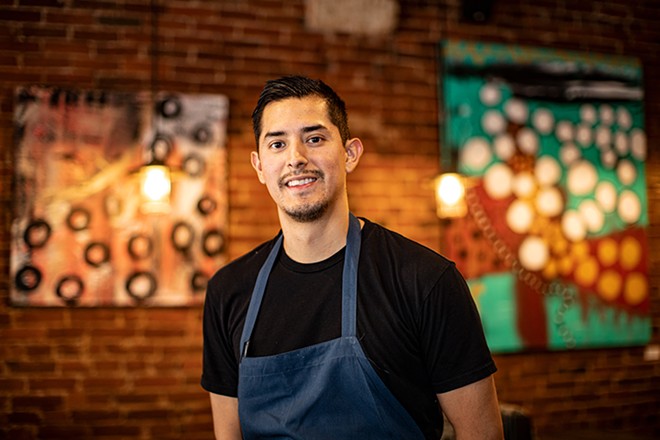 Cisneros wants his guests to ask themselves exactly that question. The whole point of opening Jalea, his debut restaurant, is to give diners in the St. Louis metro area an experience of a cevicheria as traditional as if they were in coastal Peru. It’s been a dream of his for as long as he can remember — ever since he was in high school, where he rotated his time between playing soccer and doing cooking competitions in preparation for a career as a chef. Though he knew a place of his own was his endgame, he also knew that he had to mature in his career before that was on the table. To do that, he enrolled in culinary school, apprenticed under the revered chef Pierre Chambrin at the St. Louis Club and worked for well-regarded local names such as Mike Randolph, Ben Poremba and Gerard Craft.

While working for Randolph during the pandemic at the now-shuttered Original J’s barbecue restaurant, Cisneros began playing around with ideas in preparation for opening his own place. His thoughts centered around pollo a la brasa, a traditional Peruvian rotisserie chicken cooked over charcoal. Cisneros and Randolph workshopped the dish and came up with a version so delicious they had regular guests clamoring for it. Cisneros parlayed that success into an arrangement with Poremba to partner up on a pollo a brasa concept out of Poremba’s store, AO&Co. They found a food-trailer manufacturer, plunked down money and waited. And waited.

After months of delays with no delivery date in sight, Cisneros and Poremba amicably parted ways. Unsure of his next move but ready to work for himself, Cisneros began looking for places to open a restaurant. Around that time, his brother-in-law was presented with an opportunity to take over a restaurant on Main Street in St. Charles where he’d previously worked. The spot, a former sushi bar, had no infrastructure to support a Peruvian brasas, but it was tailor-made for another concept near and dear to Cisneros’ heart: a cevicheria. With his brother-in-law and sister bought into the idea, the three opened Jalea in early January of this year. 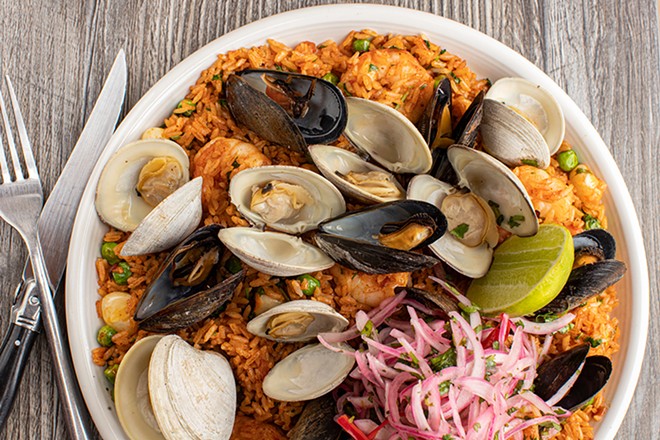 If Cisneros and his sister, Samantha, should have been worried about opening a Peruvian seafood restaurant in the middle of the stereotypically meat-and-potatoes Main Street St. Charles, they didn’t get the memo. The pair were so confident in what they were offering — his food and her drink and hospitality expertise — that they boldly opened the restaurant they wanted to open, unafraid that it might be inaccessible to prospective diners. Their approach paid off. In the five months that Jalea has been open, they have cultivated a loyal following of regulars — mostly St. Charles residents — who have warmly embraced the restaurant.

How could they not? If the ceviche is not enough evidence that Cisneros is doing something right, the sanguchitos bolster the argument. These slider-sized Peruvian sandwiches, served on brioche-like semi-sweet rolls from a St. Charles Filipino bakery, are otherworldly. Cisneros serves three varieties; the first, a blue-crab version, pairs rich, mayonnaise-based crab salad with smoked roe. The small fish-egg spheres pop when bitten, giving the sandwich a fun texture and infusing the crab salad with mild sea smoke. The walleye sanguchitos are equally stunning, consisting of lightly breaded white fish and bright aji-lime mayo that make you wonder if this is the Platonic form of the fried-fish sandwich. Jalea’s lone meat dish, tender-braised pork belly, is the star of the third sanguchito, paired with the verdant aji-lime mayonnaise that cuts through the meat’s decadence.

Jalea’s namesake dish, a Peruvian specialty of various fried seafood and yucca, is a testament to Cisnero’s talent. Though it looks simple — just breaded fish and shellfish — the execution makes it transcendent. The mixto version treats diners to an assortment of fried walleye, shrimp and calamari; the breading is substantial enough to notice but not so heavy as to take away from the seafood itself. Simply seasoned, the tender fish, shrimp and squid shine brightly, benefiting from the creamy acidity of the accompanying housemade tartar sauce. It’s an extravaganza that puts all other fried seafood platters to shame.

Mabel Suen
Jalea is one of St. Charles County's most vibrant restaurant offerings.

As wonderful as the jalea is, Cisneros’ runaway hit is the arroz con mariscos, a paella-esque seafood and rice dish with a flavor so intensely delicious it is haunting me days later. Shrimp, littleneck clams and PEI mussels — all fresh and flawlessly cooked — are placed atop garlic rice so perfect it should be the gold standard against which all other rice is judged. Cisneros gives away some of his trade secrets: He seasons the rice with the seafood’s cooking liquid to give it a subtle sea sweetness and uses a dried Peruvian red chile to add an earthy tang to the concoction. Does he also add the tears of an angel? Perhaps.

I’d drive to the ends of the earth for that arroz con mariscos. Apparently, so would many others; Cisneros sees some of his regulars from his time at Original J’s weekly. They gladly cross the Missouri River to experience his cooking. However, he now has even more loyal customers from the St. Charles area, some of whom come in two and three times a week to check out what he’s cooking. Their enthusiastic embrace proves that when you’ve created something special, everyone can tell.