The South County restaurant is a beautiful homage to the owner's late mother. 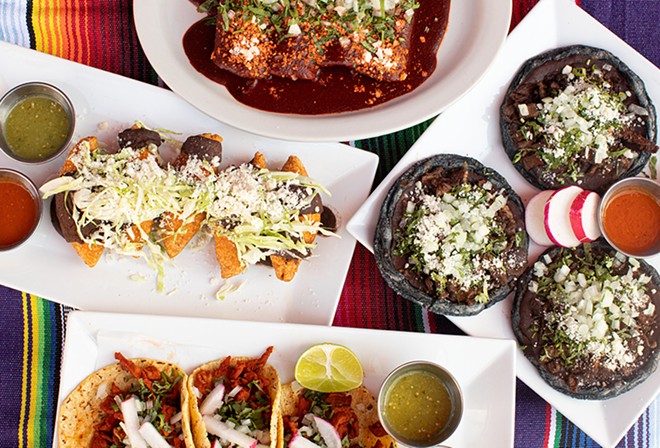 Jose Soriano is convinced he can feel his grandmother at La Oaxaqueña (2925 Lemay Ferry Road, Mehlville; 314-200-8212), the Mehlville restaurant his mom and stepdad opened this past March. He's only 10 and was not yet born when she passed away on Christmas Eve of 2005. Still, he insists he picks up on her presence when he's helping out around the restaurant, describing it as a feeling of warmth that comes over him every now and again.

When you learn the Sorianos' family story, and feast on La Oaxaqueña's traditional Oaxacan cuisine, you'll not only see why he feels this way — you'll believe him. Though the restaurant could be mistaken at first glance for a typical Tex-Mex spot, it's actually the realization of a longtime dream of Jose's mom, Yolanda Soriano, who sees it as a way to stay connected to her late mother.

Growing up in the Mexican state of Oaxaca, Soriano learned the region's traditional recipes from her mom, who she describes as an outstanding cook. Two years after her mother died, Yolanda joined her brother in St. Louis and felt the gravity of her loss, as well as homesickness, due in part to the lack of traditional Oaxacan cuisine in her new city. Though she was happy with the opportunities presented in her adopted home — including a job as a server at an area Tex-Mex restaurant — she couldn't help but long for the food her mother used to cook. 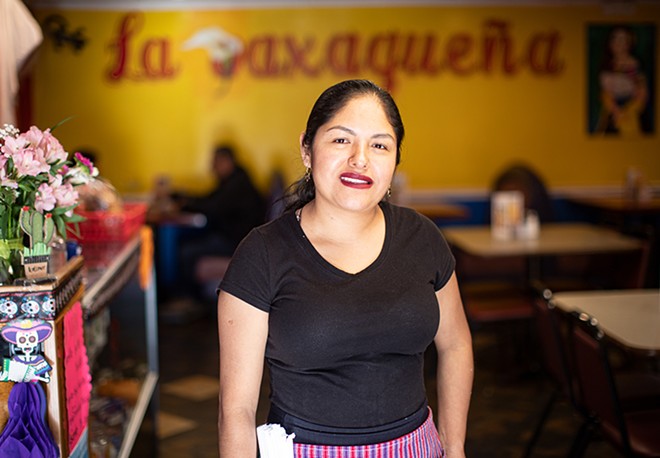 To satisfy her cravings, Soriano would cook at home, then bring in her dishes to share with her family and friends, as well as her restaurant boss and coworkers. They were so impressed that they encouraged Soriano to seriously consider opening her own business and even gave her a jump start by ordering dishes from her for holidays and special occasions. Soriano soaked in their encouragement and dreamed of opening a place that would showcase traditional Oaxacan cuisine.

She started out small at first, selling her wares out of her garage while casually looking for restaurant space. Word quickly spread around her neighborhood, all the way to a man who owned a small strip mall on Lemay Ferry Road, not far from her home in south county. He had been looking for a tenant to take over one of the strip mall's long-vacant storefronts and was so impressed by Soriano's cooking that he asked her to consider it. It was the sign she'd been waiting for.

Soriano and her family took over the restaurant space in March of 2021, but because it had been unoccupied for so long, it took roughly a year to get the place in order. The family did all of the work themselves, transforming what they describe as a dark, drab former bar into a vibrant restaurant that greets diners with a bright red and blue facade — a stunning contrast to the otherwise gray strip of businesses. This color scheme carries into the dining room, where red, blue and yellow walls are crowned with multicolored paper banners. A handful of murals depicting Oaxacan scenes decorate the room; one includes the restaurant's name, complete with a lily over the "O" of Oaxaqueña designed by young Jose. 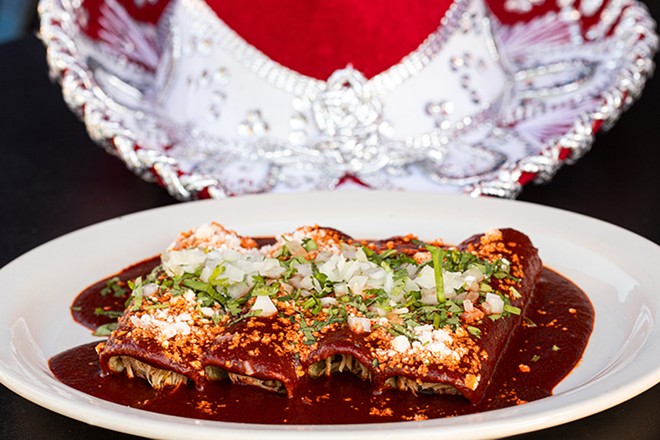 Mabel Suen
Enchiladas, here pictured with mole, handmade tortillas and pulled chicken, are one of the restaurant's many Oaxacan specialties.

The room's brilliant colors are a fitting setting for equally dazzling food. Though Soriano and her family offer a wide variety of Tex-Mex dishes, the heart of La Oaxaqueña is the roster of Oaxacan dishes based on her mother's recipes. An appetizer portion of molotes consists of five football-shaped masa fritters stuffed with a blend of mild chorizo and potatoes. Golden brown and slightly crisped, the corn-dog-like exterior yields to a doughnut-soft interior layer of fresh masa. Obviously, corn fritters should taste like corn, but the intensity of the flavor here is stunning, as if you have been eating corn in black and white and someone turned on the color. A topping of refried beans and queso fresco adds to the richness, while shredded cabbage and tomato salsa break it up with bite and crunch.

La Oaxaqueña's enchiladas verde are quite possibly the best version of the dish I've had in St. Louis. Handmade corn tortillas, which are more textured than the typical corn version, are stuffed with creamy queso fresco dip and baked with piquant green chile sauce that is the perfect balance of spice and tang. Its brightness is a pleasant counter to the picaditas, which pair blue-corn tortillas with a luscious concoction made from unrefined pork lard and refried black beans. The blue-corn shells are slightly thicker than a regular tortilla and are pinched along the edges, forming a somewhat pie-crust-shaped edge that acts as a cup for the lard, beans, and a topping of cheese, cilantro and chopped white onions.

Soriano considers the tlayuda to be the restaurant's signature dish, a point driven home by its impressive presentation. The dish — an oversized folded fried tortilla — is so massive it hangs over the edges of the substantially sized plate it's served on. The tlayuda's taste, however, is its most significant characteristic. The flour tortilla shell is thin and crispy like a lavash cracker and char-speckled like a Neapolitan pizza, then stuffed with the same pork-lard and black-bean filling served with the picaditas. La Oaxaqueña offers a variety of toppings, but the house specialty is the cecina, or marinated pork cutlet. Thinly pounded and the bright orange of a mandarin, the meat has such an intensely savory flavor that your mouth waters when you take a bite. 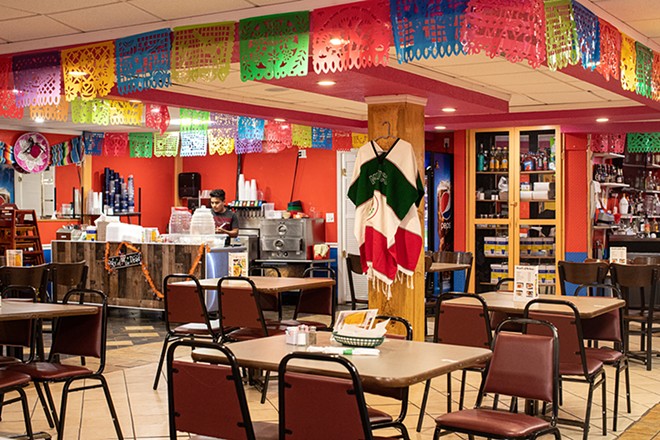 When you taste La Oaxaqueña's caldo de res, you feel transported to Soriano's mother's kitchen, where a steaming pot would fill the air with the aroma of slow -simmering beef bones for her son and daughter. Soriano credits her brother with evoking this memory through his version of their mother's soup; his capable hands create a delicate beef and mild chile broth that serves as the base for large hunks of slow-cooked meat, corn, green beans and potatoes. It's positively soulful.

However, Soriano's best homage to her mother's legacy is her tamales. Wrapped in plantain leaves that have been slightly charred by the oven, the tamales consist of shockingly creamy masa filled with pulled chicken soaked in red mole that tastes deeply of guajillo and garlic. Soriano recalls her mother making them on special occasions. Not an everyday food, these were saved for the family's biggest celebrations.

When you taste them, you not only understand why they were so revered by the Soriano family — you see why Jose feels his grandma's spirit throughout the restaurant.