Review: Mariscos el Gato Is a New — and Thrilling — Restaurant for Cherokee Street

Never, in my four decades of going out to eat, have I seen a dish receive a standing ovation. Effusive praise and misty-eyed adulation, yes, but a standing ovation even before one bite touches the lips? That's a new one.

Yet that is exactly what happened at Mariscos el Gato, the Nayarit-style seafood temple that opened on Cherokee Street last August. Our server had tried to prepare us for what was to come, noting that the sampler platter we ordered was massive and would surely feed all six people at our table. What he failed to mention, however, was that Neptune himself was in the kitchen preparing our feast.

And so there was a four-pound lobster stuffed with every bit of the sea's bounty, two different whole fried fish, shrimp diavalo, a crock of mixed seafood, another whole fish that had been filleted and fried, some stuffed shrimp, whitefish ceviche and an octopus cocktail, all surrounded by various accoutrements. The feast was so large, it required a roughly three-foot-long plate to contain it; seeing our server carry it in, we were genuinely concerned he might throw out his back making the trek from kitchen to table. The sheer scale and beauty of what was laid out before us was so incredible that every last one of us gasped — then leapt to our feet and cheered.

It may have been my first time witnessing such a reception, but I suspect that Mariscos el Gato's owner Carlos Dominguez and chef Pedro Diaz get a similar one every day. Not only is the restaurant unlike anything else in town, it's completely unexpected. 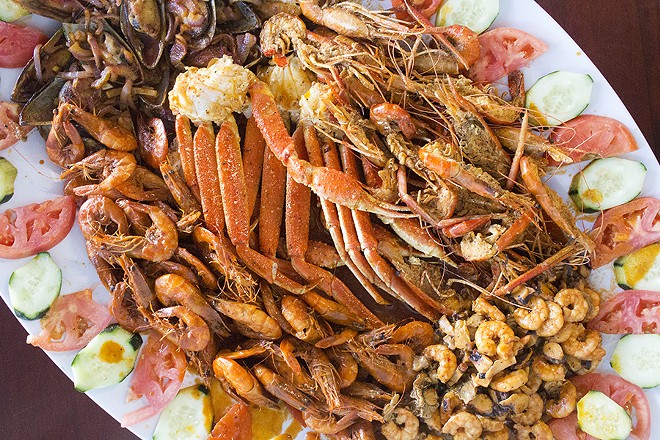 Set up in the storefront that has housed (in rapid succession) Mexcla, Tarahumara and Siete Luminarias, Mariscos el Gato initially appears to blend in with the other Mexican restaurants that dot Cherokee Street. The entrance is recessed, the name is not easily apparent, and a passing glance at the canoe set up on sawhorses out front might make you think you are passing a construction site.

Inside, the scene is no fancier. The owners have knocked down the wall of the adjacent storefront and expanded the space, but the gussying up has been minimal. Outfitted to look like a casual seafood shack, the walls are painted the color of seafoam, with nautical décor spread throughout. A mermaid statue keeps watch over the large dining room, which features the same simple booths and basic tables of the location's previous iterations.

The menu, however, provides the first clue that this is no casual, everyday sort of place. It's entirely in Spanish, so you might assume that the prices listed are in pesos. They're not. Entrees can run anywhere from $20 to $75 and $140 for the aforementioned seafood feast — a fact that would make your eyes pop out if your server doesn't explain that most dishes feed multiple people. Still, it's a bit shocking to find Clayton-level prices on Cherokee Street, especially at a place that looks like a spot to grab a Corona and a fish taco.

PHOTO BY MABEL SUEN
Each meal starts with a complimentary ceviche, served with tostadas and crackers.

That sticker shock dissipates when you realize the value. That's not just in quantity; far more important is the quality on offer, which begins with the first thing to hit the table. In place of standard chips and salsa, all diners are treated to a complimentary ceviche appetizer. On both visits, the day's selection was mild whitefish dressed with diced onions, fresh herbs and a mouth-puckering punch of citrus. Crispy tostadas and saltine crackers are meant for dipping, evoking that beach shack vibe.

Why buy the octopus cocktail when you can get the ceviche for free? Because it's positively outstanding. In a massive chalice, a whole octopus swims in piquant cocktail sauce. The meat is so tender, if you closed your eyes, you might think you were eating a scallop. Hunks of creamy avocado cover the top of a dish large enough to feed four people.

A basket of vibrant orange-hued empanadas doesn't look like much — until you break one open, and a creamy concoction of shrimp and scallops spills out over your plate. The filling has just a whisper of sweetness from the shellfish; combined with the subtle chili heat from the crispy dough, it's ethereal.

There is nothing subtle about what our server says is Mariscos el Gato's signature dish: a shrimp-stuffed whole red snapper. The fish is humongous — about a foot and a half long — and its center has been carved out and filled with jumbo shrimp, smothered in a fiery pepper sauce. The shrimp filling may make your nose run, but the snapper's delicate meat is a mild counter that balances the dish. 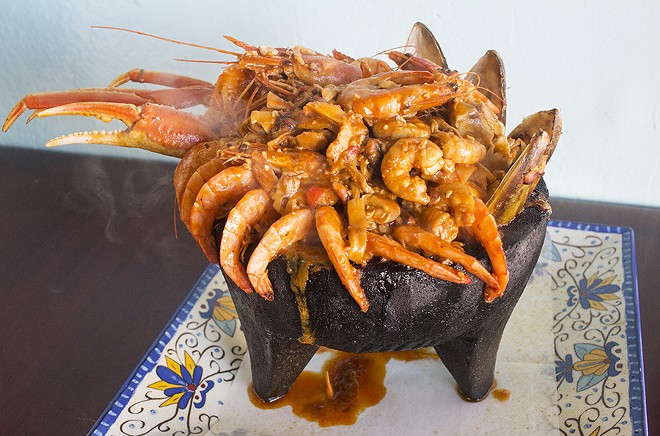 PHOTO BY MABEL SUEN
The "molcajete" refers to seafood served in a mortar.

The restaurant's other must-try, according to our server, is a pineapple half that's been carved out, grilled, overstuffed with a creamy mix of seafood and topped with molten mozzarella cheese. As someone who raises an eyebrow at cheese on fish (much less cheese on fish on fruit), I was a skeptic who was proven wrong. The seafood — clams, octopus, scallops shrimp and crab — is mixed with slivers of pineapple and tossed in a blend of cream and pineapple juice. It's not overly sweet, but the hint of fruit cuts right through the decadence.

A seafood stew, brimming with crab legs, mussels and shrimp, was as delicate as the finest seafood consommé you'd find in an elegant restaurant. The taste is light with just a hint of tomato, but a generous sprinkle of fresh cilantro gave it a fresh pop without overtaking the broth's flavor.

Mariscos el Gato's version of paella is positively outstanding. Tender, shockingly fresh fish of just about every variety fills the bowl, but the real treat is the rice. It almost evokes risotto, as it soaks up a mix of the seafood's cooking liquid. We balked at the $68 price tag, but the portion was large enough that six of us were able to eat our fill and even have some left over.

PHOTO BY MABEL SUEN
Previously the home of Mexcla and Tarahumara, the space has doubled in size with the addition of a neighboring storefront.

But I cannot forget that most impressive of seafood platters. Succulent tilapia and red snapper, simply roasted, could have been plucked straight out of the ocean. The filleted whole tilapia had just enough of a seasoned breadcrumb coating to give it a touch of spice and crunch without covering up the fish. Shrimp diavolo was smothered in a fiery red chili sauce with an addictive, tangy heat, while a seafood misto impressed with a richness that tiptoed right up to — but not over — the edge of overindulgence.

That overindulgence came in the form of the four-pound lobster, such a treat it makes the classic thermidor seem about as decadent as spinach salad. The lobster's cavity is overstuffed with possibly every last edible thing in the restaurant's kitchen — seafood, vegetables, herbs, even some hunks of pineapple. We were so overwhelmed by the bounty, we almost forgot to eat the lobster tail — something that by itself might run $40 at any other seafood restaurant.

By the end of the meal, though, we weren't worried about the cost. We were too far in an ecstatic stupor to do much of anything. It's a good thing we gave our much-deserved compliments to the chef at the beginning of the meal — by the time we had finished, we were too dazzled to speak. 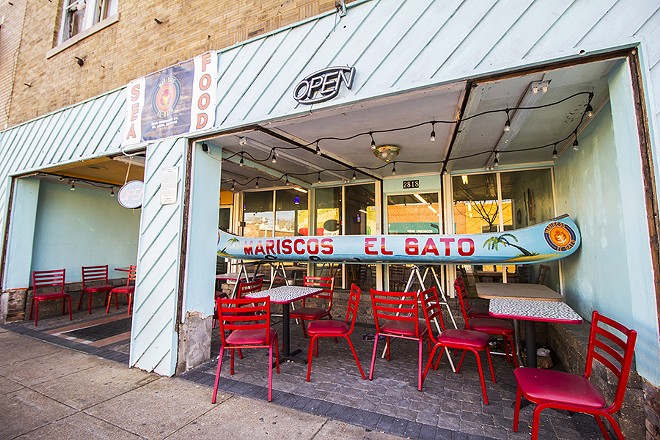 PHOTO BY MABEL SUEN
That canoe should give a clue at the seafood theme.