Review: Menya Rui Dishes up a Brilliant Universe of Ramen

Steven Pursley can't help but smile when he hears people freak out about ramen eggs. Soft-boiled with a silken exterior and cut in half to reveal a custard-like yolk, they are what many people assume is the show-stopping ingredient in a perfect bowl of ramen. Yet it's one of the last things that Pursley concerns himself with at his six-month-old ramen shop Menya Rui (3453 Hampton Avenue, 314-601-3524). It's not that he doesn't like eggs — he admits they are a delicious, sexy topping. However, to overly concern himself with the final component of a multifaceted endeavor would be to defeat the whole reason why he opened Menya Rui in the first place.

Beginning with one of the chef's least concerns may seem like an odd approach to writing about a restaurant. However, the key to understanding the importance of Menya Rui to the area's — nay, region's — food scene is acknowledging just how much it allows diners inexperienced in the nuances of Japanese noodles to push past their ideas about what a bowl of ramen should be and open themselves up to a world far more complex than they might have otherwise imagined. As Pursley explains, discovering the varieties of ramen is like realizing there is more pizza out there than just New York style.

Pursley admits he was just such a ramen novice when he first considered opening a ramen shop many years ago. Born in Okinawa to a Japanese mother and American father, Pursley's foundational experience with Japanese noodles centered on the island's particular style of soba. When he was still a kid, he and his family moved to Union, but they would make it back to Okinawa roughly once a year, where he would reconnect with the buckwheat noodles that he'd grown to love. He had ramen here and there — mostly in Tokyo when he and his family were passing through en route to Okinawa — but it remained a relatively mysterious dish he just caught glimpses of and never quite experienced in all of its varied glory.

He'd become intrigued with ramen as he was nearing the end of his college career. A political science major without a clear plan of what to do following undergrad, Pursley considered law school, even though his heart wasn't in it. He'd been cooking for a few years but never seriously thought about kitchen work as a career path, instead opting to enroll in an engineering program at a community college in Franklin County. On day one, he looked around, realized it was not for him and decided to do something drastic: He'd move to Japan and learn all that he could about ramen with the ultimate goal of opening a noodle shop here in the States.

Menya Rui is the culmination of the three years Pursley spent in Japan, soaking in as much knowledge about ramen, noodles and Japanese culinary culture as he could. He admits his knowledge of ramen was virtually nonexistent before moving overseas — limited to eggs, meat and toppings. But once he got into his jobs at two different ramen shops in Okinawa, and eventually at a Michelin-starred restaurant in the city of Matsuyama, he began to grasp the dish's fundamentals: tare, stock, aromatic oils, noodles and, finally, toppings.

In 2017, Pursley returned to St. Louis where he worked in front-of-house jobs while perfecting his craft with the ingredients he could find here in town. A year later, he did his first unofficial pop-up for friends in his apartment, then kept doing them until he began to catch buzz for his excellent ramen. While working in the kitchen at Indo, Pursley procured a commercial noodle maker from Japan and, with that increased capacity and access to Indo's kitchen and dining room on its closed days, was able to do even more pop-ups in preparation for opening a shop of his own.

Pursley opened Menya Rui in April of this year, a launch that generated a great deal of hype, characterized by eager guests who regularly line up before the shop opens to secure a seat. These queues have not dwindled over time, and once you taste Pursley's hauntingly delicious food, you understand why it's worth the wait. Even before your first slurp of noodles, Pursley dazzles with snappy housemade cucumbers — both a razor-sharp dill and sweeter, more bread-and-butter style — that electrify the palate. It's the perfect teaser course before the outstanding karage, or Japanese fried chicken, appetizer. The golden skin is crisped to a flawless, crunchy texture and served with a side of luscious Kewpie mayo.

However, noodles are the main event at Menya Rui, and Pursley proves he is worthy of a championship title. Pork shoyo is glorious thanks to its soy-based shoyo broth that mingles with chicken stock and rendered pork fatback to form a soulful nectar with just a whisper of sea flavor. Pursley fills the bowl with the broth and handmade noodles, then tops it with a slice of succulent pork shoulder chashu and menma (fermented bamboo shoots), infusing it with additional layers of funk and ocean flavor.

Though Pursley's tantanmen ramen uses the same broth as the pork shoyu, the liquid magically transforms into a vastly different dish. Here, chili paste and sesame oil conspire to form a deeply earthy warmth. Noodles, ground pork, menma, scallions and bean sprouts are all infused with this outstanding flavor. 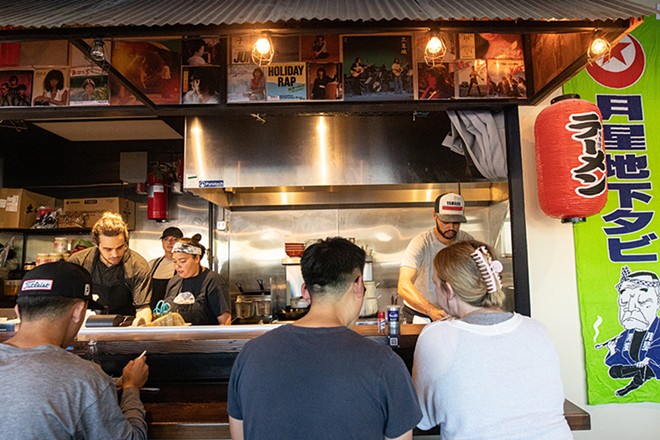 Mabel Suen
Diners get a front-row seat to Pursley and his team as they prepare their dishes.

Pursley does not rely on his otherworldly broths to make a good bowl of noodles, though. He offers the tantanmen — in all of its chili-sesame glory — in a brothless style as well. If you wonder why you're reminded of Chinese noodles when feasting on this masterpiece, it's no coincidence. The dish's Szechuan roots shine through brilliantly.

Menya Rui's other brothless offering, the original aburasoba, uses a thicker noodle that is coated in a stunning scallop oil and a trace of shoyu. The depth of sea flavor and umami funk is positively stunning, and is underscored by the addition of gyofun, which is a dry fish powder that turbo-charges the beautiful ocean depth; pork chashu and scallions that have actual snap adorn this hauntingly beautiful bowl.

St. Louis is blessed with a couple of outstanding ramen shops that do a fantastic job with their particular niche. What Menya Rui adds to the conversation is a portal to an entirely new world of Japanese noodles — one that Pursley has done a spectacular job presenting to us from his little shop. That he can contain so much brilliance in a small storefront should be no surprise; he's able to pack a universe of flavor into a bowl. 