Review: Mona's Brings an "American-Italian Joint" to the Hill

In the year Modesto opened its doors and introduced diners on the Hill to tapas, Food & Wine was touting heirloom beans and trash fish as some of the year's hottest culinary trends. Bubble tea was new to the U.S., and seemed utterly foreign. Rachael Ray made her first appearance on the Food Network.

In a business where all too many new restaurants go under before reaching their first anniversary, fifteen years is a shockingly long run. That Modesto was able to thrive for so many years is impressive. Still, denizens of the St. Louis dining scene let out an audible gasp last August when Brendan Marsden broke the news that he would be closing the beloved Spanish eatery.

Then he informed the dining public that he would be rebranding the space as a pizzeria, and shock turned to disbelief. Another Italian joint on the Hill? It seemed like the last thing the neighborhood needed.

Marsden took pains to assuage his loyal patrons' fears. His new place, Mona's, would be less an Italian restaurant, and more a vehicle for presenting American comfort food dishes in a new way. The restaurant's tagline, "an American-Italian Joint," drove his point home: Yes, it would be Italian, but to paraphrase our Dear Leader, it would also be America first.

In that sense, Mona's is just like Modesto: Different than anywhere else currently serving food on the Hill. Whether it's what the neighborhood needs, however, is a matter of debate.

PHOTO BY MABEL SUEN
The space is airy and light.

Like Marsden's other restaurant, Clayton's Whitebox Eatery, Mona's is a stylish space with polished branding that looks tailor-made to be a modern chain. Modesto's darkly painted walls and exposed brick have been whitewashed with a steel-blue border. Those same colors can be found on the checkered tablecloths, which are surrounded by bright yellow chairs. The wood-accented expo area is open; above it dangle whimsical light fixtures made from metal cheese graters. The scene evokes an inviting, country-style beach cottage.

Service is equally welcoming, and I especially commend the man (I assume the manager) who on one visit went out of his way to make my very fidgety daughter feel welcome. She's still playing with the Wikki Stix he dug out of the coat closet for her.

The food, on the other hand, is hit or miss. When dishes worked, they provided the sort of easy comfort that Mona's aims to make its hallmark. Pillow-soft garlic knots, a warm, doughy hybrid of beignets and yeast rolls, are presented alongside a crock of velvety provolone fondue. Hunks of tomato confit, placed in the center, are more than a simple garnish. When mixed in, they brighten the cheese sauce that clings to and coats the knots. You can't help but wonder why all the other Hill restaurants have been wasting all their energy on plain old cheese garlic bread.

Fried zucchini sticks are equally well-prepared. The vegetable is pickled, cut into thick strips, then deep-fried in crunchy, Parmesan-dusted batter and served with buttermilk dressing for dipping. While the pop of brightness from the vinegar is a welcome addition to this bar food staple, I was even more impressed that the zucchini remained snappy — usually it devolves into mush when fried, but in this case, it had impeccable texture.

Pickled gulf shrimp, another Southern-inflected appetizer, arrive in a mason jar brimming with whole chilis, onions and a garlicky, mouth-puckering pickling liquid that begs to be sopped up with the accompanying thick-sliced bread. Even when I was out of shrimp, I couldn't stop myself from drizzling this delicious sauce over the remaining pieces of buttery toast.

Baked eggplant caponata, however, was less impressive. Inexplicably, it tasted like it contained no eggplant. This bland dish, which presented as a poor version of tapenade, was the least successful of the appetizers — that is, unless you count the grilled Caesar salad. Though I appreciate that the char-kissed lettuce retained a crunchy texture, the dressing was flat and tasteless.

Mona's thin and crispy Roman-style pizza crust is the gourmet answer to Imo's, a delicious canvas for the restaurant's specialty red or white-sauced pies. Unfortunately, they were not always so deserving. Zesty tomato sauce, basil, toasted breadcrumbs and garlic confit combined for a pleasant taste on the eggplant parmesan pizza. I just wished there was more of these toppings — and more cheese as well.

I was impressed by Mona's way with a chicken: It's one of the few places to have figured out how to serve this meat on a pizza without it becoming jerky. That should have made the chicken pesto pizza a success, but the oven-fried tomato pesto was so sparse I wonder if it was forgotten. Its presence would have elevated the dish.

The sausage and kale pizza, however, is generously coated with its toppings and benefits from the gentle earthiness of garlic confit cloves. Still, a spicier sausage or zestier sauce would have provided a transformational oomph. It has the bones to be a standout, but as it stands, it's a bit bland.

In the meantime, Mona's best pizza is the one that I wrongly assumed would be a tragedy: the muffuletta. Salami, mortadella and coppa are layered atop tangy red sauce; the fatty meats render when they're cooked, slicking the pie with a spicy jus. To counter this richness, fiery giardiniera salad is sprinkled atop the finished product, giving the dish a beautiful punch. And because Mona's thin crust crisps up so nicely, it was able to hold all of this without collapsing.

Of Mona's fresh pastas, the namesake lasagna is the most enjoyable. Sausage-spiked tomato sauce is layered over lasagna noodles with béchamel and cheese. Roasted mushrooms were there too, though they didn't add much to the otherwise solid, cheesey-baked classic. 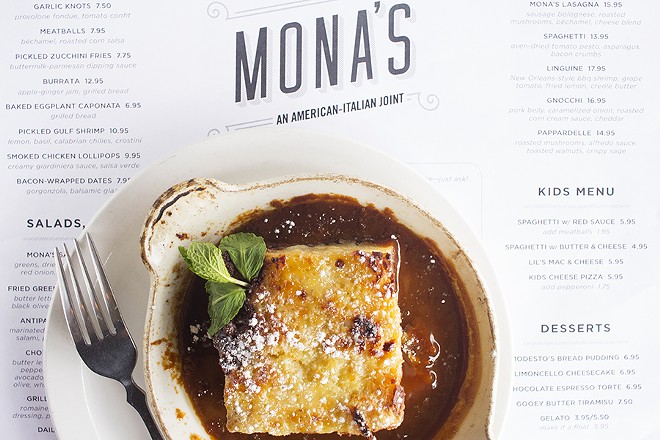 PHOTO BY MABEL SUEN
Desserts are a highlight.

The gnocchi, on the other hand, was a disaster. In place of what should have been the potato pasta were gluey, tasteless glops of ... I'm not sure what. I looked at the menu after they were served, seriously questioning whether I had been given chicken and dumplings by mistake. Alas, there was no such dish on the menu. The pork belly that was mixed in with the "gnocchi" made me double check — the stringy meat sure seemed like over-cooked chicken. The components swam in a bland, roasted corn cream sauce that did little to redeem this dish.

Aside from the thick, tough pasta, a paparadelle dish did have some redeeming qualities. Roasted mushrooms and toasted walnuts infused the rich cream sauce with a note of earth, and fried sage leaves perfume the dish. A generous sprinkle of roughly ground black pepper gives just enough punch to counter all of the cream without competing with it. With a better-prepared pasta, this dish is exactly the bowl of comfort you want in the middle of a dreary St. Louis winter.

Desserts, however, are perfect as they are. In place of mascarpone, gooey butter cake is layered atop espresso-soaked ladyfingers, forming Mona's beautiful gooey butter tiramisu. And the bread pudding, a recipe from the Modesto days, reminds us why the restaurant was so beloved. The caramel sauce that drenches the soft, buttery confection is simply outstanding.

Food trends come and go and restaurants change, but that bread pudding will always have a special place in my heart. That it's a carryover from Modesto says something about Mona's, for sure, but I wonder if rather than suggesting disappointment with the new iteration, it's instead a reason to have hope for the place. It shows that Marsden knows how to give the neighborhood what it wants, even if much of what he's serving at Mona's still needs to make the case. 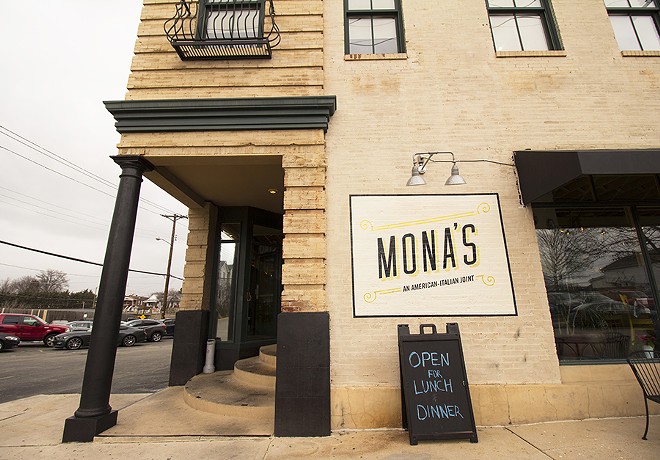 PHOTO BY MABEL SUEN
The restaurant is located in the space that previously held Modesto, on the Hill.