Review: Moya Grill Shows How Delicious Fast-Casual Food Can Be

Guy Fieri. There he was, in all of his goateed, frosted-tipped glory, invading my dinner at Moya Grill. Had the bus to "Flavortown" taken a detour? That was the only explanation I could imagine for his presence on the lone television screen at the four-month-old Ethiopian restaurant.

Moya Grill, after all, is no diner, drive-in nor dive, but rather a bastion of East African cuisine in the Delmar Loop, about as far removed from donkey sauce as you can get. That the eatery's two employees stood watching the program as if transfixed by morbid curiosity was jarring — but nothing could be more antithetical to the food they had simmering on their stove.

The name "moya" comes from the word for an individual skilled in cooking. And while Fieri's worthiness for that sobriquet is up for debate, there's no doubt that owner Atsede Wondem qualifies. She's given the restaurant its name not only in reference to herself, but to the generations of women from whom she learned to cook, in particular her mother.

Since 2007, Wondem and her husband Henok Gerbi have been serving up her old family recipes at their South Grand restaurant Meskerem. As the town's gold standard of Ethiopian cuisine, the formal, sit-down restaurant has given the pair a great deal of success. Seeing the boom in the fast-casual market, they realized that Ethiopian fare was tailor-made for such a dressed-down concept.

But while Wondem and Gerbi have eschewed Meskerem's formality, they did not sacrifice style in the process. The handsome restaurant is filled with inviting contemporary touches. The walls are a combination of rustic, light-colored wood and black paint with murals of gold-hued East African figures. Long wooden tables and black chairs dot the tiny space, which previously housed the short-lived Al Forno E pizzeria and before that, Gyro Grill.

If you're familiar with Meskerem's menu, many of the dishes will look the same, though the presentation is a bit different. The traditional Ethiopian style of dining features multiple items served on large communal platters atop injera, the spongy, sharply sourdough-tasting bread that is a staple of Ethiopian food. Moya, however, follows the one-person, one-dish model, which makes much more sense in a setting like this. You can choose to have your entree prepared over rice or served with injera. If you go the injera route, it comes rolled up on the side, and you're encouraged to use it to pinch up pieces of your dish by hand.

That injera is also the best way to enjoy Moya's main courses, like the doro wot. The menu claims this is a famous celebration dish, and it's clear why. Hunks of boneless, fork-tender chicken thigh are stewed for hours in a mélange of ginger-spiked tomatoes and exotic spices. The stew is as rich and meaty as a Bolognese sauce, with the warmth of masala or curry — the heat is subtle, but it creeps up on you. A few halved hard-boiled eggs bob in the dish and are infused with the spicy flavor.

Moya Grill offers several vegetarian entrees, including a lentil stew that can be prepared either mild or spicy. The former is infused with turmeric; the latter has so much red chili it makes the nose run. "Healthy Greens" consist of slow-cooked collards and kale that have so much depth of flavor, you'd think they were actually unhealthy greens. A stew of green beans and thick-cut carrot rounds simmered in tomato sauce is shockingly delicious, and the creamy chickpeas, rustically mashed with lemon and jalapenos, give hummus a run for its money as the dominant garbanzo dip. You can order these individually, but a combination platter — served on request — gives you a little bit of everything. It's the only way to go with so many delectable options.

In addition to the stews, Moya Grill serves classic Ethiopian tibs, or grilled and sautéed dishes. The chicken version is excellent, like East African spiced fajitas served sizzling with bell peppers and onions. The juice from the meat and spices forms a peppery and garlic-heavy glaze that begs to be sopped up with injera. The same preparation works wonderfully for tofu — the neutral bean curd soaks up every last bit of flavor like a sponge.

Though Ethiopia is nowhere near Central America, the beef minchet k'ay is shockingly similar in both texture and flavor profile to taco meat. Cardamom and basil-spiced beef, prepared to the consistency of a fine forcemeat, is meant to be scooped up with injera. The meat's spices warm the back palate while the tart bread cuts through its richness.

Moya Grill serves a handful of appetizers, including the excellent sambusas. Two triangles of deep-fried dough are stuffed with mildly spiced ground beef that is so juicy you don't need a dipping sauce — or at least that's what you think until you taste the accompanying piquant salsa. The tomato-based condiment is an addictive cross between chili paste and the tamarind chutney you get at an Indian restaurant.

If the beef minchet k'ay is kinfolk to the taco, Moya's avocado salad is so similar to guacamole you'd be forgiven for doing a double take and thinking you were actually at a Mexican cantina. Just don't look for tortilla chips. The refreshing concoction of mashed avocados, tomatoes, bell peppers, onions and olive oil is meant to be eaten simply with a fork or scooped up with pieces of injera.

Unlike Meskerem, Moya Grill offers two handheld options. The "Gabi Wrap," filled with a mixture of finely minced beef and mashed fava beans, is brightened by lettuce and tomatoes dressed in herbs and olive oil, while the "Foole Sandwich" is filled with mashed fava beans, wrapped with olive-oil dressed lettuce, tomato and bell peppers.

The two sandwiches confused me on my visit. Calling the Gabi a wrap seemed like a misnomer, as it was served atop crusty white bread like an open-faced sandwich. I later found out this was a mistake — it was supposed to be wrapped in an injera-lined tortilla. This would have been a much better presentation, as the beef and beans were quite mushy on such fluffy bread.

The kitchen also messed up my order of the Foole Sandwich: It came wrapped in the injera-lined tortilla, even though it was supposed to be served atop the crusty bread. This mistake, though, was a welcome one. Served this way, it felt like the East African answer to a falafel, with filling the consistency of a mashed chickpea fritter, heavy on the lemon. If Wondem and Gerbi are looking for their fast-casual staple, this is it.

But even if that's one of the few dishes that would lend itself to being eaten on the road, there isn't much about Ethiopian cuisine that doesn't fit the fast-casual model. These dishes are ready quickly and, thanks to the injera, don't even require a knife and fork. In light of how flavorful this style of food is, it's a welcome addition to the sometimes bland pantheon of quick-service options.

Hey, maybe Guy Fieri makes sense after all. Moya Grill may be miles from a diner, but this really is Flavortown. 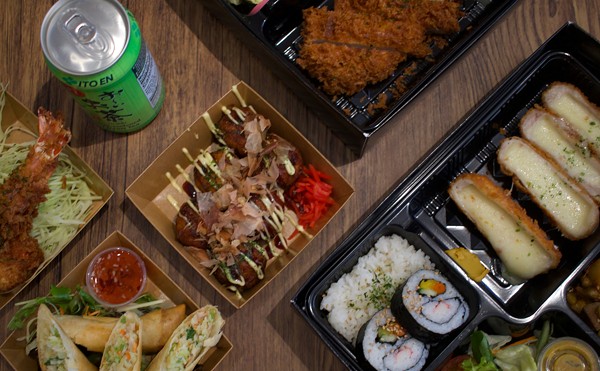