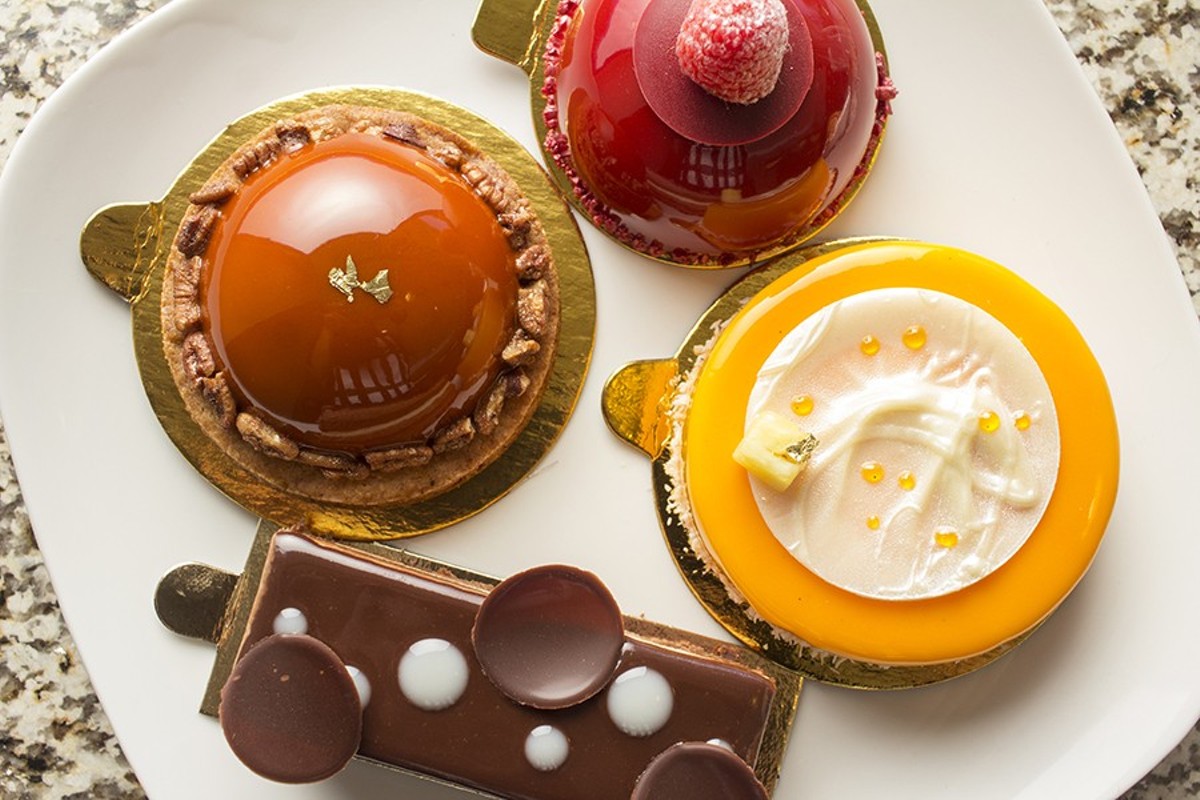 If savory cooks are the hard-partying free spirits of the kitchen, then pastry chefs are the careful scientists. You learn this pretty quickly if you've ever tinkered around with a recipe. It's not like adding some extra garlic or salt into a sauce — even the slightest variance in measurement can throw off the end product and result in culinary catastrophe. "You can't just wing it with pastry," a chef friend once told me. "It has to be precise. These are chemical reactions."

It's fitting, then, that Nathaniel Reid, one of the country's most acclaimed pastry chefs, came to his craft via the hard sciences. A biology major at Mizzou, Reid found himself in a professional crisis after an internship made him realize he was on the wrong path. His mom suggested that he get into cooking. Her idea seemed to come out of nowhere: Though he liked to cook and enjoyed food, it wasn't an obvious calling. As soon as she spoke the words, though, something inside him clicked.

Reid changed his major to hospitality and restaurant management, got a job in a kitchen, and begged his way into doing dessert specials when the restaurant's pastry chef quit. He laughs that his boss would have thought twice about his promotion if he'd seen the trashcan — for every success, he had numerous failures that were too bad to serve. His boss didn't notice or care; he was too busy watching Reid's desserts sell out every single night. 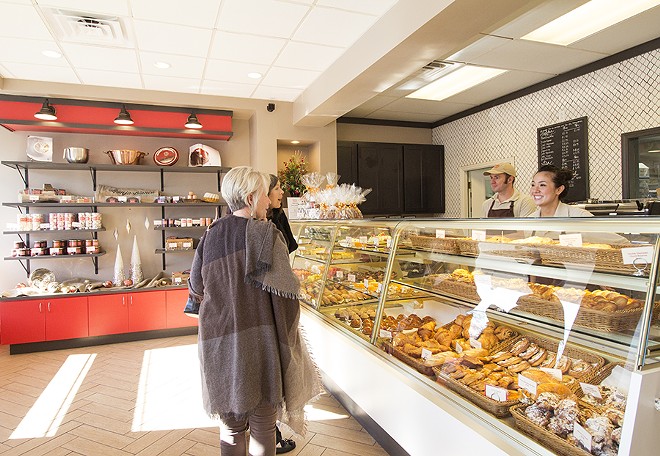 These days, Reid's wares are flying off the shelves at his own shop, Nathaniel Reid Bakery, which opened in Kirkwood in August. The place is his first solo venture, but it's hardly a freshman effort. Since graduating Mizzou, and the prestigious Le Cordon Bleu in Paris following that, Reid honed his craft at luxury hotels like the MGM Grand in Las Vegas (where he worked with the Michelin-starred Joël Robuchon), the St. Regis at Dana Point and the Ritz-Carlton here in St. Louis. He's traveled the world as a brand ambassador for Valrhona chocolate and Sasa Demarle non-stick cooking products and has racked up numerous accolades, including U.S. Pastry Chef of the Year at the 2010 U.S. Pastry Competition and one of 2012's top ten pastry chefs of the year according to Dessert Professional Magazine.

Reid, in other words, is a huge deal in the pastry world — to the point that a modest storefront in Kirkwood seems like a significant departure. Reid admits as much but says it's not only the realization of a dream, but the change he needed. "In the pastry kitchen at a hotel, I know the guest as nothing more a number," he says. "All I knew about a person is that they were 'order number 775' or 'table number 42.' That's not what this is about."

At Nathaniel Reid Bakery, the eponymous chef spends as much time behind the counter interacting with his guests as he does preparing their treats in the kitchen. He says that his biggest joy — greater than any accolade or professional award he's received — is seeing their smiles as they bite into one of his creations.

And at this superb pastry shop, those smiles are plentiful. How can you not burst into tears of joy after biting into his almond croissant? The buttery layers of dough are flecked with just enough almond paste and slivered almonds to infuse the pastry with the nut's amaretto-sweet essence without hitting you over the head. A dusting of powdered sugar adds a pop of sweetness to this magnificent treat. 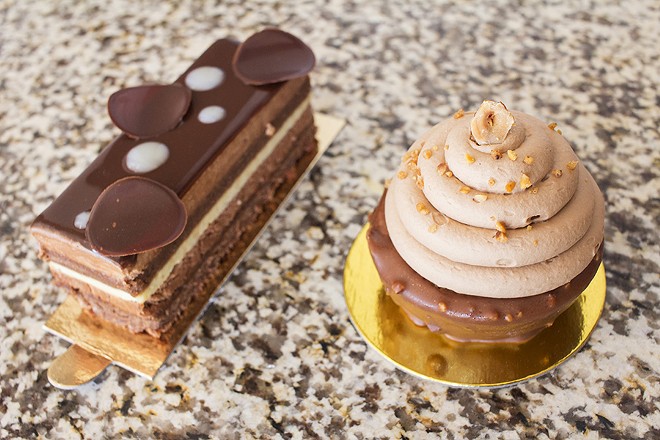 His chocolate croissant is equally restrained, balancing hunks of bittersweet chocolate with toasty layers of dough — as authentic as anything you'd eat on the Left Bank.

Reid marries his chocolate and almond croissants for his signature pastry. I assumed it would be too much, but I should never have doubted. Pieces of dark chocolate, almonds and a touch of almond paste are wrapped in dough that is crisp and golden on the outside, soft and buttery on the inside. It's brown butter meets chocolate almond buttercream in pastry form, and it's shockingly good.

His apple croissant is no less successful. Tart apples scented with baking spices are encased in layers of buttery dough and covered in streusel. Meanwhile, his cinnamon pecan roll is the ideal representation of the form: just enough pecans, cinnamon, sugar and butter in every single bite. There's no better version.

Reid's individual cakes are a window into the luxury side of the pastry world — luckily for us, it's a glimpse of the heights that can be achieved in taste, not price. For the "Spiced Pear Helene," a delightful almond crumble cookie is topped with a layer of salted caramel mousse and poached pears speckled like a mosaic in thick caramel cream and topped with chai tea Chantilly. The entire enterprise tastes like the sort of Christmas you see in a Pottery Barn catalog — you aspire to replicate it in your home, but you know you'll never get there.

However delicious the Helene may be, it pales next to Reid's "Amber Cake," a dessert so good it was selected for inclusion in a prestigious cookbook that honors the world's best pastry chefs. There's no question why the authors chose it. A luxurious silken dome of salted caramel mousse is gilded with pecan caramel. Caramelized pecans are sprinkled around the bottom of the cake, and the crust is a crunchy shortbread that would be good with or without the topping. The balanced taste is like a nutty, brown butter biscuit. Forget the saying "it looks too good to eat." It looks that good, but it tastes even better.

In addition to his sweet offerings, Reid offers a selection of sandwiches, salads and quiches for people to eat at one of the restaurant's few window seats or take to go on their way to work in the morning. His quiches are unbelievably decadent: The four-cheese version may as well be cheesecake, and the caramelized onion, bacon and gruyere balances salt, smoke, sweetness and velvety, custard-like richness. Both are baked onto his impeccable, buttery crust like a savory pie.

Sandwiches, like the grape- and pecan-studded Waldorf chicken salad and the turkey and cheese, have the benefit of being served on one of Reid's wonderful croissants. Surprisingly, they hold up well as sandwich bread, rather than flaking apart as I would've expected.

His Italian sandwich is a standout. Layers of Italian cold cuts are topped with lettuce, tomato and a giardiniera so spicy it will make your eyes water, yet it's tamed by the other components. Forget the Hill. This is the city's spot for an Italian sub.

Reid does not believe in perfection. In fact, he thinks it doesn't exist. "It's like I'm chasing something I'll never catch, but I'm still working toward it," he says. But while he may not want to deploy the "p-word," I've never seen a place where it would be more apt. Indeed, with pastries like these, I'd say he has his craft down to a science.

Turn the page for more photos of Nathaniel Reid Bakery.