Review: Parigi Is a Blissful Triumph in Clayton

I've fallen in love twice at Parigi. The first time was with my now-husband, though if you are being technical, it wasn't Parigi then. Back in 2007, the restaurant that occupied the second-floor dining room at the Clayton on the Park apartment building was called Finale Music and Dining, an ill-fated entertainment and dining venue where we both worked. He was the sous chef; I was the front-of-house manager and bartender. He hooked me with his béarnaise.

The second time around, this summer, it was Parigi's chef Ramon Cuffie and some housemade pappardelle that got me. I was hemming and hawing between a mushroom cresta di gallo and the frutti di mare when my server took charge. Both, she insisted, were outstanding, but if I had to get just one dish on the menu, I should opt for the pappardelle al ragu.

What arrived at the table may very well be the best pasta dish in St. Louis. House-extruded pappardelle ribbons, cooked to that perfect sweet spot where firmness just begins to yield, are tossed with a veal ragu. The sauce is tomato-based, though the slow-stewed meat and splash of cream make it as decadent as an alfredo. The ragu clings to the noodles like a Ted Drewes' concrete clings to its cup — hold up a noodle, and the sauce is so rich, it doesn't drip off. I've had Bolognese in Bologna, and this was better.

If I wasn't married, I might be asking Cuffie for his hand.

The pappardelle al ragu is just one of the many successes on display at Parigi, the Italian-French concept that is the brainchild of James Beard-nominated chef and restaurateur Ben Poremba. Though best known for his eateries in south city's Botanical Heights neighborhood — Elaia, Olio, Old Standard — Poremba ventured to Clayton for Parigi, taking on both a vastly different locale and a beast of a property. Not only is Parigi open for lunch and dinner, but Poremba is also providing breakfast hours, a coffee bar and room service for Clayton on the Park's residents.

It's a difficult setup, but Poremba and Cuffie navigate it with aplomb — and succeed with more than just the food. Between my time at Finale and its opening as Parigi, the building operated as a Sunrise Senior Living, and the restaurant space served as a dining room for the old folks. But you'd never realize that today. It's utterly transformed from both of its previous iterations.

It's also beautiful. The bright, vintage-style showroom is gilded with floor-to-ceiling windows that face Brentwood Boulevard. Gorgeous, old-time European cookware, antique serving carts and a copper espresso bar provide visual appeal. The kitchen is open, but it sits off to the side so you can peer in, more voyeur than interloper. If you tire of watching the show, you can look skyward at the mural of vintage Italian photos on the ceiling that simultaneously evokes Fellini and the Sistine Chapel.

Poremba conceptualized Parigi as an Italian restaurant set in interwar Paris — decidedly Italian, though refined by French technique. You'll see nods to both cuisines throughout the menu, though the appetizer selection leans toward Italy.

Arancini present as dreamy cloud-like poufs that have more in common texturally with mashed potatoes than with risotto. The rice balls are filled with red pepper and Taleggio cheese that punch through the richness. The exterior is coated in panko and a light dusting of more cheese for just a hint of crunch. Another Italian standard, ruby red carpaccio, benefits from the peppery bite of fresh watercress. Funky pecorino cheese and local mushrooms give the dish a pleasant, earthy undertone.

If I wasn't so enamored with the pappardelle, I'd still be dreaming of Parigi's bruschetta di caponata, a lovely Sicilian concoction of roasted eggplant, raisins, pine nuts and capers that hits every spot on the palate — bitter, sweet, tart, salty, umami — like a symphony. The caponata is cooked down to a tapenade-like consistency and generously spread over crusty bread. It's magnificent.

The bruschetta competes for my affection, however, with the tonno salad, described by my server as "probably the most summertime dish you could think of." She's spot-on. Shockingly fresh tuna, grilled rare, rests atop a salad of cannellini beans, fennel, celery and lentils. The result is so delicate and light, I can't think of a dish that better encapsulates dining on the Mediterranean, be it Nice or Amalfi.

The only dish at Parigi that failed to impress was the lattuga grigliata. Though I enjoy the bitter flavor of charred romaine leaves, I've had the dish properly executed just once — usually, as in this instance, the leaves break down too far in the cooking, and heavy Caesar dressing exacerbates the mushiness. Flavor-wise, the salad was enjoyable, especially the rich, oil-cured anchovy, but it wasn't enough to overcome the unappealing texture.

This was a minor blip in a parade of delights, though. The papparadelle proved to be not the only excellent pasta coming out of Cuffie's kitchen. Cheese-filled tortellini, tossed with peas, mushrooms and cream, is the quintessential cream sauce pasta. And the cooks at Parigi can cook risotto as expertly as they do pasta. The day's selection featured a simple summer squash version prepared so beautifully it should be on a culinary school syllabus.

I was surprised by the heartiness of Parigi's entrée offerings: Out of eight main courses, six are red meat. One of the outliers is a spectacularly roasted chicken. Crisp skin, succulent meat, a simple bed of bitter greens and a squeeze of charred lemon demonstrate the kitchen's cooking prowess — you can't fake something so straightforward.

I desperately wanted to try the bistecca Fiorentina, though my bank account could not justify the $110 price tag. I settled for the grass-fed New York strip, though settling is perhaps an unfair way to describe tucking in to such a beautiful piece of meat. Normally, I wouldn't cover it up with sauce, though the surroundings inspired me to try the béarnaise. My husband's will always be my first love, but Cuffie's recipe gives his a run for the money. The tarragon-spiked egg-based sauce here resides somewhere between solid and liquid, like a custard fluff. If this is Parigi's version of slumming it, I'm happy to go lowbrow.

Stracotto d'Agnello may not have been the most appropriate dish to order on a hot summer day, but it's difficult to say no to slow-braised lamb shank, especially one that falls off the bone with as little prodding as Parigi's. The meat rests atop grains that are soaked in Madeira-infused lamb jus, almost like gravy over mashed potatoes. It was so good I nearly forgot the blazingly hot summer day outside.

Normally, I would have been tempted by a dessert case filled with treats from La Patisserie Chouquette, but I chose to end my meal by instead finishing off a side dish of glorious, deep-fried potatoes. And once again, I swooned. These salty, golden-brown nuggets could make even Dr. Atkins fall in love with a potato.

There's just something in the air at this place.

PHOTO BY MABEL SUEN
The dining room at Parigi is a handsome one.

Turn the page for more photos of Parigi. 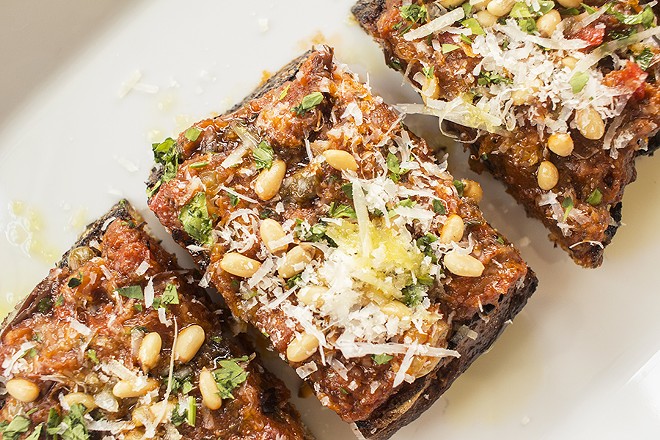 PHOTO BY MABEL SUEN
Parigi is located in the Clayton on the Park apartment building.
click to enlarge