The Neapolitan style pizzeria, inside the Food Hall at City Foundry, showcases all that a humble food stall can achieve 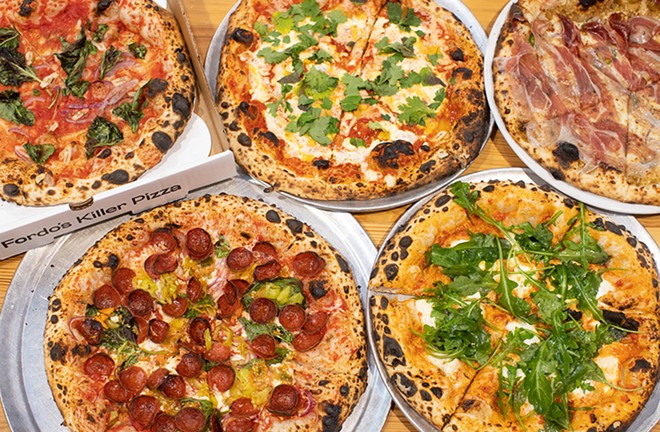 Joe Luckey describes cooking pizza in a wood-fired oven as akin to driving a stick-shift transmission. There's a lot of touch and go, feeling the dough out to get a read on how it's behaving on a particular day; assessing the fire to make sure it's hot enough and big enough to get the leopard spotting you want without burning the bottom of the crust; and feeling your way around the oven, which seems organic and alive. It's the reason he gives when asked why, as a chef well versed in fine dining, he decided to sign on to a seemingly simple pizza counter in City Foundry's Food Hall — and a major factor behind the creativity he brings to his Neapolitan-inspired pies at Fordo's Killer Pizza (3730 Foundry Way).

Luckey was a natural choice to lead chef and restaurateur Gerard Craft's City Foundry pizza project. After working for Craft at Taste and the French-inspired Brasserie in the Central West End, Luckey was tapped to lead the kitchen at Craft's Nashville outpost of his popular Clayton eatery, Pastaria, where he worked for two years before moving back to the brand's Clayton flagship. During his time at both Pastaria locations, he fell in love with the pizza station, where he considered making pies in the searing-hot wood oven the most fun he'd had in his culinary career. When Craft began sketching out a plan for a Neapolitan-style pizza kitchen in City Foundry, he immediately recognized Luckey as the person to help him carry out his vision.

Part of Craft's reasoning was Luckey's undeniable passion for wood-fired pizza. More importantly, though, he saw Luckey as someone who would find creative inspiration in the form rather than feeling confined by it. He encouraged Luckey to nail down the standards — a Margherita, a four-cheese, a pepperoni — but he then set him free to be as creative as he wanted with the concept. Empowered by that mandate and anchored by Craft's outstanding pizza-dough recipe, which was created especially for Fordo's, Luckey set off to transform a humble food counter into a bastion of pizza-based creativity. 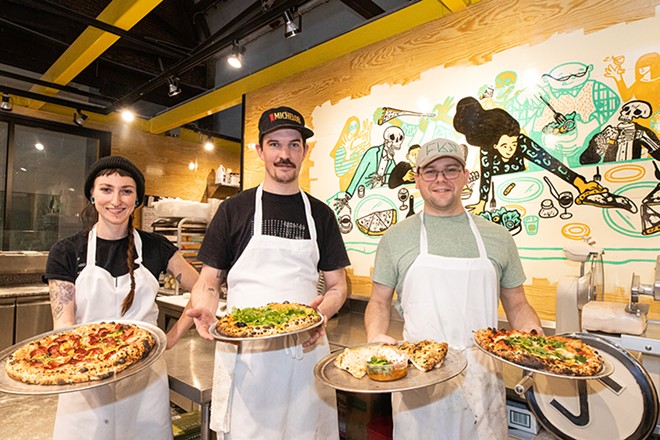 Luckey debuted his creations when Fordo's opened to the public this past May. Tucked into the far southeast corner of the food hall, the stall (or "kitchen," as they are technically called at City Foundry) has an out-of-the-way feel from the rest of the complex's hustle and bustle. The corner-lot-style setting is necessary due to the pizzeria's sizable oven: a massive wood Vesuvio oven made by the esteemed Italian manufacturer Gianni Acunto that looks less like a cooking device and more like a white stone trullo that dots Italy's Puglia region. It's a serious piece of equipment that draws your attention to the stall, but a beautifully deranged mural by artist Vidhya Nagara that's equal parts Eric Ripert and Glen Danzig gives an air of irreverence to the place. So does Fordo's playlist, fondly referred to by the team as "Wood-fired Bops," which plays throughout service.


Luckey notes that the playlist is a departure from other Niche Food Group kitchens — that at Craft's other properties, music is allowed during prep time, but once service begins, the radio turns off and it's time to get down to business. That Fordo's buzzes along to tunes throughout the workday captures the spirit of what Craft and Luckey wanted to achieve here: a whimsical, fun romp that is anchored by Niche Food Group's culinary philosophy, but is allowed to be playful thanks to the fundamentally joyful genre of pizza.

Hawaiian pizza captures this spirit. Here, Luckey begins with Craft's dough recipe, which leads to a master-level crust. Puffed up to a pillow-soft texture around the edges, yet soft and thin in the middle like a proper Neapolitan pie, the crust gets these perfect, blueberry-sized char spots that flake up to the point of breaking open but never actually cross that line. The char adds a beautiful, roasty bitterness to the otherwise nutty crust, and serves as a built-in counter to the Hawaiian's roasted-pineapple-sauce sweetness. Unlike a typical Hawaiian pie that scatters chunks of pineapple across the pizza, Fordo's caramelized tropical sauce permeates every bite and melds into the accompanying mozzarella cheese topping. Slices of Volpi Heritage prosciutto, shaved so thin they are translucent, cover every millimeter of the pizza's non-puffy-edge surface, blanketing the dish in salty luxury that's brightened by pungent red onion and jalapeño. It's a stunning riff on the form. 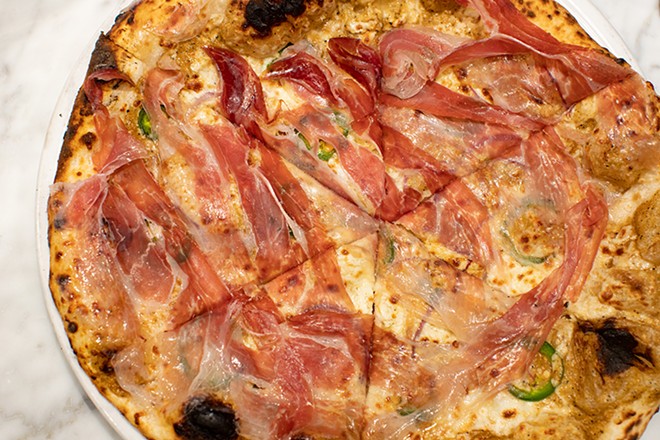 In place of a standard sausage pizza, Fordo's offers one made with hunks of gloriously rich, spice-laden beef sausage. Rendered fat from the meaty crumbles mingles with the zesty roasted tomato sauce and gilds the molten fontina and parmesan cheeses that cover the pie. Bell peppers, chives and sweet caramelized onions that are so soft you could spread them finish this magnificently satisfying dish.

One of Luckey's more creative turns is the shakshuka, a pizza rendition of the North African breakfast dish. Here, he begins by topping the crust with a warmly spiced red-pepper sauce that's typical of the traditional version of the dish, then covers it in egg whites before it hits the oven. He admits this is unconventional, but it's an approach that resulted from many failures, most of them involving cracking the whole eggs on the pie. By separating out the yolks and finishing the pizza with them when it comes out of the oven, he is able to cook the whites so that they form a beautiful coating that acts as a stand-in for a fresh cheese. Yolks, feta and fresh herbs are placed atop this base as soon as it comes out of the oven for a dish that is not only delicious but showcases the innovation that can come from even a humble food stall. 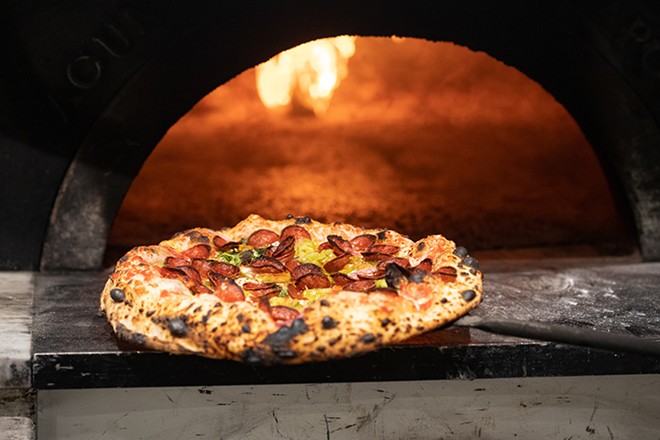 Luckey's more conventional offerings are equally successful. A Margherita pizza — the standard upon which all Neapolitan-style pizzerias should be judged — hits the mark flawlessly with its bright tomato sauce, rounds of fresh mozzarella and basil leaves. A four-cheese beautifully pairs mozzarella, Taleggio, fontina and parmesan with a drizzle of honey; its sweetness is a beautiful contrast to the cheeses' subtle funk. A wild mushroom pie smartly pairs the fungi with citrus gremolata to brighten the earthiness, and a quintessential pepperoni pizza captures the glorious cheesy, greasy comfort you want from such a concoction, all the way down to the pepperoni oil that pools in the sausage's slightly cratered slices. Paired with Fordo's luscious garlic confit puree, it's easy, decadent bliss.

Luckey describes the painstaking process of making that garlic puree. First, he confits fresh garlic cloves in butter, slow and low, so as to bring out the sweetness without the bitter burnt taste that comes from going too quickly. Like cooking a wood-fired pie, there's an art and a feeling to such an endeavor.

He also says that he got the idea for the condiment from Papa John's garlic sauce. If ever there was a better summation of this wonderful addition to the area's pizza scene, I'd like to see it.