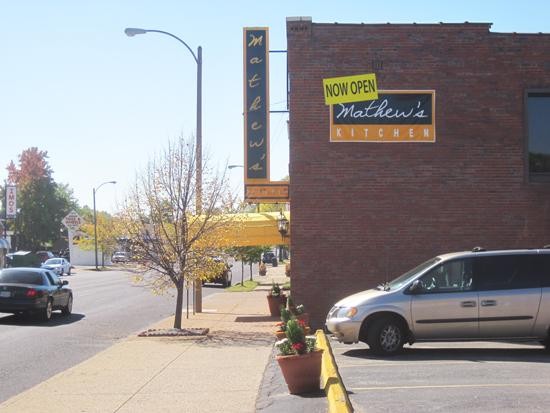 This week, I visit Mathew's Kitchen (5625 Hampton Avenue; 314-351-1700), which opened last fall in the former home of Del Pietro's. Follow me after the jump for a sneak preview of my review.

At Mathew's Kitchen, the menu lists a flatbread appetizer as "Not Pizza." Mathew Unger, the owner and chef of this four-month-old St. Louis Hills spot, isn't trying to split hairs. With tongue planted firmly in cheek, he's acknowledging the storied past of this south-city address. For 35 years it was home to Del Pietro's. Last summer owner Mary Rose Del Pietro, the matriarch of the family that owns Luciano's Trattoria, the Block, Sugo's Spaghetteria and numerous other area restaurants, announced her retirement. She closed Del Pietro's and leased the building, which she still owns, to Unger.

Long story short, Mathew's Kitchen isn't Del Pietro's, nor does it want to be. On the front of the building, a bright yellow sign with the restaurant's logo now hangs in place of Del Pietro's famous neon sign.

Check back here tomorrow morning to see what I think.