Natasha Bahrami serves up a worthy successor to Cafe Natasha's 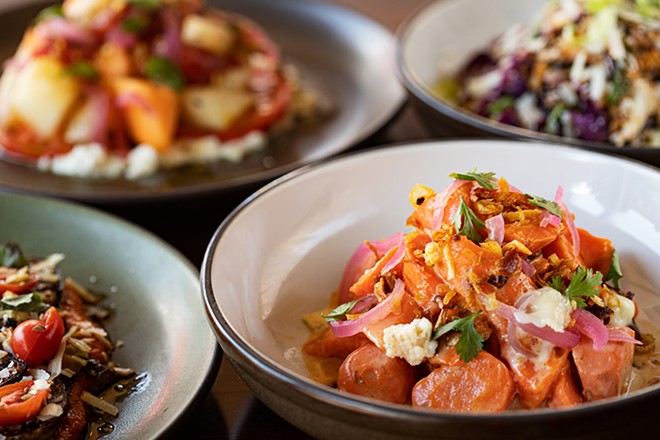 Salve Osteria (3200 South Grand Boulevard, 314-771-3411) may be less than four months old, but if you ask Natasha Bahrami, its seeds were planted all the way back in 2014. That's the year Bahrami returned to St. Louis from Washington, D.C., armed with an infectious passion for gin and a newfound desire to embrace a career in the industry she'd known all her life. As the namesake of the beloved Cafe Natasha's, Bahrami had always understood the restaurant was her birthright, but she was never quite comfortable with the idea of simply carrying on what her parents started four decades prior. She wanted to build upon it, certainly, but even if she did not know what that looked like, she knew one thing for sure: It would be on her own terms.

Bahrami founded the Gin Room in 2014 as a way to start defining her own role in the industry. Adjacent to Cafe Natasha's, the bar became an internationally acclaimed destination for the spirit, and Bahrami became a renowned gin ambassador. For eight years, the Gin Room and Cafe Natasha's ran as complementary concepts, but this past April, Bahrami, together with her partner in business and in life, Michael Fricker, were ready to watch the seed that had been planted nearly a decade prior blossom in its own right. The timing was right. Bahrami's mother, the vivacious Hamishe Bahrami, needed to retire after having spent the majority of her life toiling for the business. Like her daughter, "Mom," as she's known by her friends and guests, was ready to live life on her own terms. It was the push Bahrami and Fricker needed to make the dream that would become Salve a reality.

Bahrami and Fricker found the perfect partner to help them bring Salve to life. Matt Wynn, a chef whose culinary resume includes Tom Colicchio's Craftsteak and the former Central West End cocktail-focused restaurant Taste, was eager to join on to their project. Like Bahrami, Wynn was ready to flex his muscles in the industry; having spent his career working in support of others' visions, Wynn wanted to find his own voice. The three met and, in no time, realized that they all wanted the same thing out of a restaurant. At that moment, Salve was born.

Though Bahrami, Fricker and Wynn described Salve as both "harvest centric" (read: seasonal) and loosely Mediterranean focused in their opening press, they've come to see the restaurant as being defined less by food than by the experience they want to provide. No longer confined by Cafe Natasha's long shadow or, in Wynn's case, the particulars of the restaurants he's worked for, the partners are able to do things how they want to do them, untethered from anything but their own creativity. At Salve, this means a menu, cocktail list and experience that is ever evolving.

For Bahrami and Fricker, this means building upon the already thriving Gin Room, turning the interior and the lush outdoor garden space into a celebration of the art of beverage. Expanded lists, an Amaro pushcart and a service staff with an encyclopedic knowledge of libations will be on offer. 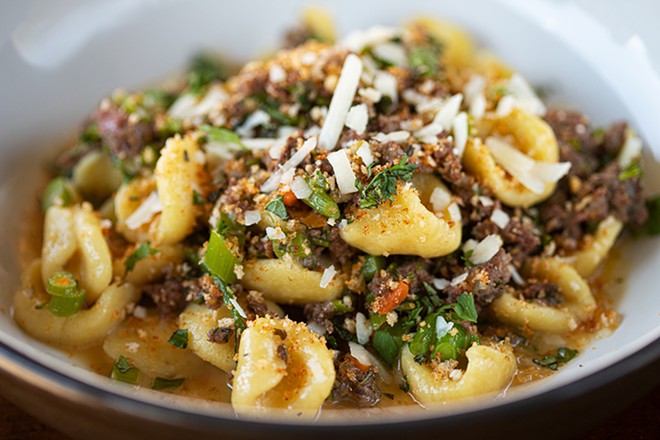 Mabel Suen
The orecchiette is served with lamb sausage and broccolini.

For Wynn, this means an opportunity to find his culinary voice through an Italian-leaning menu that is continually evolving; he tweaks and tinkers with the dishes to make things just right, resulting in an impeccable execution and thrilling flavors coming out of his kitchen. Bacon-fat carrots, for instance, make you rethink the level of satisfaction that can be coaxed from something plucked out of a garden. The bacon infuses the carrots with savory depth and slicks them with a rich, almost buttery coating, and funky blue cheese crema beautifully underscores the carrots' earthy flavor.

Beets, too, are magical — softened but not mushy and pickled so that their usually pronounced earthiness is toned down. Pickled orange adds a citrusy brightness, pistachios give the dish a nice texture contrast and a creamy ajo blanco sauce made from crushed almonds and garlic ties the dish together in a decadent richness.

If Salve already has one signature dish, it's the Salve Caesar, a stunning riff on the ubiquitous salad. Here, Wynn subs in grilled cabbage for romaine; the leafy vegetable holds up well to the heat and is infused with a gentle smoky taste. In place of anchovies, the dressing is made with miso bagna cauda; this gives the salad a powerful umami bomb, which is brightened by citrus and fresh scallions. Utterly addictive, this is the restaurant's must-try offering.

Mabel Suen
Salve Osteria’s Caesar salad is a must try.

A dish of meatballs has both the familiar comfort of Grandma's Sunday supper and a subtly non-traditional taste that keeps you interested. Here, Wynn blends chicken and beef and places them atop an unexpectedly spicy sauce — not overwhelming by any stretch, but the heat is there. This, paired with a gentle spice seasoning on the meatballs, makes the dish seem less Western and more eastern Mediterranean.

Salve's arancini itself is pleasantly typical of the form: Tender rice spheres the size of mandarin oranges are filled with mozzarella and zucchini. However, the thing that pushes this dish into the stratosphere is the accompanying date agrodolce, which stands in for the usual tomato sauce. This condiment is mindblowingly good. Richly, brown-sugary sweet, the dried fruit's stickiness is cut with vinegar, giving it a pop of tang, resulting in an otherworldly combination of sweet and sour. This condiment alone is a reason to put this dish on your Salve short list.

Wynn has an entire separate kitchen dedicated to pasta production, and his tagliatelle shows that he's put it to good use. This pasta is the embodiment of summer: Bright cherry tomatoes, cooked down enough to soften and release their juices without breaking down completely, are paired with basil oil and Parmesan cheese. The beautiful simplicity is breathtaking, whereas the deeply earthy complexity of the pappardelle is also magical. Here, Wynn plays with a vegetarian version of a classic Bolognese-style ragu, using a variety of mushrooms as a stand-in for beef, pork and veal. Just a touch of tomato sauce brightens the dish. If the pappardelle hints at the warm vibes of Nonna's kitchen, the ravioli drives it home in full force. Akin to an Italian-style chicken and dumplings, Wynn pairs ricotta-filled ravioli pillows so tender you want to nuzzle them with succulent braised chicken, escarole and dried tomatoes. A pan sauce that incorporates the cooking juices of each component provides an outstanding, savory nectar that begs to be soaked up with the ravioli.

Salve offers a few main courses that offer a more traditional entree experience as opposed to the rest of the menu's family-style vibe. Tuscan eggplant, spiced up with Calabrian chiles and accented with cherry tomatoes, ricotta and basil, provides a hearty vegetarian main course, while Wynn's take on roasted chicken — with harissa, yogurt and broccolini — offers a fun, North African twist on comfort food.

Salve could be considered a success based on any single component; food, drinks and positively outstanding service are individually exceptional. However, put together, they create an overall experience that is less a meal and more a transportive feeling that allows you to immerse yourself completely in the moment. There's no question that those seeds planted so long ago are not simply blooming; they have flourished into a Garden of Eden.