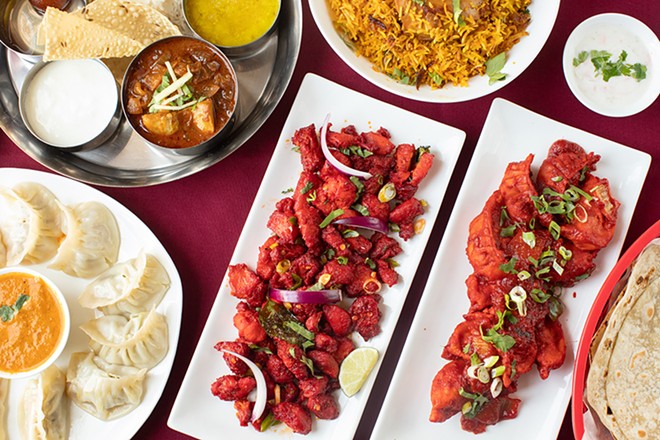 Like many novices to this particular region of cuisine, I wasn't sure of the differences between Nepalese and Indian food. Even within the countries themselves, there are variations and specialties from region to region. With so much complexity and nuance, it can be intimidating, even a little overwhelming. Both ingredients and flavor profiles can be similar. Some assert Nepalese food uses less ghee, cream and sugar, so it's often lighter than its Indian counterpart. Others say that the typical Nepalese meal begins with a curry and rice first and foremost. Perhaps the differences simply come down to the subtle choices of four or five spices or blends — such as garam masala, cumin and coriander powder — the chutney or the cooking technique employed.

If you ask Arzun Chuhan, chef and co-owner of Namaste Restaurant and Bar (4915 Hampton Avenue, 314-696-8585), he will agree that there is some truth to all these assertions, but he will also tell you that it is about the "taste of home."

Originally from Bhutan, Chuhan's parents immigrated to Nepal and, after nearly 20 years, realized their dream of coming to the U.S. in 2010 when they arrived in St. Louis with a teenaged Chuhan. Since high school, he's been working in the kitchens of Nepalese, Indian and Ethiopian restaurants around town where he developed his dream: to bring St. Louis his own take on the food of his upbringing.

It's a taste of home — but done his way.

Namaste's menu, which includes both Nepali and Indian dishes, shows the melding of Chuhan's previous restaurant experience with his Nepalese heritage. You can still order many Indian favorites such as chicken tikka masala, various vindaloos, tandoori dishes, biryanis and samosas. However, even with these popular Indian staples, Chuhan has added his own spin by approaching every dish from a perspective shaped by his background. 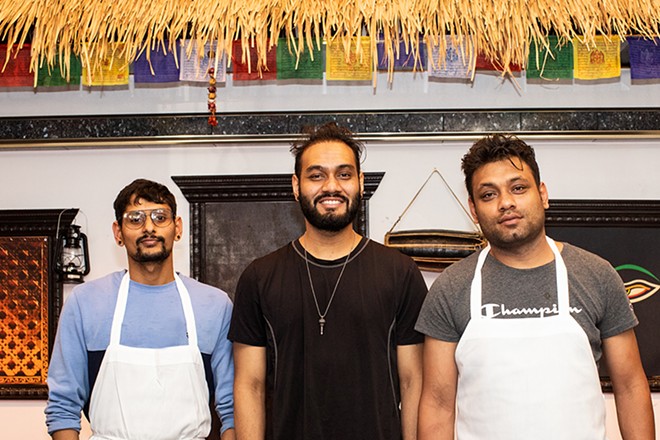 Take, for example, the Chicken 65, a popular Indian appetizer of pan-fried chicken in a spiced tomato sauce. My original plan was to stick to exploring Nepalese dishes exclusively, but I decided to throw this in the mix on the recommendation of my waitress Dwivida. Being a big fan of the spicy appetizer, I didn't need much convincing. However, what arrived at the table was a lighter, more tender version of what I had enjoyed countless times before. Spiced with a blend typical to the Nepalese style, it was delicious and unconventional. I couldn't stop eating the tender morsels of well-seasoned chicken. If this was any indication of what was to come, I was in for an exciting and delectable ride.

I knew it was imperative I order momos, the quintessential Nepalese dumpling. But I wasn't sure where to begin. Chicken or vegetarian filling? Steamed or fried with a chutney for dipping? Tossed in a spiced chili sauce (chili momo) or swimming in a flavorful and aromatic tomato-based soup (jhol momo)? I landed on trying two variations. First, I ordered the steamed chicken momos to get a pure baseline for the flavors and textures of the dumpling. The filling, which consisted of minced chicken, onion, herbs and spices, was moist and flavorful, and the simple flour wrapper was soft and chewy. It was served with a tangy chili chutney. For the jhol momo, I went with the veggie filling, which was as tasty as the chicken. The dumplings lay nestled in a bowl of reddish-orange, sauce-like soup that was light yet zesty with herbs and spices balanced with exactly the right amount of acidity. My verdict is that you can't go wrong with any of the momos — just make sure you order some. 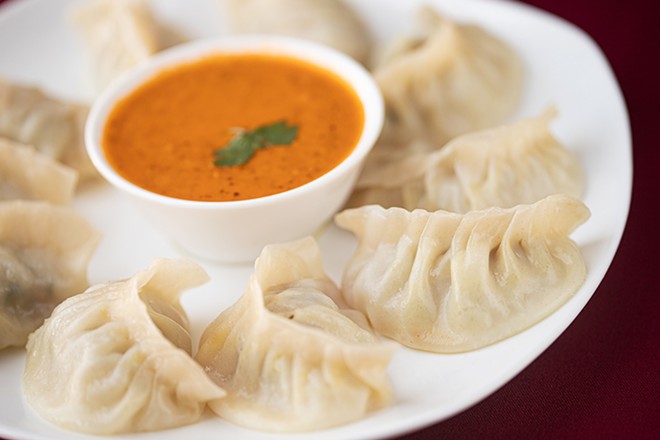 Mabel Suen
The jhol momo are served with a bowl of reddish-orange, sauce-like soup that is light yet zesty with herbs and spices balanced with exactly the right amount of acidity.

The chicken choila is another Nepalese favorite. Tender chunks of boneless chicken are marinated in lime, mustard oil and fenugreek, then tossed with onion, peppers, garlic and herbs. It can be served hot or cold. Either way, it is another example of a bright, savory course that won't weigh you down.

I came across chicken thupka several times in my research while preparing for my journey into Nepalese food. However, when I got to Namaste, I didn't see it on the printed menu. Because it was such a labor-intensive dish, it turned out they were only making it by request. Once I tasted the luscious, spice-filled broth, I immediately fell in love. Springy, chewy noodles rested just below the surface, and crispy chicharron-like bits of chicken lay on top alongside thinly sliced spring onions and cilantro leaves. I have a feeling that thupka will find its way back to the printed version of the menu once customers discover how heavenly this dish is.

I could not pass up trying a thali. Literally translating to "plate," this typical Nepalese meal has similar iterations in India, south and southeastern Asia, and even the Caribbean. Served on an emblematic silver circular tray, the thali is populated with little bowls, each filled with various components of the meal. Namaste's version starts with your choice of curry — vegetable, pork, chicken, mutton or fish — served at your desired level of spiciness. A bowl contains daal, a mild, yellow lentil soup, and another is filled with a tangy, cooling yogurt. Then there is one with gulab jamun, a milk pastry ball served in rose water and sugar syrup — a familiar dessert bite commonly found in both Indian and Nepalese meals. It's all served with rice, fresh cucumber, carrot, cooked lettuce and achar, a fermented seasonal pickle; a flaky naan flatbread; and papad, a crispy lentil wafer. Each component, save for the gulab jamun, is typically mixed together to create perfect bites. For example, the yogurt and daal can be used to balance the spiciness of the curry. 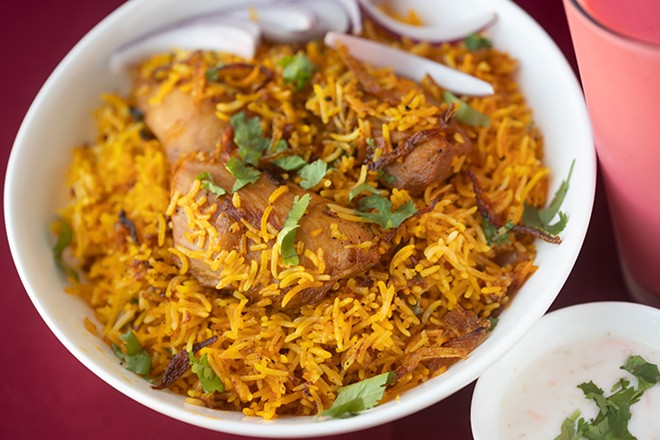 When Chuhan speaks of Namaste's food being a taste of home, it seems to me that what he is saying is that the food is about comfort, but not necessarily in the way that we might think. This isn't about heavy dishes that make you want to take a nap afterward. Rather, it's about flavors that are soulful and transportive. When Chuhan speaks of it "being done his way," he means that he has incorporated his perspective and voice into every dish — with each dish being driven by love, not ego.

Chuhan's menu and recipes are still evolving. Just over eight months into his first restaurant (which he runs with his brother Robert and several other family members), Chuhan urges his earlier patrons to revisit Namaste to see how the dishes have developed since opening. He also has exciting things planned for the Dashain and Diwali festivals, some of the largest Hindu celebrations, this October. Lastly, Chuhan is excited to announce the restaurant recently obtained a liquor license and will soon be introducing Indian beers, rums and whiskeys. I will be eagerly returning to work my way through more of the menu, learning more about Nepalese cuisine as well as Chuhan's perspective on it. 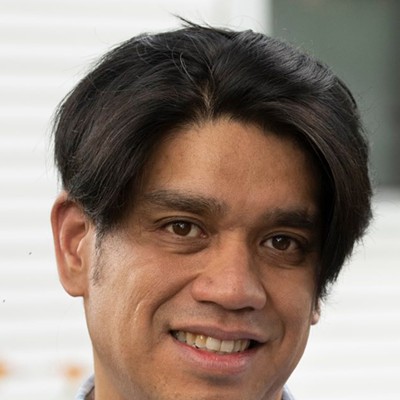