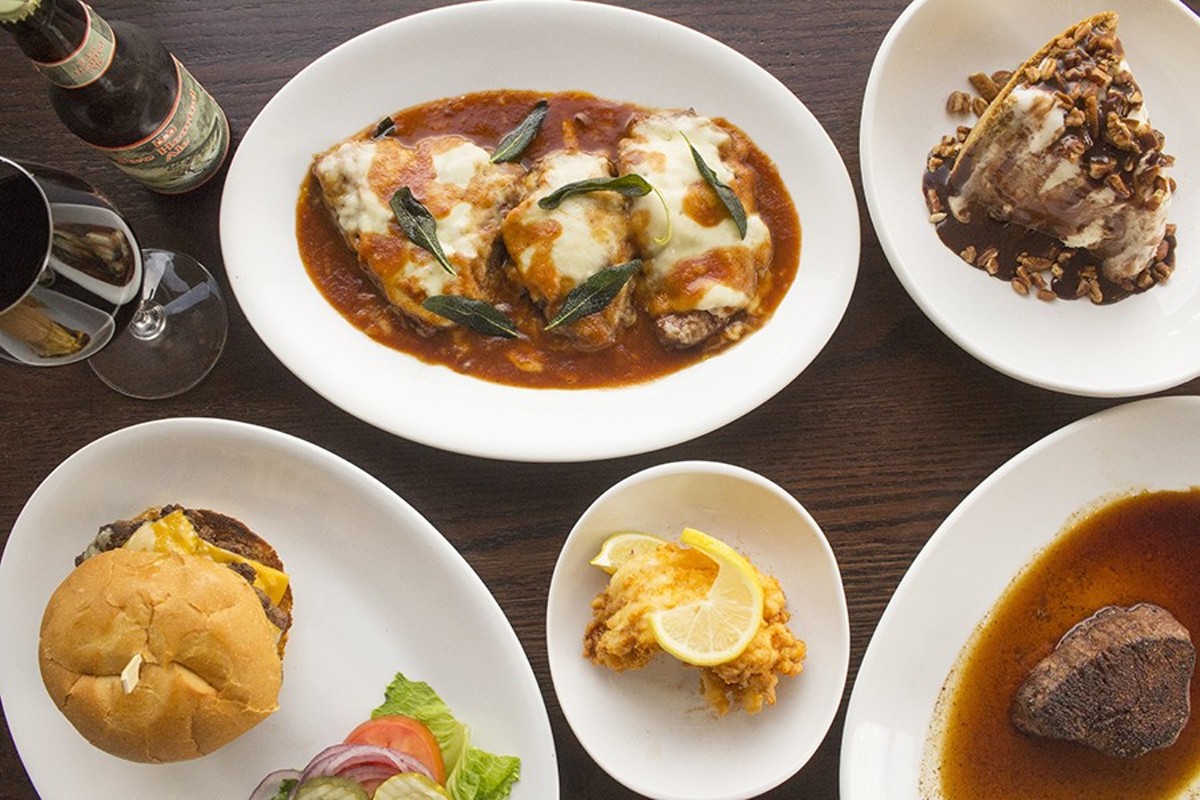 The large gray plaster arch that welcomes diners to Twisted Tree Steakhouse looks like any old entryway, but I'm convinced it's actually a wormhole. On the outside, the massive restaurant at the corner of Watson and Lindbergh appears to be nothing more than the latest mediocre occupant in a line of mediocre occupants (the biker-themed Mile 277, which closed in January, and a Viking conference center before that). The building is flanked by a Steak n Shake and a Fuddrucker's, and its placement in a Holiday Inn parking lot evokes the old Howard Johnson's motor lodge and grill concept.

Anything you think this scene reveals about Twisted Tree, however, gets checked at the door, as the fast food joints and chain stores of Sunset Hills give way to a sophisticated bar that could be a million light years away — or at least several miles to the northeast in Clayton. Dim lighting and sleek, backlit finishes illuminate the lounge, packed several people deep as would-be patrons wait upward of two hours for a table. Reclaimed wood, vintage signs and Restoration Hardware-style chandeliers carry through to the comfortable dining room, where waiters and their assistants push around old-school gueridon serving carts, and general managers, dressed in suits, work the room.

To say this was not what I had expected when I pulled into the parking lot is an understatement. Not knowing much about Twisted Tree's legacy, I was prepared for roughly the equivalent of Applebee's. After all, the four-month-old upscale steakhouse comes courtesy of the folks behind Syberg's, whose claim to fame is shark chunks, and Helen Fitzgerald's, which is known for, well, being Helen Fitzgerald's. There's nothing wrong with these places per se — they're just not the places you think of as sister concepts to a top-notch steakhouse.

That's where Pear Tree comes in. Before burning to the ground in 2012, the restaurant was an unlikely institution in Bevier, Missouri, drawing visitors from around the region to its century-old building in the middle of farm country. Pear Tree was known for its aged steaks, batter-dipped lobster tails and impeccable service. It was a source of pride for locals and a must-visit stop for any "big city" businessmen who came to the area to hunt or simply get away from it all.

That's how Kirk Syberg found the place. Several years ago, the restaurateur had dinner at Pear Tree while en route to his family's farm near Macon. He was floored by his experience and eventually got to know Mike Abbadessa, the son of Pear Tree's patriarch. The friends chatted about opening a restaurant together, and when the fire destroyed Pear Tree, their talks became more serious.

Four years later, Syberg and Abbadessa made good on their plans. Though not exactly Pear Tree part two, the restaurant exists as an homage to the old Bevier place — and there is indeed much to celebrate. The Pear Tree's signature onion rings alone might be worth that lengthy wait for a table at its successor. Tender sweet onions are dipped in light-as-air batter with just a whisper of peppery heat. These addictive beauties are offered in two sizes, but you're a fool if you don't get the large.

Crab Rangoon are filled with hunks of succulent crabmeat and wrapped in paper-thin wontons — for once this ubiquitous takeout dish deserves its seafood name. "Twisted Shrimp" offers yet another temptation for filling up before the main course. Similar to a jalapeno popper, the large shellfish are stuffed with jalapeno and cream cheese, then wrapped in bacon and grilled. The bitter char from the grill and spice of the pepper cut through the cheese and pork decadence.

Every entrée at Twisted Tree is served with the restaurant's signature all-you-can-eat salad — a challenge they would have lost had I even one morsel less dignity. A literal throwback to Pear Tree, the crisp salad is served family-style in a chilled metal bowl. Homemade French dressing, feta cheese and the restaurant's signature onion vinaigrette, which tastes like a bloody Mary minus the tomato, arrive at the table in a 1970s-era lazy Susan. Both dressings deserve every bit of the hype they've received over the years, which include being bottled and sold at grocery stores. However, if you are a blue cheese fan like me, make sure to ask for the restaurant's ethereal chunky blue cheese dressing. I didn't think it could get much better than this, but the salad's piece de resistance are the housemade garlic croutons, fried to order and served warm in a mammoth bowl that invites you to snack on them like a side dish in their own right. We devoured every last one.

Like at the old place, Twisted Tree's steaks are aged (dry, wet or a combination of both) for a shockingly long time — on average, 100-plus days. The result is a steak with a deeply concentrated beefy flavor, like beautifully seasoned prime rib. The juicy meat, cooked to a perfect medium rare, is encrusted with salt, pepper and herbs, and drizzled with au jus tableside. I opted for a simple baked potato dressed in butter and chive-sour cream, closed my eyes and relished every bite of this quintessential steakhouse masterpiece.

The restaurant's entrée specialty is its surf and turf: a batter-dipped lobster tail served with either the prime rib or a six-ounce filet. I opted for the latter and was impressed with how much the aging adds depth to what's usually not my favorite cut. The tender meat is cooked on a flat-top, which gives a pleasant crispness to the exterior. The seafood component was equally excellent with its delicate, lightly seasoned breading and tender texture. I can see why people used to drive for hours to eat this dish. 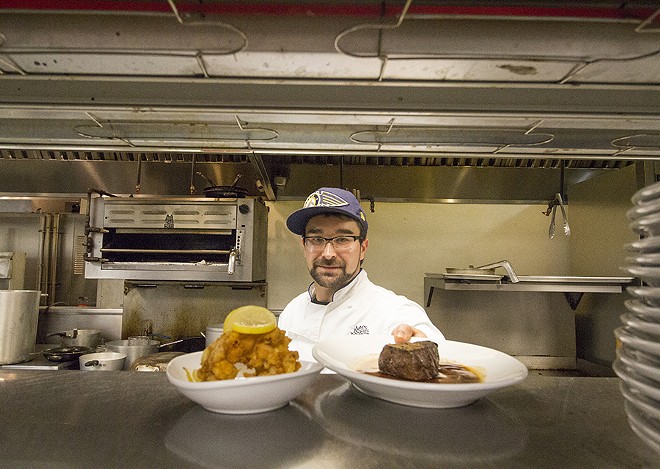 Non-steak items also impressed. Tender chicken breasts are dredged in flour and sautéed with lemon butter for a classic chicken picatta — a straightforward, yet wholly satisfying, dish. Salmon so rich it could be mistaken for a stick of butter is cooked medium rare and glazed with smoky bourbon sauce, and the "Hog Chop" presents as a mammoth piece of pork, glistening with sweet maple syrup reduction. The accompanying crisp apple and sauerkraut slaw is an ideal pairing.

The only dish that didn't thrill was a walleye special. Pairing such an oily fish with creamed Brussels sprouts proved to be too rich. There was an attempt to offset this with a balsamic drizzle, but it wasn't enough to have the desired effect.

Compared to the seemingly endless parade of successes, this misstep was minor, if not completely erased by the dessert selection. A chocolate gooey butter cake gives the satisfaction of eating brownie batter, and pumpkin tiramisu is as delicate as eating a cloud. However, the real treat — at least for people like me, who have aged out of getting invited to weddings — is the wedding cake. The buttery cake, layered with fragrant almond butter cream, brought a tear of joy to my eye faster than even the most earnest exchange of vows.

And here I was, eating it a million miles away from a boring banquet hall in a space that, frankly, I had assumed was going to be nothing more than a boring banquet hall. That's the thing about expectations: They can lead us where we least expect them to — even all the way to Bevier, Missouri. 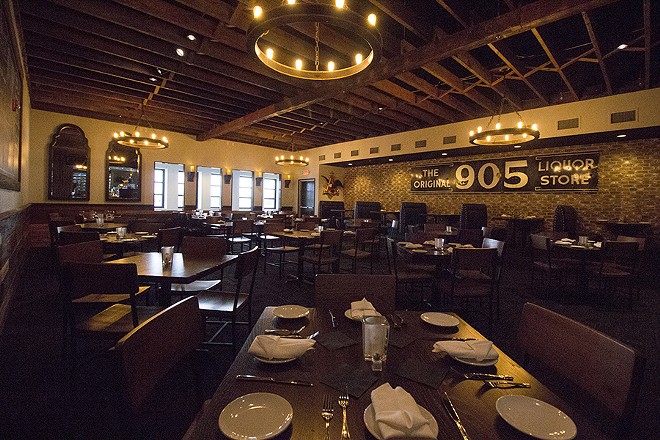 PHOTO BY MABEL SUEN
The main dining area has a dimly lit vibe.
Turn the page for more photos of Twisted Tree Steakhouse.