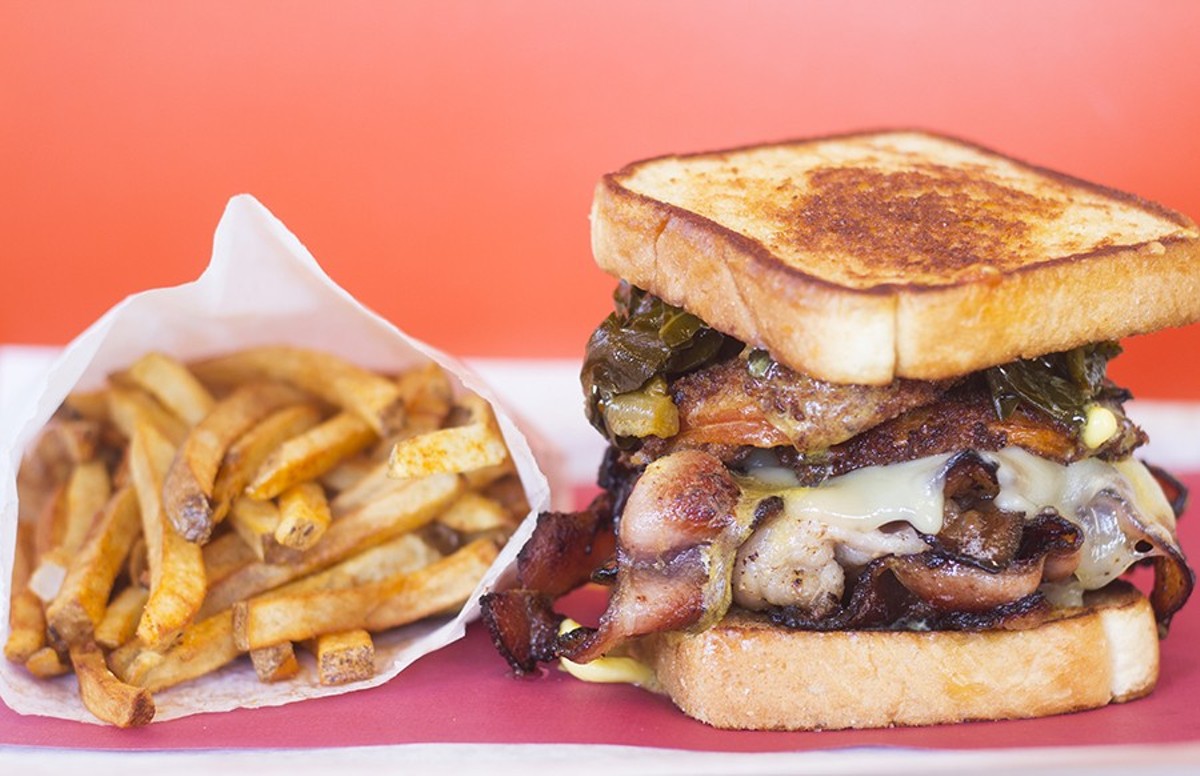 Many moons ago, I took the BulletBoys to Del Taco. For those who lack questionable taste in music, the BulletBoys were a Los Angeles-based hair band known for such rousing standards as "Smooth Up In 'Ya" and a metal version of the O'Jays hit "For the Love of Money." They were the embodiment of raunchy, late '80s hair metal and the debauched lifestyle that accompanied it, a group of architecturally coiffed troubadours whose Aqua Net usage might have single-handedly launched the era of global warming. And there they were, piled into my beat-up '97 Accord in search of some grub after playing the old Hi-Pointe music venue.

I'd gone to see their "Where are they now" style show — mostly for the ironic comedic value, but also because I have a soft spot for bad music — and got to chatting them up afterwards. They were hungry, but the only place I could think of to take them was the old fast food joint around the corner. After we rolled through the drive-through, I witnessed the lead singer, still clad in sweaty neon-colored spandex, devouring a mammoth "Double Del Cheeseburger." It was hard to imagine a more conspicuous display of excess at 1033 McCausland Avenue.

PHOTO BY MABEL SUEN
Hi-Pointe's highlights include "the Abaconing," a double cheeseburger and the "Guac-ness Monster."

It's no surprise that the temple of decadence serving it is the creation of Mike Johnson. At his barbecue concept, Sugarfire Smokehouse, the fine-dining chef-turned-restaurateur and pitmaster is not exactly known for restraint. As Sugarfire's website explains, Johnson's professional purpose is to make your "dirty little food dreams come true," and he's been doing just that since he opened his first-of-many smokehouse in Olivette nearly seven years ago. His barbecue is consistently touted as some of the best in town, but the other secret to his success is a vibrant repertoire of platters and sandwiches (think pimento cheese and bacon) that border on the obscene.

A prolific restaurateur whose résumé includes such successes as Café Mira, Momo's Greek Tavern, Roxanne and Boogaloo, Johnson had been toying around with the idea of another concept. He'd eyed the old Del Taco (Naugles in its prior life) for some time and originally thought of turning the lot into a hot chicken place. Instead, he opted for foodstuffs that were already part of his successful formula at Sugarfire: burgers and sandwiches.

Johnson had the old fast food shack leveled; he replaced it with a modern building made from old shipping containers. The industrial feel was livened by painting the mammoth metal containers in bold primary colors. A cow statue, chalked up to show various cuts of beef, sits on top of the building, and a standalone container turned on its side serves as covered patio seating. 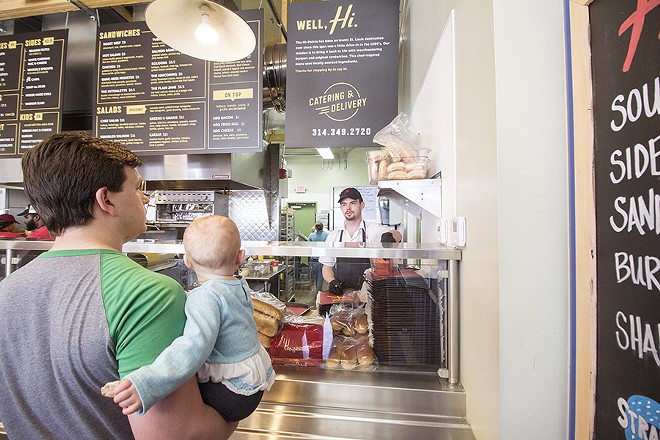 PHOTO BY MABEL SUEN
Lines are long, but they move; somehow, there's always a table.

The space proves larger than you'd imagine from the outside — roughly fifteen tables under vaulted ceilings that open things up — though it is perpetually packed. The set-up is fast-casual, and the line to the order counter will likely extend well out the front door regardless of when you visit. Somehow, though, you rarely wait for a table here, and your food often arrives before you've even grabbed your seat. Even in the chaos, Johnson runs a well-oiled machine.

Hi-Pointe's burgers are its calling card, but Johnson's menu spans several genres' worth of sandwiches that are equally worthwhile. The "Hot Salami" pairs Salume Beddu's gold-standard genoa and soppressata with Provel cheese and a spicy house-made giardiniera that cuts through the fatty meat. It's as wonderful an Italian sub as you'd find on the Hill.

A salmon bánh mì is so refreshing compared to the more decadent offerings, it almost seems like an intermezzo. A filet of beautifully cooked fish is placed atop a crusty baguette and dressed with crunchy pickled vegetables and cilantro. Chile mango aioli adds a hint of sweetness to this wonderful sandwich. 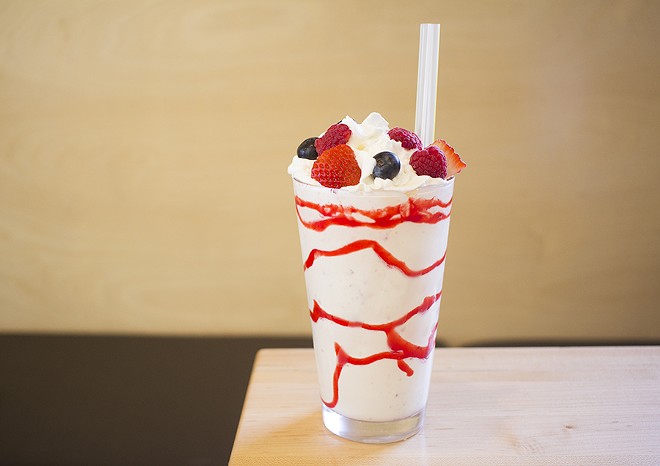 PHOTO BY MABEL SUEN
A boozy shake makes a good meal even better.

As an avocado maven, I was eager to try the "Guacness Monster," an edible love poem to the luscious green fruit. For this vegetarian sandwich, an entire avocado is coated in crushed Funions and deep fried. The avocado party does not stop there, though, as Johnson adds both guacamole and avocado ranch dressing to the sandwich, then garnishes it with sprouts and tomato. The taste is enjoyable, and I'm a sucker for the velvety decadence of fried avocado. However, it's hard to make it work on a sandwich without getting mushy, especially when it's topped with additional dressings. The sprouts and Funions were supposed to provide texture, but the impact was muted. I appreciate the effort to develop a new vegetarian sandwich, but this one needs some work.

Though the restaurant's signature burger is the classic griddled version, Johnson's "Taco Burger" comes close to stealing the spotlight. Ground beef is seasoned with taco seasoning and a melange of smashed Cool Ranch Doritos and Chili Cheese Fritos, then seared on the flat top. American cheese is melted on top and lettuce, tomato avocado ranch and a piquant hot sauce from Mission Taco Joint crown this fun sandwich. As my friend noted, "Wow. This actually tastes like a taco." It's a fun mix of genres that works swimmingly. 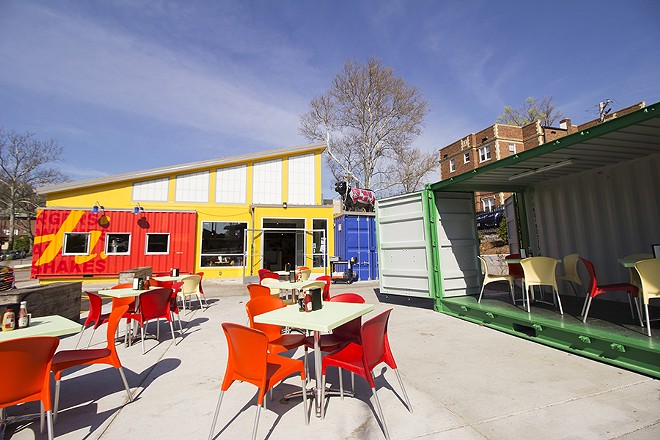 It's hard to walk into Hi-Pointe Drive-In and not order that double burger, but the "Abaconing" might give you pause. It's the kind of sandwich that makes your heart skip a beat — not just because of how much you love it but because, well, eating it probably takes a month off your life. Slice upon slice of succulent Wenneman's bacon is piled onto griddled bread, while bacon fat aioli and green tomatoes coated in bacon bits and deep fried add to the indulgence. Wonderful collard greens that tasted like they've been braised in bourbon and brown sugar may be technically a vegetable, but they feel every bit as decadent as the bacon. It's a glorious celebration of excess.

Sides are a la carte, and though you may think an impossibly hearty sandwich will be more than enough, you must make room for at least one. White cheddar mac & cheese is velvety and luxurious, and jalapeno-flecked vinegar slaw provides a bit of cool yet spicy refreshment. But it's the fries that you simply cannot pass on. Hi-Pointe serves Belgian frites, which have medium thickness, a salt-encrusted, crisp exterior and an interior that's like a mashed potato. They're perfect.

And what better way to wash down all this madness than with an adult milkshake? Hi-Pointe Drive-In doesn't have a pre-set list of alcohol-and-flavor combos — just a selection of classic shakes like butterscotch and strawberry along with shots of liquor. I selected a simple vanilla, which proved impossibly thick and creamy, along with a shot of rum — though does it really matter? It's ice cream and booze. How can you go wrong?

It's a shame Hi-Pointe wasn't open when I was in search of a place to take my carload of hair rockers: I can't think of a better match than the excess they represented and the sheer hedonism on display at the Drive-In. Both are guilty as hell, but man, are they pleasurable. Well, at least the edible one is.