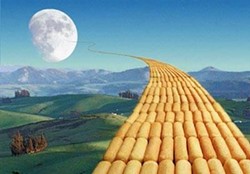 Image Via
To a child, a trip to the Hostess bakery was more alluring than a journey to Oz.

It was with a heavy heart (and a sweet tooth of nostalgia) that I read news yesterday of Hostess Brands closing its St. Louis bakery. Apparently the maker of Wonder bread and Twinkies is in bankruptcy (How is that possible? Are we not still a nation of fat asses?!) and has promised to close any bakery where workers honor a labor strike.

That threat proved real on Monday after St. Louis employees refused to cross the picket line. Some 365 local employees of the factory will lose their jobs. And while that is extremely unfortunate for the workers and their families, the fourth-grader in me cannot help but think of the thousands of St. Louis kids with no connection to the bakery other than this: For generations the Hostess plant was the most kick-ass school field trip ever.

I still vividly recall my trip to the plant on North Broadway. I'd spent my entire elementary school career waiting for that moment. Older kids at the bus stop had gloated about it since I was in kindergarten. And now I had arrived. My classmates and I were finally old enough to -- as a friend put it at the time -- "go to the place where Ding Dongs are made." 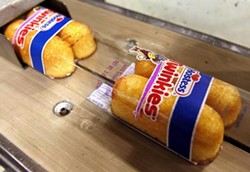 We triumphantly boarded the school bus that morning already giddy about the sugar high we were bound to experience that day. And, spoiler alert, the Hostess plant would not disappoint. But before we got to sample the bakery's confections, we were given hairnets for a tour of the plant floor. To my nine-year-old eyes, the scene was dizzier than anything Lucy would experience in the chocolate factory. Traveling past us streamed thousands of plump and luscious Suzy Q's, raspberry Zingers, sweet and sticky Fruit Pies, spiral-swirled Ding Dongs and creme-filled Cupcakes.

Right then and there every kid in Mrs. Robin's class knew exactly what they wanted to be when they grew up. They wanted to be one of the employees in white uniforms and cotton gloves frantically packaging the sugary delicacies as they whizzed by on the conveyor belts. These people were true professionals.

Though they were not perfect.