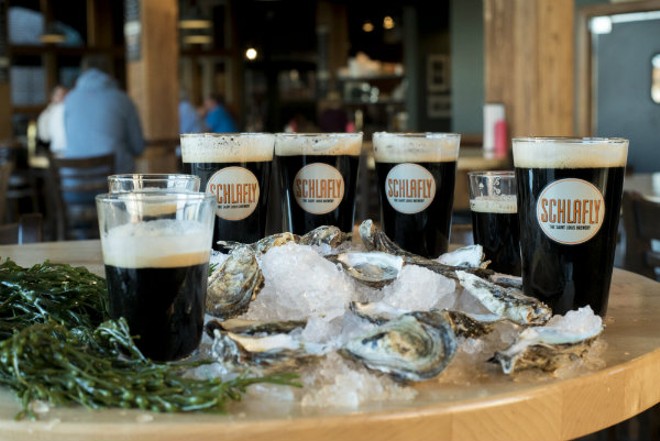 COURTESY SCHLAFLY
A senior executive wrote a newsletter claiming 4 Hands was named for a sex act.

Schlafly Beer is apologizing to 4 Hands Brewing Company after one of its executives slimed the beer maker in an anonymous newsletter.
.
"We were embarrassed to learn of these action and sincerely apologize to 4 Hands Brewing Company," Tom Schlafly, co-founder of Schlafly's parent company, said in a news release. "Such actions are inconsistent with the core values on which we were founded and which have defined Schlafly for 27 years."

The newsletter, called Brew IQ in the Lou, was mailed to bars and restaurants around town and featured a mix of industry news, advice and gossip. In a section called The Buzz, a blind item with the headline #MeToo was a pretty thinly veiled shot at 4 Hands.

"Naming your brewery after a sex act provided at a massage parlor no longer feels as good," the anonymous writer says. "Naming a beer after the lube needed for such service feels even worse. Leave glamorizing a pimp's wad of dollars to the Deuce."

It goes on to say, "The ladies are becoming woke and are starting to ask questions. We'd like to give them a hand, but think the four are proving to be too many."

4 Hands President Kevin Lemp has said the 4 Hands and logo represent the intertwined hands of his family, including his wife and two boys. So not a massage parlor sex act.

The newsletter has sparked a rumbling drama through food and beverage industry as workers suspected an insider had penned the items, including the broadside against 4 Hands. In the past two weeks, rumors swirled that the mudslinging author was St. Louis CEO James Pendergraft, who joined the company in 2015.

On Wednesday, St. Louis Post-Dispatch food writer Ian Froeb broke the news that Pedergraft was resigning, pending the hiring of a successor. Froeb followed up today with another story about Schlafly's apology. The company has declined to elaborate on the reason for Pendergraft's resignation or to say if he was in fact the "senior executive" behind the newsletter.

In a joint statement with 4 Hands, the Saint Louis Brewery, which owns Schlafly acknowledged learning "in recent weeks that a senior executive had caused negative and misleading information to be circulated about 4 Hands Brewing Company through a derogatory paragraph about the company in an anonymous newsletter mailed recently to local bars and restaurants, as well as deceptive online postings and a phone survey to local bars and restaurants in the first half of the year."

The statement says the executive acted alone and has since resigned.

"We are grateful to have this behind us," he said. "We have always run our business with an emphasis on family."

He added, "Given our City Wide charitable program, community engagement, and focus on inclusiveness, the false information that was circulated about us was all the more hurtful, inflammatory and confusing. Nonetheless, we have accepted Schlafly's apology."