Schlafly's Emily Parker Owes Her Career to a Simple Question: 'Why Not?' 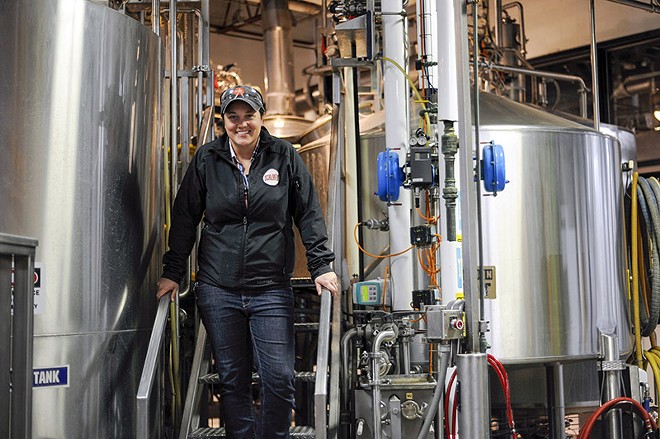 "Food science and technology? Viticulture and brewing science? What's that?" Parker recalls asking her mother. "She told me that it means you basically get to sit around and drink beer and wine all day. I thought, 'Holy cow! Sign me up.'"

A St. Louis native, Parker had been looking at schools in California as a way to follow her family West after her dad was transferred for his job. She had no idea what she wanted to do, but she had been granted a golf scholarship at UC Davis, and it stipulated that she could not go into school without declaring a major. Parker had always enjoyed math and science, so the food science and technology program sparked something in her. "I always thought I would following in my dad's footsteps and be an accountant," Parker says. "Then I saw this program and thought, 'Why not?' It ended up working out for me."

Parker went into the program equally open to wine and beer, but once she started taking classes, she knew that brewing was her passion. "The way I explain it to people is that you can brew beer every day of the year," explains Parker. "With wine, you have to wait for harvest, which makes it so you can only do it once a year."

Parker excelled in her studies and secured two internships — the first at Spoetzl Brewery in Texas and then at Stone Brewing Company in southern California. Though she wasn't sure whether or not she'd return to St. Louis following graduation, an offer from Schlafly enticed her back home. "I had the choice of being in Southern California or here, but they were both internships and I had to pay for housing," says Parker. "I was able to move back here and stay with my grandma, so that made the decision easier."

At Schlafly, Parker worked her way up the ranks and was eventually promoted to her current position as head of brewing operations — a title that might seem glamorous to the uninitiated. "People are always surprised to find out how laborious working in a brewery is," Parker explains. "You sweat your ass off, and it's a lot of work, but having this product, at the end of the day that you get to share with people makes it all worth it."

Parker took a break from prepping for Schlafly's Stout & Oyster Festival to share her thoughts on the St. Louis food and beverage scene, her embarrassing drink-related guilty pleasure, and why she has love in her heart for the Tamale Guy.

What is one thing people don’t know about you that you wish they did?
I ended up at UC Davis because of a golf sponsorship. I was going to follow in my dad’s footsteps and become an accountant — until I found out one of the options I could choose was food science and technology with specialization in either brewing or viniculture! That sounded way better.

If you could have any superpower, what would it be?
I had to think about this quite a bit, and I have come to teleportation. Hey, you want to go to the beach for the weekend? Oh, too far from St. Louis? Boom, teleport.

What is the most positive trend in food, beer, wine or cocktails that you’ve noticed in St. Louis over the past year?
In food, I see more restaurants sourcing local ingredients, which is cool for a whole package, St. Louis-area grown meal. When it comes to craft beer, I see a trend moving towards lagers/pilsners (lighter options), fruited beers and sours.

What is one thing missing or that you’d like to see in the St. Louis food and beverage scene?
Well, good beer sure isn’t missing. In California, there was a chain called Pluto's — fast-casual build-your-own salad type place that had high-quality ingredients. I would love to see something like that here.

Who is your St. Louis food or drink crush?
The Tamale Man. He is at the farmers market on Wednesdays in the Schlafly Bottleworks' parking lot. I can’t resist those tamales.

Who’s the one person to watch right now in the St. Louis food and beverage scene?
Jared Williamson. He is the lead brewer at Schlafly, and I feel lucky to have him on my team. He is extremely talented and has been doing this for a long time. He can create some kickass recipes!

Which ingredient is most representative of your personality?
A mild cheese. I’m pretty laidback and can go with anything.

If someone asked you to describe the current state of St. Louis’ food and beverage climate, what would you say?
St. Louis offers a variety of options. You can find almost everything here, I think.

Name an ingredient never allowed in your brewery.
I would never say never because I don’t want to limit ourselves. In fact, we brewed a beer with an ingredient that Tom Schlafly jokingly said he would fire someone if they used it. Luckily I never got fired (it was peppers).

What is your after-work hangout?
Schlafly Bottleworks' bar and patio.

What’s your edible or quaffable guilty pleasure?
Captain Morgan and Diet Coke — embarrassing, but whatever.

What would be your last meal on earth?
I’m always craving a good burger and lately I’ve been getting my fix at the Dam. The "Dam Burger" and fries are amazing!