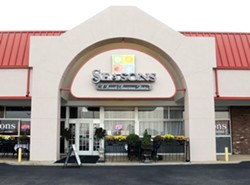 Jennifer Silverberg
Seasons American Cuisine will take over the Seasons St. Louis space in Chesterfield.
Seasons American Cuisine will open for lunch at 79 Forum Center, the shopping center at the northwest corner of Olive Boulevard and Woods Mill Road in Chesterfield, on Monday, November 23. Dinner service will begin on Friday, December 3, according to the restaurant's website.

Joe Bonwich of the Post-Dispatch was the first to notice the new venture in the address that was most recently home to Seasons St. Louis, which lasted from the spring of 2009 until earlier this year. Though the name is roughly the same, the owner is not.

Executive chef Kevin Smith spent the previous twelve years as the executive chef of Greenbriar Hills Country Club in Kirkwood. His experience also includes time at Cardwell's in Clayton when it was still in the hands of Bill Cardwell.