Welcome to Girl Walks into a Bar, a weekly Gut Check feature that spotlights local bars and bartenders. This week Alissa Nelson profiles Shady Jack's Saloon bartender Jennifer Miranda. Below is a Q&A with Miranda, followed by a video of her mixing a margarita.

Jennifer Miranda knows how to wield a shaker.

When a patron at Shady Jack's Saloon orders her signature Washington Apple, she embraces the absurdity of rhythmically rocking an icy steel cylinder. She dances around with it, grimacing comically, holding it like an air guitar for a moment before pouring out a round for everyone sitting at the bar to try.

The snug bar area is lively but never intimidating, an environment that Miranda speaks of with pride. "I think Shady's is evolving, especially with the rockabilly theme, the tattoo shop," she says. "This place was rebuilt from the ground up. There's been a lot of sweat and blood put into this place, and that's why I think Jack puts so much heart into it."

Likewise, Miranda's heart is in the personality-driven world of bartending and the connections she makes with her patrons. She got her start as a cocktail waitress in Washington, then jumped behind the bar once she turned 21. After a few years' hiatus in Las Vegas, she spent her last three years there in a Sin City casino and strip club.

But the family-oriented lifestyle she sought for her two daughters lured her east. Having lived in St. Louis for only a year, Miranda has the laidback ease and charm of a Midwesterner. And she puts a lot of heart into her work, commuting from St. Charles to put her "concoctionist" skills to work.

Click through for a Q&A with Miranda and a video of her making a margarita... 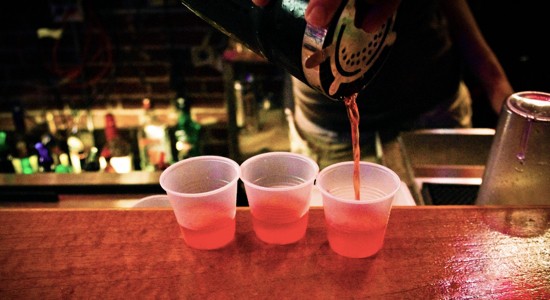 In three words, how would you describe your bartending style? Energetic. Flirty. Attentive.

Favorite drink to drink? I'm a whiskey girl: Crown and Coke with a lemon.

Favorite drink to make? A Washington Apple. It's Crown, apple pucker and cranberry.

Drink you hate making? Lemon Drops. Only because I open my own bottles and I get cuts in my fingers -- or from shoving the bottles into the beer well -- and you're squeezing four or five lemons in there, so it'll burn a little bit.

What makes you ignore a customer at the bar? Rudeness. I cannot stand it. The worst is if we're slammed and there's only two bartenders working and there's hundreds of people out there waiting for a drink. There's always that one person who acts like there's nobody else there, like they're the only customer who wants a drink. I try to at least let every person know, "I see you, just give me a minute."

Can you spot trouble as soon as it walks in the door? I want to say yes, but I try not to judge. For instance, a couple of weeks ago we had an older guy come in, and he seemed to have it together. He said, "If I want to drink but I don't want to ride my bike, can I leave my bike here?" And I said of course, because if you leave your keys with us then you don't hurt yourself or somebody else. And he gave me his keys before he got smashed, and I put them in the register, and before you knew it he just became somebody else, like Jekyll and Hyde. It took me by surprise. I would have never seen that coming. But then the MCs will come in after riding all day, and they're a little rougher, but they're always the sweetest people.

Best/worst song on the jukebox? I'm pretty diverse when it comes to my music. I don't want to say that there's one that I like least.

Worst/best thing you've ever seen happen in your bar? The best thing I've seen is a guy get up on a pole and work that pole like there was no other. The worst is probably a fight that broke out, but the great thing about Shady's is that there's always eyes watching, and [fights] don't last long or escalate.

How do you keep yourself occupied on a slow night? It can be hard sometimes. It can be a good chance to get to know your repeat customers and tell them a little about yourself. I think that once you do that, it opens up a better relationship with your customers.

Who would you most like to have a drink with? Stevie Ray Vaughn. Or Oprah.

Where are you most likely to be found when you're not in this bar? Home.

Worst pickup line you've ever heard? Oh gosh. I hear so many. "You must be from Heaven, because God lost one of his angels." I can't even repeat it right!

Most unusual liquor you've ever seen? Jekyll and Hyde. It's two different bottles, and you can mix them together in drinks.

If you could start a band, what kind of band would you start? Probably an all-girl blues-rock thing. There could maybe be one guy, on bass.

Best/worst drinking holiday? For my customers, Christmas is hard. I think they get lonely. New Year's would probably be the best, the biggest celebration. The stress of Christmas and the holidays is off of them and they can just look forward.

Drunk food of choice? Fast food. Any, I don't care.

My bar is the only bar in St. Louis where... Everyone is welcome, always.

If you know a local bartender who's worthy of a profile, e-mail [email protected]!