Mitchell Backman, the new Tony's owner, outside his Shrewsbury home
Mitchell Backman thought the Groupon deal in his email inbox must be too good to be true: a $50,000 gift certificate to the crown jewel of St. Louis restaurants, Tony's (410 Market Street; 314-231-4740), for only $25.
It wasn't.
Now the 45-year-old Shrewsbury resident, a postal clerk by profession and the single father of three, can add restaurateur to his résumé.
"I thought they'd use some kind of legalese to get out of the deal," Backman tells Gut Check. "But they just signed over the lease and handed me the keys." 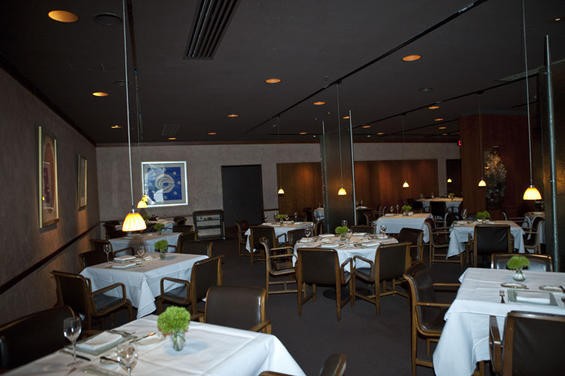 Laura Miller
Backman foresees no immediate changes to the Tony's experience.
Vincent J. Bommarito, Tony's now-former owner, says the Groupon deal was a fortuitous mistake: "It seems like every day someone is calling me. The Post. Jerry Berger. You guys. 'Are you staying downtown? Are you moving to the Cheshire Inn?'
"When [Backman] came in with the coupon, I thought to myself, 'You know what? To hell with it. It's time for a new adventure.'"
Bommarito confirms that the Groupon deal was supposed to offer diners a $100 gift certificate for $45. A Groupon spokesperson declined to speculate on what might have caused the error. However, the company later released the following written statement:

Ever since God created the duck-billed platypus when all He meant to do was give Adam and Eve a new home-entertainment system, mistakes have been a part of human history.
Embrace the inevitability of human folly by accepting our sincere apologies (an inestimable value) for the recent error involving Tony's restaurant in St. Louis.

Backman doesn't foresee any immediate changes to Tony's staff or menu. In the long run, though, he hopes to bring his perspective as the parent of three pre-teen children to the venerable restaurant.
"I mean, it's not very kid friendly," says Backman. "Would it kill them to put some, I don't know, fried cheese sticks on the menu?"