Side Dish: Phillip Lockett of Frazer's and Takashima Records 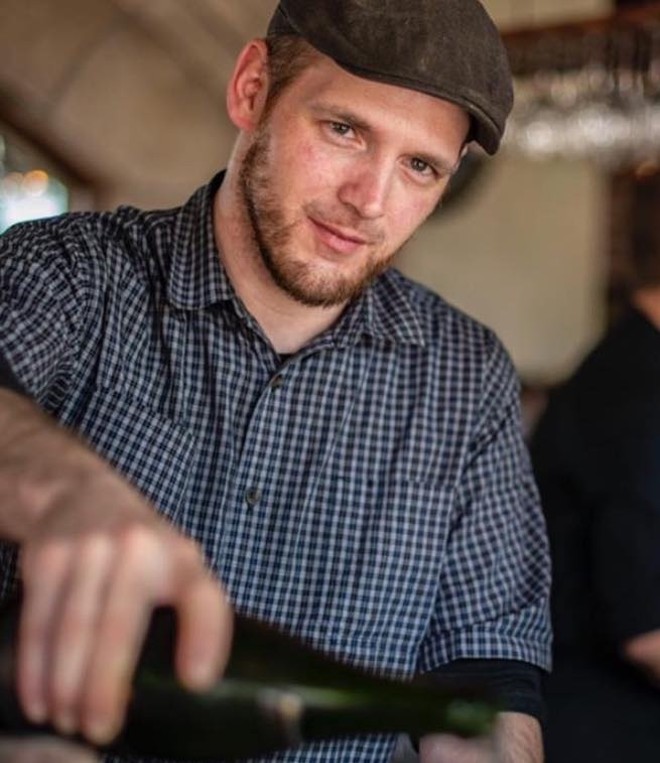 ED ALLER
Phil Lockett is getting through the current crisis by focusing on others.


Phillip Lockett knew things were going to get bad when he started hearing from his music colleagues who were out on tour in Europe. Tours were getting cancelled left and right, a friend got stuck in Italy, and social media posts told stories of curfews and deserted streets. He knew it was just a matter of time before the same would happen here.

"We knew it was coming, but it still took us by surprise," Lockett says. "When we made the decision to close Takashima Records and pretty much the whole family group of restaurants, it was cool because it showed that the service industry was trying to jump ahead of this and be responsible and encourage people to stay home — but still, once it happens to you it's like, 'Oh shit.'"

Lockett, who divides his time behind the bars at Frazer's (1811 Pestalozzi Street, 314-773-8646) and the brand-new Takashima Records (4095 Chouteau Avenue, 314-571-9133), has been out of work since both establishments decided to fully shutter in the face of the COVID-19 pandemic. However, he is not focused on his own situation and is instead concerned about his fellow hospitality industry professionals who might not have a strong support network and the small businesses, like his beloved Shameless Grounds, that are fighting for their survival. Part of the reason for his perspective, he explains, has to do with his vast touring experience with bands like the Tony Danza Tapdance Extravaganza and Emmure — a lifestyle that is way less glamorous than non musicians might think.

"I feel fortunate to have that experience touring," Lockett says. "On tour, you have to ration food and money, and you're stuck in one place and can't go anywhere or do anything. When that's ingrained in you, the reality of how to live like this comes naturally, but not everyone has that experience, so I'm thinking about how I can help. I know what level of survival I can tolerate; I'll tear the shirt off my back and give it to you if you need it."

One way Lockett is helping his fellow musicians and service industry colleagues is by drawing attention to the many fundraisers that are assisting those in need during this time. He's particularly moved by the Nomad Fundraiser, set up by his touring colleague, Frank Fanelli, that is providing assistance to musicians who have lost their jobs as tours have been cancelled and venues shuttered. He's also encouraging people to support funds like the Gateway Resilience Fund, the United States Bartenders Guild's Bartender Emergency Assistance Program and Good for the Grove, all of which have been set up to assist hospitality professionals as they navigate an uncertain future. He urges everyone to check in on others, noting that these difficult times can be a trigger for those who may already be dealing with mental health issues.

"I'm trying not to focus on the bad but on what we are doing right now to take care of others," Lockett says. "It's affirming to be a part of this scene because everyone is doing what they can do to help. Seeing how we are all coming together to take care of each other is giving me hope."

Lockett took a moment to share his thoughts on the state of the St. Louis hospitality industry, navigating the new "normal," and what is giving him hope in the face of adversity.

As a hospitality professional, what do people need to know about what you are going through?
That's a tough one to answer. All my life, I’ve known people that were laid off, or otherwise, forced to stop their chosen profession — where their only option was getting on unemployment while they found a new job. I’d much prefer if this situation was that simple. Unfortunately, this situation is bigger, broader and so much worse. I don’t know if there is anything that I’m going through that people need to know. I’m most likely dealing with the same as they are —  stress, worry, fear — though, not so much about myself necessarily but my community. Those demographics who are at a higher risk of dying if they catch this thing. The elderly, those with weak immune systems, hospital and aid workers. First responders. ‘Essential’ workers. All my friends and family in the music and touring industry who are in the exact same situation as us in the service industry. My friends and fellow service industry workers. Most of us live paycheck to paycheck. Those small and independent business owners who can’t file for unemployment and, in all likelihood, may never open again who are losing everything. Earlier today, I was talking with my neighbor, who’s a rep for a brewery (let’s just say it’s very massive and very well known). They estimate that St. Louis will lose at least thirty percent of its bars and restaurants by the time it's safe to reopen. He’s anticipating getting laid off soon. I guess what I’m going through is trying to wrap my head around the ripple effect of all of it and how I can, effectively, help and support.

What do you miss most about your job?
The work flow — that sensation you feel when you’re slammed, but you and your crew are executing perfectly, like clockwork. Also, I miss the interaction with patrons and introducing them to something new, catching up with regulars and knowing exactly what they want, how they want it, without them saying a word. The sense of purpose.

What is one thing you make sure you do every day to maintain a sense of normalcy?
Walk around my apartment as much as I would behind a bar, shake a couple of tins with nothing but ice, stir ice around in a mixing glass ... I’m joking! Honestly, none of this is normal. My normal is I wake up, work, clock out, decompress and socialize at a local bar for a bit, go home, sleep, repeat. Any sense of normalcy, or the maintenance thereof, has gone out the window. Though, with this abundance of free time on my hands, I have been reading a lot more. I’ve also shifted back into creating and working on music (I’ll need to get a Patreon account, right?). I’ve been finally working on projects around the apartment that I’ve been putting off. I suppose that’s what I do to maintain: find a purpose for myself.

What have you been stress-eating/drinking lately?
Whiskey. A Lot of whiskey. When news hit that we were closing Takashima Records, I went home that Sunday night, messaged Terry at Frazer’s, and spent all night (and most of the morning) texting and communicating with other industry friends about what we can/could/should do next. I had a bottle of whiskey next to me the entire time. Not proud of it, but not ashamed either.

What are the three things you’ve made sure you don’t want to run out of, other than toilet paper?
Food, booze and beer and money. I'm more worried about money than anything else — more worried about my friends and loved ones in that respect.
You have to be quarantined with three people. Who would you pick?
There’s far too many to choose from, though, I am lucky to have two of the most chill roommates ever, Josh and Pyatt. We’ve known each other and toured with each other since a lifetime ago. With our experience, this kinda just seems like another tour: We can’t go anywhere, are rationing and stuck with each other doing nothing. It’s surprisingly similar.

Once COVID-19 is no longer a threat, and people are allowed to go back out and about, what’s the first thing you’ll do?
Go back to work, doing what I do.

What do you think the biggest change to the hospitality industry will be once people are allowed to return to normal activity levels?
Perspective. This whole ordeal, so far, has shed light on how vulnerable the industry is in such a situation and how essential it is for local commerce, not just here, but across the country. I don’t know if it will happen, but I would like to see measures ALREADY set in place and well-funded that would guarantee emergency assistance to small, independent businesses and their employees in the event that an emergency of this magnitude ever happens again. I’m very aware of what programs are in place and what insurance is out there that are assisting however they can, though, I suspect that none of those were prepared for a scenario this big. It's almost like handing out Band-Aids for a shotgun wound when it’s really an amputation. So, maybe that will change. *holds breath.* Also, sanitation protocols. I think there will be two types of people: those patrons that will go back to their normal routines and those that will be very skeptical about even going out. Much like how at the start of this, bars and restaurants having to visibly show patrons how clean we already are and taking extra precautions on top of that, I believe we’ll have to continue making that very visible for all to feel, somewhat, comfortable again.

What is one thing that gives you hope during this crisis?
Friends, family, community (both professional and literal). I’m always awestruck by the lengths individuals will go to help and support their neighborhood, community and city when devastation happens, especially in the service industry. I don’t know, maybe I have more optimism than hope. The hope I do have is that we all get through this and survive long enough to once again gather around the table or warm up to the bar and share a round or two. Until then, it’s virtual bars and Facetime shots. Cheers!