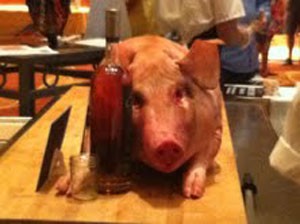 Last night marked the first time that the traveling porcine pleasure palace known as Cochon555 oinked its way into St. Louis. Founded by man-on-a-mission Brady Lowe, Cochon is a celebration of the heritage breed pig, local farmers, humane and sustainable agriculture, and the potential of barbecue in local restaurants. The event travels to Memphis for the next leg of the 2013 tour.

Nashan's Korean barbecue-themed plate beat out equally ambitious offerings from St. Louis' culinary intelligentsia, including Kevin Willman of Farmhaus, Matt Accarrino of SPQR, Gerard Craft of Craft Restaurants, Ltd., and Fabrizio Schenardi of Cielo for a year's worth of bragging rights. Each chef was tasked with creating four meat dishes and two sides that not only represented their creative genius in utilizing a whole pig, but also showcased the potential for heritage barbecue in fine dining restaurants. Participants were judged on flavor, utilization, technique, side dishes and "pigginess," with Nashan earning the 2013 crown (and a $3,000 CVap machine).

Nashan's winning platter included a Korean barbecue-glazed sweet and sticky riblet with toasted sesame seeds, pulled pork wrapped in a sticky bun, and various kimchi. Other notable entries included Willmann's glorious pork consomme (by the end of the night, guests were doing shooters of the delicious liquid) and a ginger "bloodercream" cookie concocted by the brazen minds behind Craft Ltd.'s pastry team. The cream filling, made with pig's blood, shocked the crowd at first, but quickly became a fan favorite as a result of its pleasing ginger bite.

Other highlights of the evening included a pop-up butcher shop that featured a whole pig butchering demonstration by Chris Bolyard of Sidney Street Café (word has it that Bolyard may be venturing out to start his own butcher shop -- stay tuned).

And what goes better with barbecue than bourbon? In honor of the U.S. Senate's declaration of September as National Bourbon Month, the event crossed over into downright Bacchanalianism as some of St. Louis's finest mixologists served up everything from perfect Manhattans to rye whiskey sours.