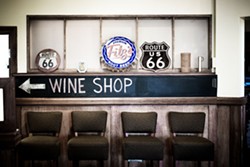 On March 29, the Illinois Senate voted 48-6 in favor of proposed "sip and spit" legislation, which would allow culinary students under age 21 to legally taste alcoholic beverages in a classroom setting, provided they spit out the drink after tasting. The legislation still has to make its way through the Illinois House, but based on its near landslide approval in the Senate, support seems high. If passed, the bill would allow underage culinary students to sip and spit alcohol under the supervision of an instructor, with liquid volumes amounting to less than a shot.

Naturally, upon hearing this news Gut Check was curious to find out what St. Louis culinary schools think of the Illinois bill. Shouldn't this be something that Missouri culinary students are allowed to do as well? Turns out they already can, and have been able to for awhile. Ellen Piazza, associate professor and coordinator of culinary arts at Forest Park Community College, informed Gut Check that under Missouri law (Chapter 311-325), students 18-years-old and older who attend accredited colleges and universities in Missouri can already sip and spit alcoholic drinks in specified culinary classes.

"Here at the college, students under the age of 21, may taste, under supervision, but not imbibe, in alcohol in specific courses," says Piazza.

The law specifies that students must be 18-years-old or older and enrolled in a culinary program at an accredited college or university, so we assumed it was a non-issue for underage Missouri culinary students. That was until we spoke with Amy Grosz, member of the American Culinary Federation Chefs de Cuisine Association of St. Louis and chef instructor at the Culinary Institute of St. Louis at Hickey College.

When we asked Grosz if she had heard of Illinois' "sip and spit" legislation, she confirmed that she had, and that it is something that she and many other Hickey College professors have discussed. Grosz teaches a beverage class at Hickey College, and she described the Illinois law as positive step for culinary students at Hickey.

"We would love it," she says. "Most of our students are underage...[and this law] would enhance their experience."

She explained that as of right now, professors at Hickey College are forced to use non-alcoholic wines to teach students 20-years-old and younger about the color, smell, and taste of wines to pair with certain foods. If you've ever tried a non-alcoholic wine, you know how much these chefs-to-be are missing out on.

In addition to only taste testing virgin vinos, underage culinary students at Hickey College also miss out on winery and alcohol-based field trips, such as the school's annual jaunt to Augusta Winery, where students have the opportunity to learn more about grape and wine production.

Grosz said that she and the Hickey College culinary school staff hope that Missouri will pass a similar law so that her students can enjoy a more well-rounded experience while in school to further the experience for both student and teacher. Upon learning of Missouri's current liquor laws for underage culinary students, Gut Check attempted to reach Grosz for further comment but was was informed that she and the Hickey College staff were currently on spring break.