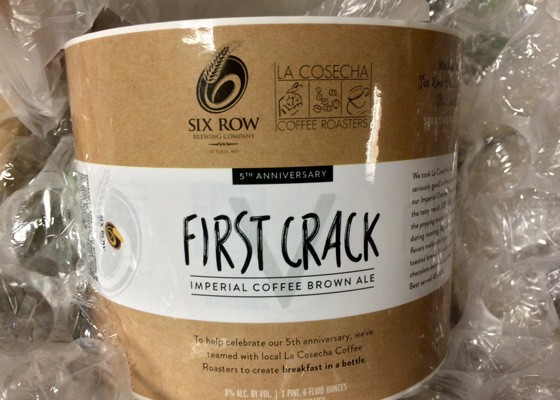 Coffee collaborations seem to be the next big thing in St. Louis' craft-beer scene. Like chocolate, java is usually made into a stout -- a dark, high-ABV beer. Six Row Brewing (3690 Forest Park Avenue) decided to go another route after Maplewood's La Cosecha Coffee Roasters contacted them on Twitter.

"In our case, we didn't want to just do 'another stout,'" Six Row brewmaster Evan Hiatt says. "So that's why we decided to go with something different than what we had heard before -- an Imperial coffee brown ale."

"The La Cosecha folks happened to message us on Twitter about two months ago asking if we had interest in working with them, which of course we wanted to! [We] always love working with other local businesses, and coffee and beer is a natural fit," Hiatt says in an email. "A relationship developed: They toured our brewery, we sampled coffee at their shop (got two different kinds of buzzed), and then we brewed the actual beer."

Six Row is hosting a special release today, December 4, almost five years to the day since it first opened its doors in 2009. First Crack is also available around town in 22-ounce bomber bottles this month.

"It's [five years] gone by incredibly fast and has been a lot of fun, but like any small business, comes with many challenges. We have seen the St. Louis craft-beer movement really bloom since we opened our doors and are very proud to be a part of the scene," Hiatt says.

La Cosecha opened in July 2013 inside Maplewood's Great Harvest Cafe, though it had previously provided coffee for Sarah's Cake Stop and Global Foods Market, among others. First Crack is La Cosecha's first beer collaboration. As for Six Row, the brewers hope to grow in the next five years.

"[It] will not only increase our footprint but will give us a chance to release some really fun things, i.e. more barrel aged beers, specialty releases (like First Crack) -- maybe even throw a festival," Hiatt says. "Who knows. There is a lot of opportunity out there, and we look forward to seeing it."