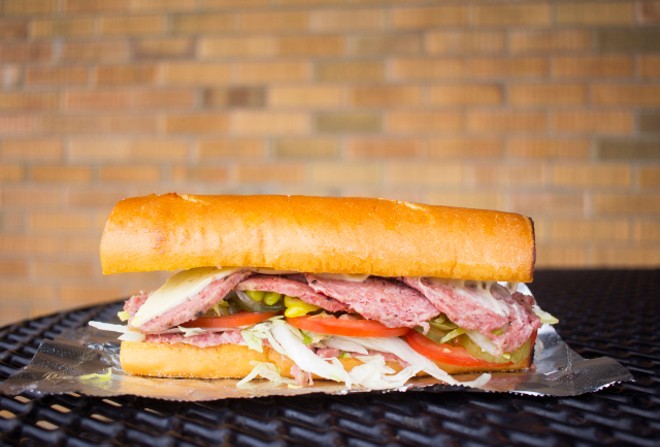 MABEL SUEN
Gioia’s Deli made the list for its famous hot salami sammie.

We're super lucky to have a wealth of awesome and diverse locally-made sandwiches in St. Louis — and it seems like folks across the country are finally taking notice.

Food Network kicked off 2020 strongly with its list of the Best Sandwiches in America, with six of the 99 sammies featured from St. Louis-area businesses. "Here are the country's most-iconic sandwiches, and the one place you should try each," the list begins.

We know how much our Riverfront Times readers love slideshows, so in service to you, dear Facebook commenters, we clicked through all 99 slides for you to share which local spots took top honors.

First up is the hot salami sandwich from Gioia’s Deli (multiple locations including 1934 Macklind Avenue, 314-776-9410), which the story says is "hot in more ways than one." Damn straight, Food Network. The sandwich is praised for its warm Italian bread, Provel and housemade salame de testa.
"The slightly earthy and peppery meat is sliced to order in thick rounds, served on hot Italian bread (get the garlic-cheese bread) dressed with choice of toppings like lettuce, tomato and spicy giardiniera," the writer concludes.

Next up is the smoked trout salad sandwich from Union Loafers (1629 Tower Grove Avenue, 314-833-6111). "One might think seafood is limited in states that don’t have direct access to the sea, but wherever there’s a river or a lake in the United States, there tends to be trout," Food Network starts out the review. "One of those mainstays is the trout salad sandwich. At Union Loafers Cafe [sic] in St. Louis, the sandwich-obsessed chefs smoke the fish over apple wood and mix the meat up with housemade mayo, lemon, capers and fennel."

The list promotes a few exceptional breakfast sammies, too, including the croissant breakfast sandwich from Nathaniel Reid Bakery (11243 Manchester Road, Kirkwood; 314-858-1019). "It's been hailed as one of the best breakfast sandwiches in the food-loving St. Louis area," the story states. "Reid layers farm-fresh soft-scrambled eggs (which have an airy, quiche-like consistency) with ham, smoked bacon and Havarti inside one of the bakery’s renowned croissants that take four whole days to make. Melted cheese and chives add another creamy and vibrant touch."

Reflecting on Schottzie’s iconic menu item, Food Network writes: "The fried brain sandwich doesn’t just exist, it lures people from all around the Midwest. People drive from hours away to try the formerly common Midwestern specialty at Schottzie’s, one of the few remaining restaurants that still serves the now-endangered sandwich. Like most fried foods, this patty is crispy on the outside, soft in the middle and it tastes far better than one would imagine. Brain, generally hailing from hogs, is dipped in an egg wash, then a flour mix sprinkled with spices, formed into patties and stuck in the freezer. Each one of the 20 to 25 orders sold at Schottzie’s per week is thrown back in the deep fryer when ordered and sandwiched between rye bread with mustard and pickles served on the side."

And last but certainly not least, locally adored restaurant Mai Lee is featured for its St. Paul sammie. Food Network first gives some history on the local classic before delving into what makes the version at Mai Lee a must-try dish.

"This St. Louis-area special was said to have been created by a Chinese-American chef hailing from Minnesota, hence the confusing title," the story begins. "A mix of an egg foo young patty (egg, onion and bean sprouts), lettuce, tomato, onion and pickles between two slices of white bread, this creative sandwich spread throughout the Gateway City in the 1940s by Chinese restaurateurs seeking to attract customers unfamiliar with their cuisine. You can still try it at Mai Lee. The popular Vietnamese and Chinese restaurant offers about a half-dozen variations of the regional favorite. The one to get is the Special St. Paul, featuring all of the standard ingredients as well as a meaty mix of pork, beef, chicken, ham and shrimp, brightened with pickled onions, cucumber and lettuce."

Did Food Network forget your favorite local sammie? Let us know in the comments.