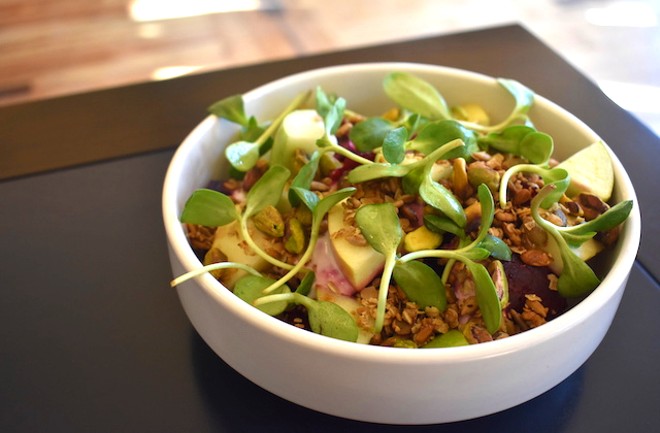 Just in time for the holiday season, a beloved local restaurant and market has been revived with a refreshed concept in a redesigned space. On Thursday, November 14, Winslow's Table (7213 Delmar Boulevard, University City; 314-725-7559) will open its doors in University City at 8 a.m.

Located in the former Winslow's Home space, the renamed and reimagined concept comes from Michael and Tara Gallina, the husband-and-wife team behind acclaimed restaurant Vicia (4260 Forest Park Avenue, 314-553-9239). The restaurant power couple first announced the purchase of the space in August under their Rooster and the Hen Hospitality Group.

"It's really cool to have a space that can be so many different things," Tara says. "To be a spot where you can pop in, grab something really delicious to fuel your day or sit down with friends and family for a great meal and being able to bring your kids. It's more casual, less fuss, but still top-level service. Switching over to a full-service model will hopefully allow us to make that experience feel a little more seamless for folks and bring the spirit of Vicia in a much more casual setting."

"That's been my favorite thing," Michael adds. "I think Vicia is a lot like that, where you could bring your family or your kids and there's an experience there for you, but it's just never going to be looked at like that kind of restaurant. So I'm excited that we have another platform to share that."

Winslow's Table will open for breakfast and lunch service only to start, with plans to add dinner service by the end of 2019. The restaurant will offer both table service in the dining room and a robust carryout menu, including an assortment of pastries and desserts and grab-and-go options such as pesto, soups and grain salads.

When the restaurant soon gets its liquor license, you can expect to find a range of approachable and affordable wines and local craft beers. For now, Winslow's Table is serving a selection of nonalcoholic cocktails developed by Vicia bar manager Phil Ingram Weaver as well as a robust coffee program that aims to give the neighborhood a new destination for a cup of joe. 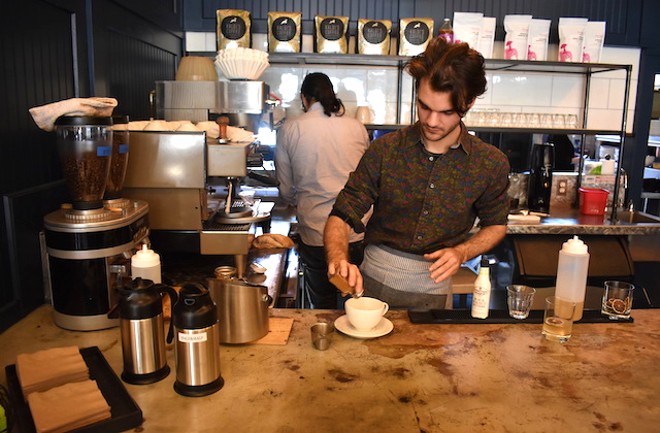 Liz Miller
The new coffee program at Winslow's Table aims to give the neighborhood a new coffee destination.

"The coffee program was another big investment that we made, both in upgrading the equipment and establishing a relationship with Kaldi's [Coffee]," Tara says. "We have some great seasonal coffees mixed with their classics and then great fresh-brewed tea for both dining in and the University City community to have a great coffee shop."

Longtime Vicia sous chef Alec Schingel will be leading the kitchen at Winslow's Table, serving a menu inspired by the seasons and combining the casual atmosphere of Winslow's Home with the seasonal fare that's made Vicia famous. Dishes will range from pastries and breakfast tacos for breakfast and brunch to soups, salads and sandwiches for lunch. A handful of dishes are available as "half and half" options, allowing guests to pick two items as half portions for just $12.

Breakfast service begins at 8 a.m. and lunch service starts at 11 a.m., but both menus will be served until closing time at 3 p.m. For breakfast, choose from plates such as the Winslow's Pancakes with preserved blueberries, maple syrup and whipped butter or the buttermilk biscuit sandwich with a fried egg, applewood smoked ham, Cheddar and apple mustard.

On the lunch menu, sandwiches include a braised brisket sammie with provolone, horseradish, Dijon and pickled banana peppers with a side of chips or a green salad and a grilled cheese with Cheddar, Gruyere and tomato sofrito served with your choice of chips or a green salad. Other lunchtime menu items include a beet salad with Fuji apple, yogurt vinaigrette, pistachios, toasted seeds and sunflower shoots, and shakshuka made with a base of tomato and pepper stew, poached eggs, harissa, feta, marinated cucumbers and herbs served with sourdough flatbread.

"I'm really excited about large-format dishes like the shakshuka," Michael says. "I think of it like how [Tara and I] cook together every Sunday, which is our day off together, and sometimes its with flavors and things I couldn't execute with two or three cooks at Vicia [for lunch]. We do a smaller format with our pick two or three [lunch menu at Vicia], so I'm excited to have a little more fun here and go a little outside of my comfort zone." 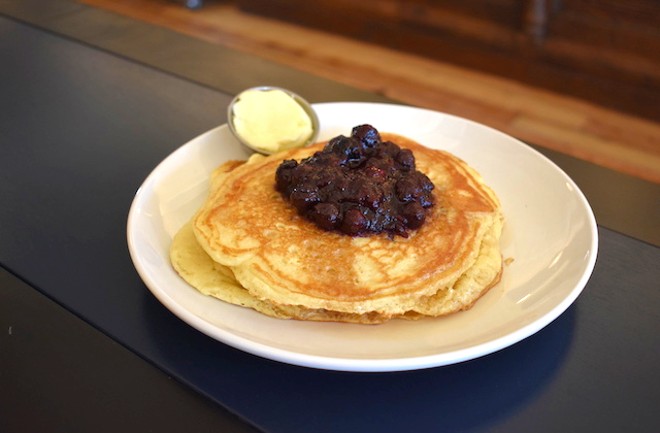 To complement the breakfast and lunch menus, Winslow's Table is also serving four flavors of fresh ice cream from Clementine's Naughty & Nice Creamery, with a dedicated "dip station" set aside for the frozen treats. When dinner service is added in early or mid-December, the Gallinas plan to introduce an expanded selection of grab-and-go meals as well.

As at Vicia, Winslow's Table will prioritize sourcing fresh ingredients and produce from local farms, including Winslow's Farm, owned by former Winslow's Home owner Ann Sheehan Lipton. In fact, that's how the Gallinas first met Sheehan Lipton — as clients buying in her produce at Vicia.

"Utilizing food grown close to home has benefits beyond the consumer, the environment and the local farm economy and has always been a part of our mission," Sheehan Lipton shared in a release in August. "In handing the reins to Michael and Tara, I feel comfortable in their ability to build on the hard work and dedication of so many amazing people who made us better and left their mark over the years.” 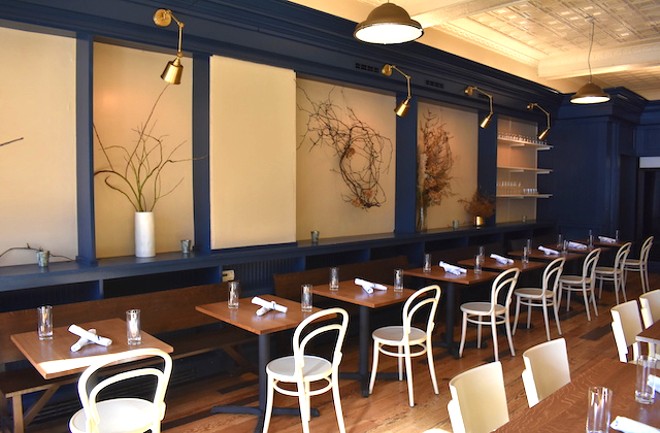 Liz Miller
The dining room at Winslow's Table was remodeled by Sasha Malinich of R/5 and Casco Architects.

The redesign of the space was overseen by Sasha Malinich of R/5 and Casco Architects and includes new tables from Martin Goebel of Martin Goebel Design. The striking new space features a navy, gold and white color palette that retains the coziness of the former dining room while brightening up and modernizing it.

Fans of Winslow's Home will be happy to find an updated retail selection and market inside Winslow's Table. When doors open on Thursday, look for locally made products from Big Heart Tea Co., Kaldi's Coffee, Marcoot Jersey Creamery, Clementine's Naughty & Nice Creamery, Brian Severson Farms, Rolling Lawns Farm and many more. Retail products are divvied up on shelves across the space, including coolers with cheese, ice cream and dairy products. Winslow's Table will also sell fresh baked bread; Michael says that 80 percent of the bread featured on the current menu is being made in-house.

"[The market is] going to allow us to show off more farmers and artisans with being able to sell some of these great retail products and our team can grow our bakery program and show off breads and all these beautiful pastries," Tara says. "There's just more room for that here, which is really cool. This is just the starting place and we'll figure out what people want."

In addition to refreshing the dining room, Winslow's Table will make smart use of the building's existing private event space, which will function as both an event space and a more formal dining experience reflective of Vicia.

For now, however, the Gallinas are just excited to get the doors open and start sharing what they've built at Winslow’s Table with the community.

"We've only been here a short while, but I think this neighborhood has a lot of very passionate and committed people, and that's not an experience we've had at Vicia because it's not in a neighborhood in that way," Tara says. "I'm excited to have those regulars who you get to know because they're here four times a week, hopefully, and you get to know their life story."

Winslow's Table will be open Tuesday through Sunday for breakfast and lunch from 8 a.m. to 3 p.m. Scroll down for additional food and interior photos. 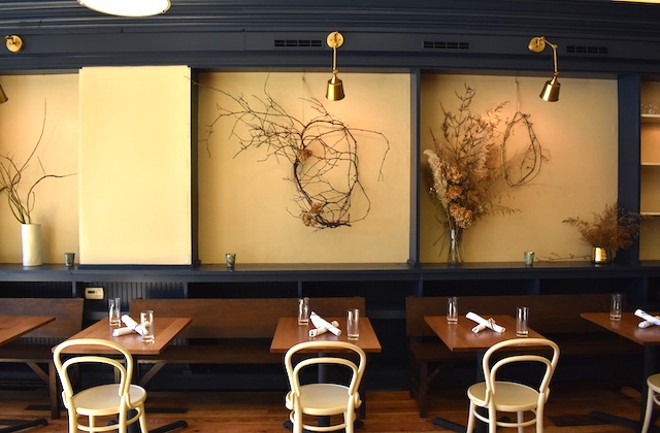 Liz Miller
Another view of the remodeled dining room at Winslow's Table. 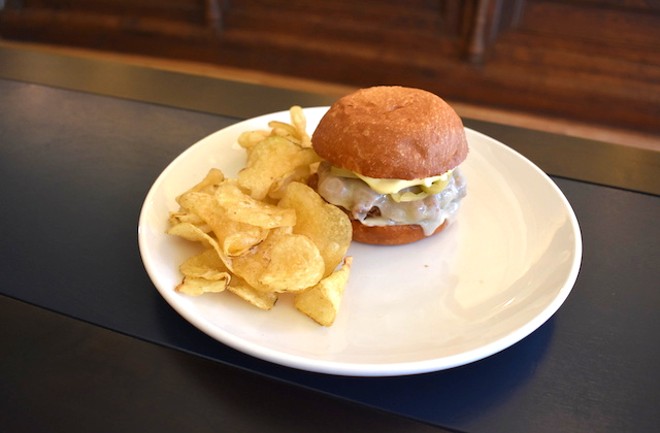 Liz Miller
The braised brisket sandwich with provolone, horseradish, Dijon and pickled banana peppers with a side of chips. 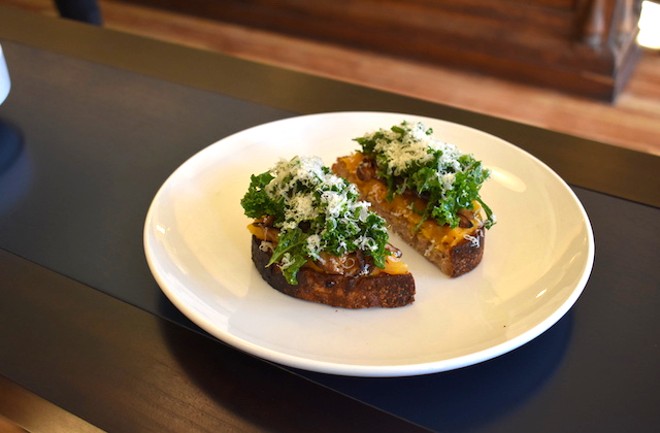 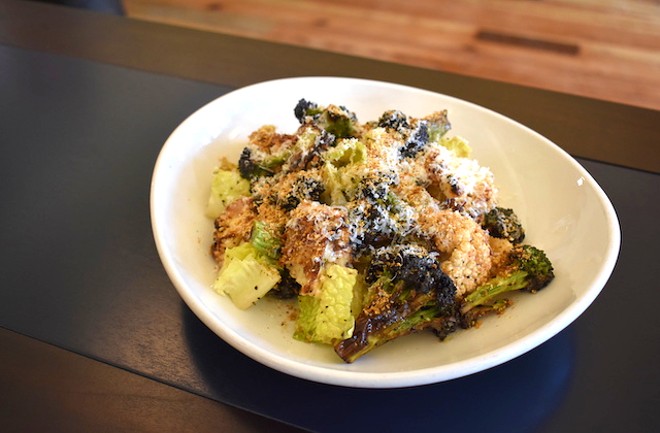 Liz Miller
Shakshuka made with a base of tomato and pepper stew, poached eggs, harissa, feta, marinated cucumbers and herbs served with sourdough flatbread. 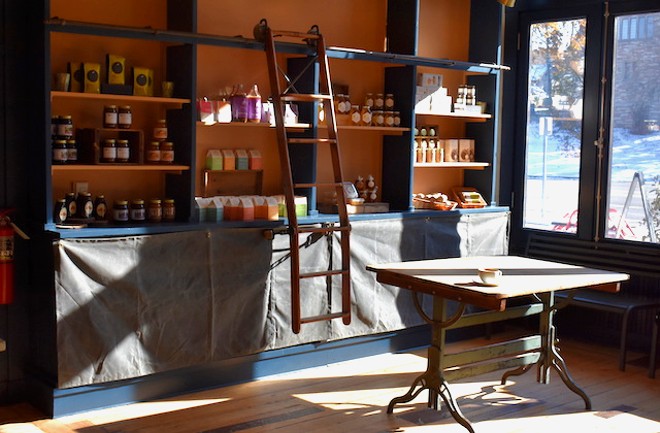 Liz Miller
A selection of the market offerings at Winslow's Table. 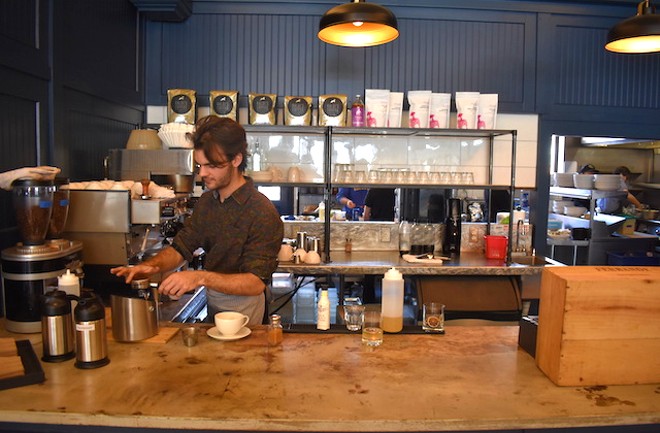