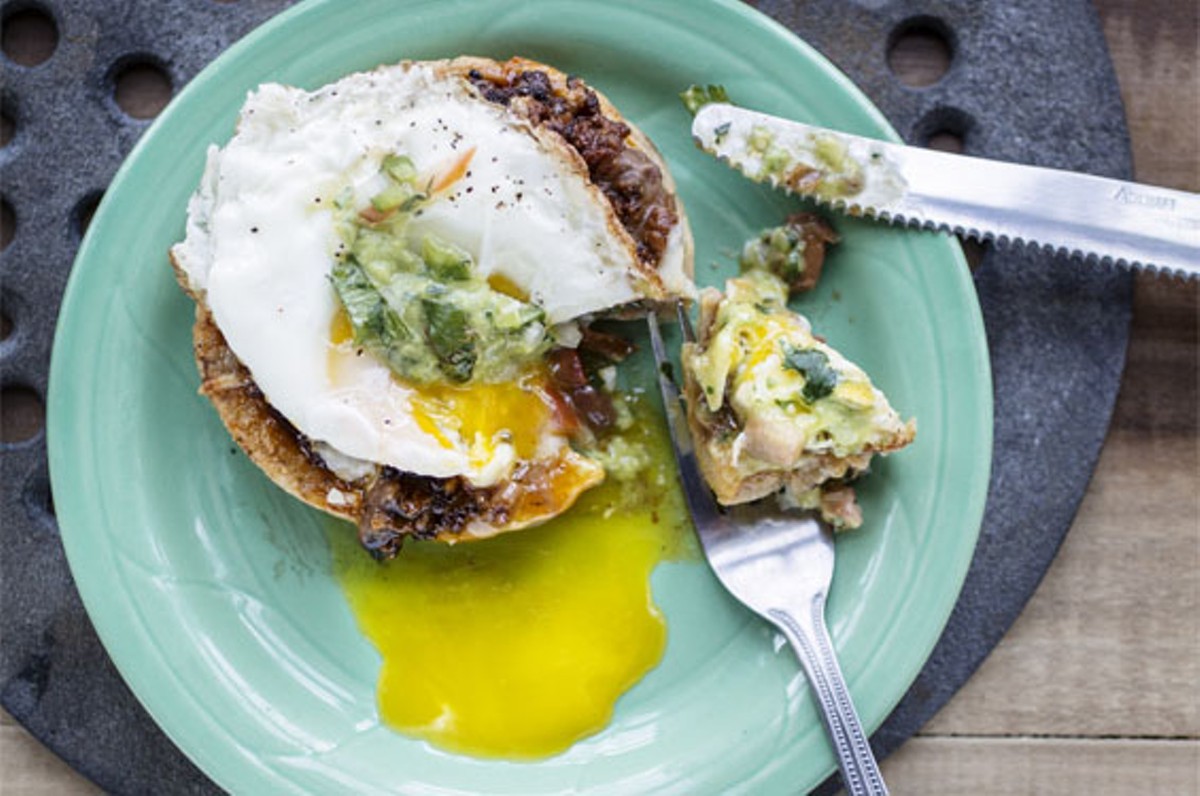 Lassaad Jeliti clearly remembers his first taste of Mexican food. He was a graduate student at Washington University, working part time at Bar Italia, and one of the cooks brought in tacos for his lunch. "It tasted like home," the Tunisian expatriate recalls. "The flavors, the salsas, the spices — it was like being back in Tunisia."

When the same line cook later brought in barbecue, Jeliti was blown away for the second time. Here he was, thousands of miles from home, tasting the same flavors he could get from street vendors in North Africa.

Before I learned this background, it seemed like Spare No Rib, Jeliti's Benton Park restaurant, might be a mess. A barbecue joint and taqueria opened by a Tunisian mathematician sounded like a potentially disastrous hodgepodge. Then I heard Jeliti animatedly detail his culinary epiphany, and it seemed so obvious. The spices, the grilled meats, eating with the hands — as he says, "It's all street food."

Spare No Rib may serve street food, but its location is hardly a food cart. The restaurant is located in the stunning Polar Wave Ice and Fuel Company building, a beautiful brick and glass structure that underwent a renovation yet still retains its vintage look. The entire façade is glass, so natural light fills the sweeping space. The two-story-high ceiling has exposed wooden beams and ducts, giving the restaurant an industrial touch.

If Jeliti's explanation of Spare No Rib sold me on the concept, chef Francisco Lopez's execution of the food made me a believer. The menu is small, but it covers the barbecue and taco basics. The guacamole was delicious in its simplicity; rustic mashed avocado, lime, chopped cilantro and a sprinkle of queso fresco made it the perfect accompaniment for the fresh, salty chips. Our second appetizer, the cheddar and jalapeño corn fritters, were like spicy cornbread funnel cake nuggets. The soft, sweet corn filling was flecked with peppers and coated in a light batter. The fritters are served with a side of spicy ranch dressing, but it was unnecessary — they didn't need anything to cover their flavor.

Spare No Rib's sopes are fried tortilla baskets — hard enough to retain their shape without being overly crunchy. Ours was filled with beans, mild chorizo, and a scrambled egg, then topped with lettuce, guacamole and queso fresco. It's a shame Spare No Rib doesn't open till 11 a.m. because this would make a fantastic south-of-the-border breakfast.

Tacos at Spare No Rib are served in warm, soft corn tortillas straight off the griddle. They come with one of the restaurant's three signature salsas: smoked vegetable, three pepper or tomato chipotle. The cachete — or beef cheeks — was possibly the most succulent and tender meat I have ever had on a taco, slow-braised for hours until it was melt-in-the-mouth tender. The roasted pork and fennel was a close second — juicy and tender with a mild charred taste from the grill. The fennel was softened in pork drippings but retained its characteristic freshness. Spare No Rib's chorizo taco, on the other hand, was tasty and overstuffed, but it lacked texture. The guacamole garnish just added more mushiness.

The fish taco was filled with large hunks of beer-battered whitefish. Instead of the classic cabbage and crema, Spare No Rib serves its version with pico de gallo — a smart choice for the fish, but it was so spicy that it made my lips burn.

The barbecue selection at Spare No Rib is limited to ribs and a few sandwiches. Don't expect a heaping slab on the ribs platter — you get four — but what they lack in size they make up for in taste. The ribs are cooked to the brink of falling off the bone and have a great smoky flavor. The sweet and savory rub tastes like cumin and cinnamon with a hint of coriander. I recommend the mustard sauce — it has an exotic, perfumelike undertone — and don't pass on the cornbread. It was so moist and creamy, I — gasp! — didn't need butter.

The large chunks of pork on the pulled-pork sandwich were soft, glazed with sweet and smoky sauce, and topped with coleslaw for a creamy, cooling effect. The bun caused me a bit of angst — it looked so large that it might dwarf the sandwich (a pet peeve of mine). Instead, the flaky exterior gave way to a light, airy inside that cradled the pork.

Spare No Rib deftly proved me wrong — turns out the flavors of North Africa make perfect sense with tacos and barbecue. It's a small world after all.