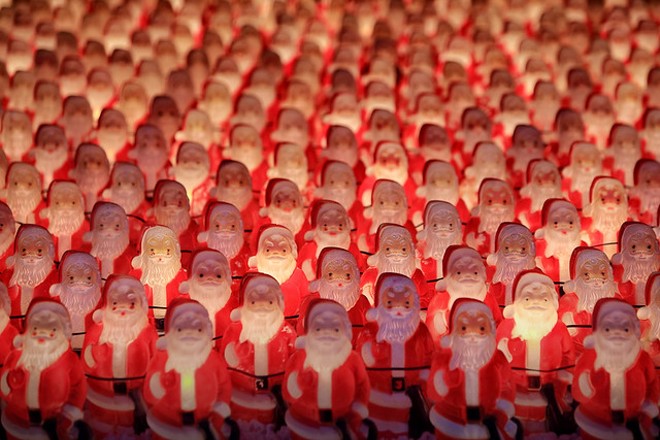 Flickr/ Ian Sane
Are you the sloppy Santa the Vino Gallery is looking for?

Do you enjoy drinking to excess? Can you pull off a Santa suit? If the answer to both questions is yes, you might be just the sloppy drunk Santa a local bar is seeking to find.

Earlier this week, a listing was posted under the St. Louis "talent gigs" thread on Craigslist titled "I need a sloppy drunk Santa." The rest of the ad is as funny as the title, with the original poster explaining that the bar hosts an annual party on Christmas Day wherein regulars share holiday leftovers, watch "shitty Christmas movies like Die Hard" and get drunk. This year, the bar is hoping to add a sloppy drunk Santa to the mix for drunken photo-ops.

It didn't take long for the cheeky post to make the rounds on social media — after all, what says Christmas in St. Louis more than a sloppy drunk St. Nick?

We reached out to the original poster to learn more about this Christmas party traditions — and any other Santa criteria we could pass along to you, dear readers. It turns out that the bar in question is none other than Central West End favorite The Vino Gallery (4701 McPherson Avenue, 314-932-5665), owned by proprietor Alex Head. Reached by phone yesterday, ecommerce manager and shop/bar manager Aerin Soroka says the party has become a beloved tradition for regulars as well as the staff.

"Over the past seven years we've got quite a following," Soroka says. "There's not a ton to do on Christmas and it's very low key. We encourage people to wear their pajamas or something comfortable, bring their leftovers and bring their families — or leave your families at home. Whatever you want to do. We watch not-so-Christmas-y Christmas movies like Die Hard on a little projector screen, listen to music and open some nice bottles of wine. We're making chili this year."

Soroka says she posted the ad after a few drinks, not sure what sort of responses she'd receive.

"I just thought it would make it a little more interesting this year," she says. "I've got a few funny responses so far, but then it got shared on social media and now I'm getting all sorts of requests from people who are either distributors or work in the bar industry saying that they'll come guest bartend. So we're rolling with it: I'm thinking I'm going to do a drunk Santa guest bartender and a drunk Santa/Mrs. Claus photo-op where you can sit with them on the couch."

The Christmas party is also a way for the staff to celebrate their hard work throughout the year, including December, its busiest month. Soroka says that about 90 percent of the Vino Gallery's business comes from selling and shipping wine offsite, which reaches its peak this month. Even so, she says that the wine bar hasn't seen as much foot traffic as in the past year.

"Our lease is up at the end of next year and we'd have to resign in September, so this might potentially be our last Christmas party in our spot," Soroka says. "With our online business being so successful, that's something we should probably focus on. We're hoping to open another spot, but first things first: When our lease is up we're going to get a warehouse and take care of our online business. And we don't get the foot traffic we used to in the Central West End; there's a lot of crap going on in this neighborhood."

The Central West End has recently seen its share of notable restaurant and bar closings, including recent announcements about Culpeppers shuttering and Brennan's planning to relocate. Soroka says that the Vino Gallery hopes to relocate to a more nightlife-friendly neighborhood — ideally, she says, the Grove or Midtown.

"I feel like if we were to go to somewhere like the Grove we'd do ten times as much [wine bar] business," Soroka says. "We're not like a typical wine bar; we're not conventional. It's very approachable — I have wines on the shelf that are $12 that you can drink here. You can drink good wine and not spend a fortune. You're not going to get a snooty attitude if you don't know about wine."

For now, though, the priority is finding the perfect sloppy drunk Santa Claus to bring holiday cheer on Christmas. Soroka says she'll be finalizing details for the guest bartender and Santa photo-op soon, and we will update this post with those details when they're ready to share.

Update: Soroka reached out to us on Friday, December 20 to say that bartender Andy Printy from Bulrush will be guest bartending as Sloppy Santa on Christmas Day. She also noted that due to overwhelming response she may add a second Sloppy Santa bartender as well as the planned Sloppy Santa photo-op. You can find more details at the official Facebook event page here.

In the meantime, if you're up for the job, here's the original post to brush up on before applying:

I need a sloppy drunk Santa.

Historically, we open on Christmas to escape normal holiday shenanigans to venture into a less conventional one.

Join us as we watch shitty Christmas movies like Die Hard (or Moana), get drunk and share leftovers.

I need a sloppy Santa!

I’m thinking about doing a photo op this year with Santa for our Christmas regulars.

Naturally, this Santa should be:
-drunk
-sloppy
-reasonably offensive (be delicate dude! No race/sex/religious/political talk etc)
-speaking of race- doesn’t matter
-able to go home without me worrying at the end of the night

Compensation:
-Uber to venue and back
-all you can drink (within reason, thirsty ass mother fucker)
-3 Bosco sticks (maybe 4... if you’re good)
-8 shots of Malört

Compensation: Lemme get you drunk and make sure you get home safe.


Follow Liz Miller on Twitter at @lizzaymillah. We are always hungry for tips and feedback. Email the author at [email protected]