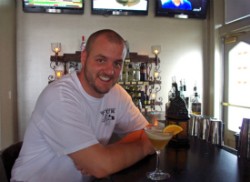 Matt Seiter, bar manager of Sanctuaria (4198 Manchester Avenue; 314-535-9700), will be a finalist in the Paris of the Plains Bartending Competition on Sunday, August 26, in Kansas City. The competition pits twelve bartenders from around the country against one another. Each contestant will mix a drink on stage during the Paris of the Plains Cocktail Festival, with guests given samples of the drinks, and judges determining the grand prize-winner, who will take home a $1,000 cash prize.

Seiter says the $1,000 grand prize would, of course, also be nice, but he wants to help the overall mission of the event, too: "What I'd like to do in my time there is help out those cats in Kansas City and make this more of a Midwest scene, start to make a name for the 'No Coast!'"

In order to get the most out of the weekend, Seiter is working with Kansas City bartender Jenn Tosatto to host a smaller competition on Thursday, August 23, right before Paris of the Plains kicks off.

"The competition on Sunday is more serious," Seiter explains, "We want to kick off the weekend with some fun."

"We came up with what we are hoping to be an annual event: Missouri Mohawk Melee. I have a Mohawk, Jenn has a Mohawk...we'll rename it every year based on who is in it."