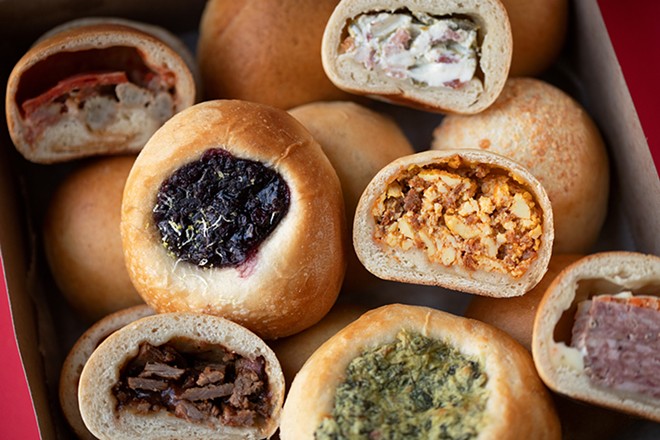 MABEL SUEN
St. Louis Kolache features both sweet and savory fillings in its assortment of kolaches.

Russell Clark still can't believe how well the stars aligned when he got the idea to open his first St. Louis Kolache. A veteran of the restaurant business, he and his fellow industry compatriot, Bart Mantia, had been tossing around the idea of opening a place of their own, but they knew they couldn't come up with the money to start up a steakhouse like Morton's, where they met and worked together for ten years. Instead, they got into the pizza business, opening three Cecil Whitaker's franchises but always searching for another opportunity.

That would come in 2014 when Clark was chatting with some friends who had just moved to Texas. Fellow food lovers, his pals raved about these little pockets of dough called kolaches, a handheld Czech comfort-food staple that consists of various fillings stuffed inside a round, fluffy bun; from their telling, kolache shops were as ubiquitous and beloved in the Lone Star State as Imo's Pizza was in St. Louis. Clark was intrigued, but he didn't think too much more about it until a few days later, when he saw a spot on the Today Show touting kolaches as one of 2015's next big food trends. As he recalls, it was like a light bulb went off in his head.

With Mantia equally on board Clark's kolache train, the friends did some research and development, secured a storefront in Creve Coeur and opened St. Louis Kolache in 2015. Though there had been one other kolache restaurant in St. Louis (a franchise of the national brand Kolache Factory had been operating in Brentwood since 2003), the dish was a relative unknown in the area. But Clark and Mantia were not worried. As they saw it, they were serving nothing more than good ol' American comfort food, just stuffed into a convenient and edible package. They figured that once the word got out, they would do a decent business. Within a matter of weeks, they were so busy they began to think about opening a second store; after seven months, they did just that. Not long after, they opened a third, and, this past January, their fourth location in the Southwest Garden neighborhood.

Clark believes that the success of St. Louis Kolache rests on the notion that nearly every culture on Earth has some sort of stuffed dough bun. China has bao, India the samosa; in Central America, it's the empanada. Gyozas are the Japanese version, mandu the Korean, while ravioli is Italy's stuffed pocket and bourek the Balkans'. However, beyond the stuffed-dough bandwagon, Clark and Mantia have become a successful boutique chain because they have truly made the dish their own by creating fun — even locally influenced — varieties that give their kolaches a distinctive twist.

Their Pappy's Pulled Pork version, for instance, pairs the iconic St. Louis smokehouse's signature offering with St. Louis Kolache's pillow-soft, subtly sweet golden dough. (Like all of St. Louis Kolache's offerings, this is served at room temperature; it's good this way, but a quick blast in a microwave or toaster oven makes them even better.) Here, the succulent shredded pork is tucked inside the bun and baked so that its juices and tangy barbecue sauce soak into the roll from the inside. Not only does this work from a flavor standpoint, it is perhaps the easiest way to eat Pappy's delicious pulled pork without getting too messy.

Clark and Mantia employ another St. Louis institution, Gioia's Deli, for their Hot Salami kolache. For this version, the Italian deli's beloved hot salami — a warm sausage made from pork head meat, beef and seasoning — is tucked into the bun with giardiniera and cheese, forming a filling that is a balance of savory and rich with piquant and spice. It's a fun, outside-of-the-box way to enjoy this glorious staple of the Hill. 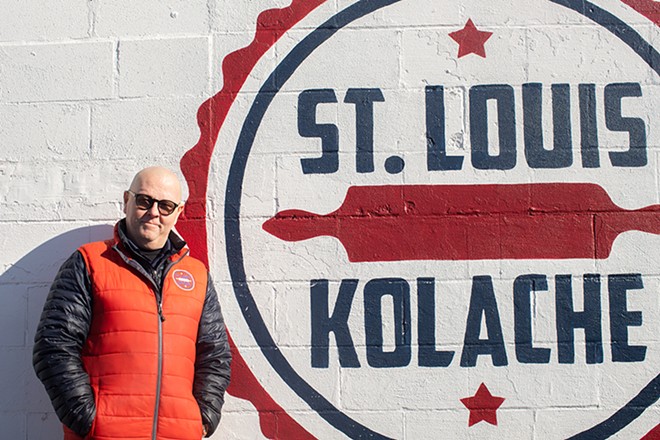 However, St. Louis Kolache does not have to rely on local favorites to excel. A smoked salmon bun pairs large hunks of the hot-smoked fish with cream cheese and capers that is reminiscent of a bagel and lox you'd find at a New York Jewish deli. Cream cheese is also front and center in the jalapeño-popper kolache, which replaces the deep-fried exterior that typically comprises the bar-food staple with the restaurant's crusty roll. Like the traditional version, this one is oozing with rich, cheesy filling and sets the mouth on fire with peppery heat.

St. Louis Kolache plays up that easy comfort-fare vibe on several other dishes as well. A Buffalo chicken kolache uses the shredded meat, tossed in mouth-tingling Buffalo sauce, for the filling; a Philly cheesesteak variety takes thinly sliced steak, diced peppers, onions and gooey pepperjack cheese, then stuffs it into the kolache shell. Another exciting dish is the restaurants' riff on spinach-artichoke dip. Unlike the other kolaches, this version is served open faced, like a tart, and generously filled with a creamy spinach, artichoke and cheese mixture that proves to be a far better way to enjoy the dip than simply scooping it up with tortilla chips.

The restaurant also serves several breakfast-style kolaches, which are a far better — and less messy — fast-food option than a chain breakfast sandwich. Egg and cheese, paired with mildly spiced Mexican-style chorizo, combine for a savory morning treat, while the 'Merica stuffs every bit of diner fare you can imagine — sausage, eggs, bacon and hash browns — into the kolache bun. However, the breakfast dish that steals the show is the Sausage & Gravy, which takes the decadent joy that comes from biscuits and gravy, then stuffs it into a soft pillow of dough. That you can eat this classic Southern breakfast with one hand still on the wheel is nothing short of magic.

St. Louis Kolache also offers several varieties of dessert kolaches, all served open faced. An apple pie kolache features gooey cinnamon and sugar-coated apples, while a raspberry cream cheese offering is like a softer, less flaky version of a cheese Danish. And as with the St. Louis-influenced savory dishes, the partners pay homage to their hometown with a Gooey Butter Cake kolache. Here, the dough does not merely provide a convenient way to enjoy the dessert as a handheld dish, but also mitigates its sometimes cloying sweetness.

Clark and Mantia have bigger plans for St. Louis Kolache than simply stuffing gooey butter cake into their dough (though really, that's a pretty good aspiration). In addition to the four locations they are currently running as corporate stores, they have a couple of franchisees getting ready to open stores in the metro area. They even have a former NFL player on board as a franchisee, with plans to open a store under the franchise brand name American Kolache in Birmingham, Alabama. It's not a bad run for a pair of industry friends who hoped to hop on the biggest food trend of 2015 — with their deft touch, people will be clamoring for these tasty pockets of dough for years to come.