St. Louis' Newest LGBTQ Bar Prism Is Anything But a Drag

Vu Phong
Prism is the Grove's newest LGBTQ+ bar.
Sean Abernathy likes to get to know his patrons before he tells them which type of drag show he thinks they should catch at his newly minted Grove institution, Prism (4510 Manchester Avenue). Hosted six nights a week, and working toward seven, the shows all greatly vary: Sunday nights are dedicated to rising stars, Tuesdays are for the audience to make requests of the queens, while Mondays feature drag kings.

All of this is to say that Prism has something for everyone – and the owners won’t slow down in their quest to make it a safe, enjoyable space for the LGBTQ+ community. Its arrival to the Grove comes at a time where gay bars – such as Novak’s, Attitudes and JJ’s Clubhouse – have shuttered due both to the COVID-19 pandemic and other circumstances. Abernathy takes pride in opening Prism, saying his co-owners and himself saw a need in the community amid the closures.

“We're not the only safe space for the community. Obviously we've got some great bars,” Abernathy says. “We're friends with a lot of the owners, but we have had some bars close down over the last couple years. And so it's kind of reduced the number of safe places that we have. One thing that I think is that I've heard the feedback, especially from the lesbian community, – ‘cause they don't typically have representation in a bar, although there there's a couple around the city – they don't always feel comfortable in all the gay bars. So, I've heard from many people that they feel comfortable here. We were trying to accomplish where everybody feels is welcome [and] it’s working.”

Prism takes the space of the Monocle, another gay bar that put on cabaret shows. A near-makeover has occurred in the residence, except for one mural in the bathroom that Monocle once sported.

The future of the bar’s appearance is what Abernathy describes as a deconstructed rainbow. The main part of the bar has the reds and blues, the Jade Room – formerly known to Monocle regulars as the Emerald Room – where the shows take place is decorated with greens and purples, and future plans for the patio space include the finishing touch of yellows and oranges. Abernathy muses on the ideas for the patio; perhaps there will be a yellow brick road, making changes to where guests come in from the parking lot, adding some kind of bar out there for when nicer weather happens. He credits Prism’s interior designer Nathan Bleidt for handling much of the design, but also for his collaborative nature with the owners. 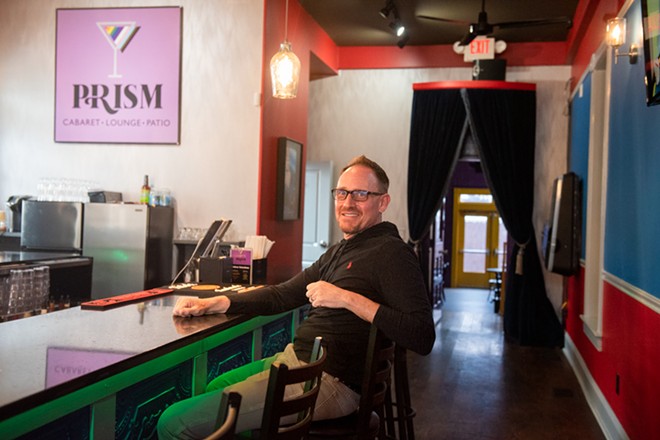 Vu Phong
Sean Abernathy, one of the bar's owners, tells the RFT that he's happy they've created a safe space for the LGBTQ+ community.
Sean Abernathy owns Prism alongside his husband, Jack Abernathy; Matthew Connell who handles the bar’s finances, and cabaret manager Michael Klataske who has performed in the drag scene for 25 years as Jade Sinclair. Sean highlighted how well they all get along and how they're all very involved in the business. Both Abernathys have hopped behind the bar, serving up cocktails to their guests. The bar is something Sean feels the need to highlight, as they have really great bartenders on their staff. The team is working to create drink specials for the venue, but right now they serve a collection of cocktails, wines and beer. 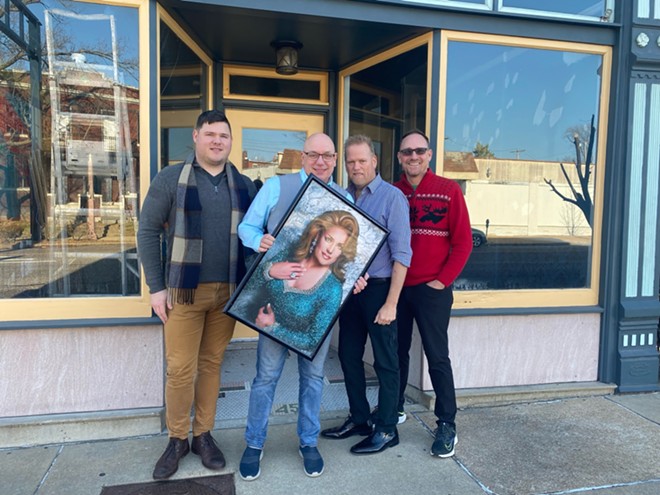 Courtesy Prism STL
From left to right: Matthew Connell, Michael Klataske, Jack Abernathy and Sean Abernathy.
When the four owners saw the opportunity to fill the community’s need, they jumped in, feeling relatively comfortable with the amount of experience they’ve had in other fields. Abernathy and his husband both have prior bar experience, Connell still works full-time as an accountant and of course, Klataske’s drag and cabaret skills apply for show planning.

“We felt like we had a lot of experience that we could all grab onto and use for this,” Abernathy explains. “We've also built a lot of relationships in this community, too, just by being in those safe spaces and seeing people over the years. So we knew that we were pretty confident that just based on the people that we knew and that we would start out being fairly successful. And it did.”

The bar owner notes that they’ve had great success since their January 7 debut, shows often get booked (the bar takes reservations for cabaret shows) and people flood in on Friday and Saturday nights. They’re hoping to move to drag shows seven days a week, eventually. While they’re still building a happy hour crowd and working on creating specials specifically for those who attend during that 3 to 7 p.m. mark, their Sunday brunches – catered by Orlando’s – have drawn a crowd with their enticing bottomless mimosas and $5 Bloody Marys.

Sunday brunch doesn’t have a theme to it, but Abernathy says you’ll never see the same show twice at Prism. Performers may stay the same, but songs and outfits are in a rotation with time limits in order to keep routines fresh and updated. And people are really enjoying the shows, says Abernathy.

“You get all kinds of reactions from just a drag queen walking out,” the bar owner says. “I think when you think of drag queens and you think of some of the TV shows, you think of just like over the top and you don't always necessarily think of just absolutely beautiful and some of them are gorgeous. So, you know, they're all beautiful, but some of them are just drop dead gorgeous. And so you've got the kind of people breathing in when they see them like, ‘Wow, that's beautiful.’ When you get a really upbeat song and people are having fun already, just people just go crazy. And then there's really emotional songs and people are crying. It's just, there's all kinds of emotions that you go through in a drag show, if it's a good one.”