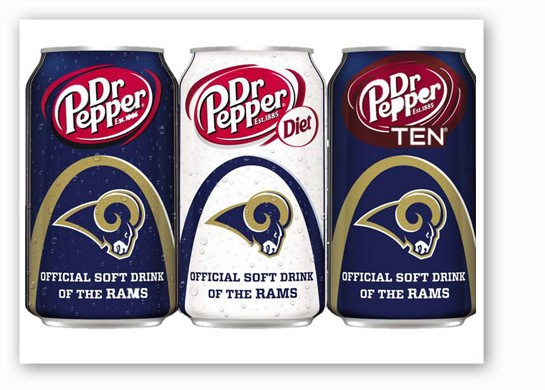 After a seven-year partnership with PepsiCo., the St. Louis Rams have signed a five-year deal with Dr Pepper Snapple that will begin this season. Dr Pepper has similar agreements with the Chicago Bears and the Dallas Cowboys. So what exactly does this mean?

Besides the drinks changing at the Edward Jones Dome (701 Convention Plaza Street; 314-342-5201) (obviously), Rams executive vice president Bob Reif tells Gut Check that the partnership will create a lot more fan involvement in the local market. "It speaks to what we want people to know -- that there's commitment and investment going on in the community," Reif says.

The deal is much better for the Rams and St. Louis fans than the previous Pepsi partnership because Dr Pepper has much more availablity and market support, he says. There will be more than 5 million cans and 5 million bottles with the Rams logo hitting St. Louis stores with the chance to win Rams tickets and prizes.

In another upgrade to the dome, SubZero Vodka Bar (308 North Euclid Avenue; 314-367-1200) is taking over the two bars at the 50-yard line on the club level. There's already a 75-person SubZero club (sold out, of course), but now anyone on that level can get "the SubZero experience." Reif also points out that SubZero Vodka Bar took care of the hospitality and catering when the Rams traveled to London last year to play the New England Patriots.

"It speaks to who they are as operators that they've demonstrated great such success. Derek and Lucas Gamlin are great partners of the Rams," he says. "Broader availability of the SubZero experience is great for us, and it's great for the fans. We're thrilled."

With all these facility upgrades and multiyear contracts -- not to mention the emphasis on "community investment" -- hopefully this means the Rams won't be leaving St. Louis after the 2014 season.