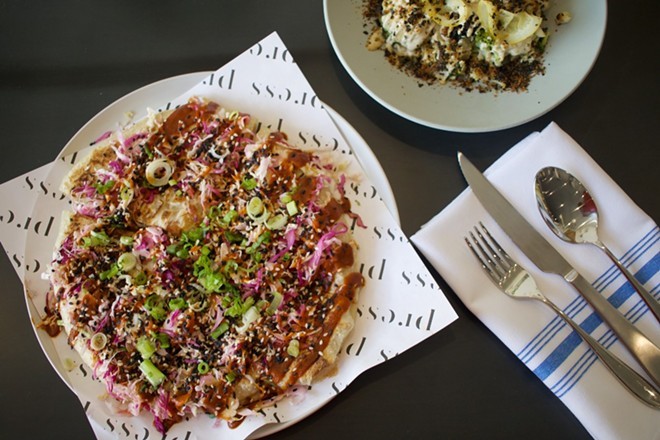 Cheryl Baehr
Press, the much buzzed-about restaurant from Logan Ely, was one of the month's most exciting openings.

Last month, two high-profile openings infused some much needed positive energy into the metro area's dining scene. Press, a casual smashed pizza concept from Logan Ely and the team behind Lucky Accomplice and the pop-up space Shift, opened in Fox Park and breathed fresh life into a former vacant industrial storefront. It's the second time since the start of the pandemic that Ely and company have taken the leap to open a new restaurant (Lucky Accomplice opened its doors in September of 2020), proving that there is still success to be had in this tough era for the industry.

Tower Grove South, too, saw some excitement thanks to chefs Tony and Jessica Nguyen. The husband and wife team opened their debut restaurant, Snō, in the former VP Square space, putting down roots in Tony's hometown after moving back from Los Angeles earlier this year. They could've opened a restaurant anywhere; Tony made a name for himself in Los Angeles' food scene while working for Helene An, who was dubbed "the mother of Asian fusion cuisine" by the Smithsonian. As a result, he was approached with attractive offers to launch his debut spot in California, only to choose St. Louis as the place to plant his flag.

Unfortunately, we also lost some good ones in August. Melo's Pizzeria, an outstanding example of Neapolitan style pies, closed its doors. Pi Pizzeria and Rico Mexican shuttered in Kirkwood, and the longtime Near North Riverfront biker bar Shady Jack's Saloon poured its last beers. Grbic, the iconic Bosnian restaurant located in Dutchtown, shut down its restaurant service to focus on banquets, and Layla, a foundational cocktail bar and beloved burgers and shawarma spot, shuttered its Grove location. Staffing issues were cited as the reason behind most of the closures. And the slog continues...

Cheryl Baehr is the dining editor and restaurant critic for the Riverfront Times and an international woman of mystery. Follow her on the socials at @cherylabaehr
More