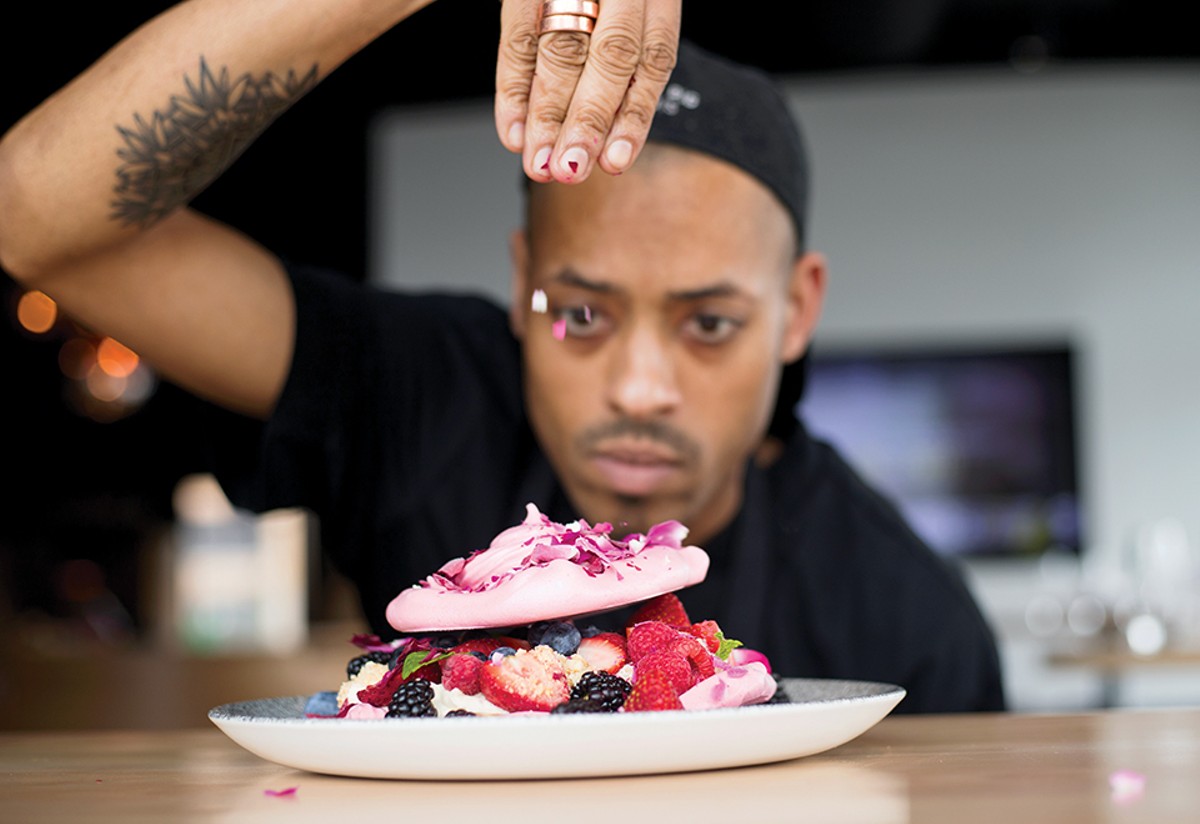 Chef Tai Davis hopes to provide some relief to students in need via his free lunch kits. MABEL SUEN

Like many hospitality professionals in St. Louis, chef Tai Davis has been scrambling to adjust his life to the rapidly developing COVID-19 coronavirus pandemic. However, as concerned as he is for his livelihood — and the livelihoods of his fellow restaurant industry colleagues — there is another segment of the population that has been on his mind lately.

"I feel like kids are a really underlooked segment of our community," Davis says. "We take people's circumstances for granted and can be naive that everyone has the means to take care of their children."

After Missouri and Illinois mandated statewide school closures that will be in effect until at least April 3, people have begun to question how this necessary public health measure could negatively impact those who are food insecure. For folks who participate in Missouri's Free and Reduced Lunch Program, an initiative under the federal National School Lunch Act that provides students with breakfast and lunch every day that classes are in session, school closings can mean the loss of the only meals children may eat on a particular day. According to the Missouri Department of Elementary and Secondary Education, 44,174 free or reduced breakfasts were served in December 2019. For lunch, the number jumps to 129,201.

Davis knows what it's like to depend on that lifeline. From kindergarten through high school, he was a beneficiary of the program and cannot imagine the fear and uncertainty parents and children are experiencing over even the temporary loss of this vital service. After talking with his sister and hearing her concern about her own job in the travel industry and what that would mean for feeding her children, he decided to spring into action.

"I figured, why not make a couple of boxed lunches for people who need it?" Davis says. "I didn't know exactly how I wanted to do it or how big it would get. I just wanted to help feed people. But I started getting messages from people who wanted to volunteer and people who needed help, and it started to increase."

Like many area chefs, Davis has found himself not with just the will but also the spare time right now to take action. Over the past week, restaurants and bars have had to find creative ways to serve guests in the wake of the Centers for Disease Control and Prevention urging for social distancing and crowd avoidance.

The situation has grown even more dire for those in the hospitality industry, and its supporting vendors, with Illinois Governor J.B. Pritzker's order on March 15 that all restaurants and bars close for dine-in service until the end of March. With St. Louis city, county and surrounding area officials signaling that they are poised to follow suit, area restaurants are now faced with empty dining rooms and lost employee wages.

Davis' inclination toward service inspired him to think of others in this time of crisis.

"I decided to take the initiative and the time — I have a lot of it now because everything is on hold," Davis says. "But it's been good, because now I can do something for the community."

After talking with officials at some area school districts, Davis understood how urgent the need for action was. As he explains it, everyone he spoke with was committed to feeding the children who depend on school meals, but the logistics were the hard part. Many planned on delivering meals via the regular school bus routes but could not guarantee specific times of day for the deliveries. Another problem was whether anyone would be allowed into the schools to prepare the meals: School officials expressed concern to Davis about whether or not cafeteria workers would be allowed in school buildings — and no workers means no food.

Davis hopes that his initiative, St. Louis Boxed Lunches, can provide some relief to those in need by providing lunch kits to anyone who reaches out to him. Each kit contains five lunches, consisting of a sandwich, chips, fresh vegetables, a cookie and flavored water. Kits are available at several hubs throughout St. Louis city and county, including Local Harvest Grocery in south city, Racanelli's New York Pizzeria in Webster Groves and Old North Provisions in north city.

To help offset the cost of providing the boxed lunches, Davis set up a fundraiser on Facebook. Within an hour of going live, the crowdsourcing campaign had exceeded its goal.

"I thought I'd just put together a small one and see what happened, and it took off," Davis says. "I've also had people reach out — Angela Castelli of [Sysco's] Natural Tableware asked what we needed, so now they are donating all of our packaging. [Chef] Josh Galliano donated all of our bread from Companion. We've gotten so many donations. It's been overwhelming."

To get the word out to people who might need to take advantage of St. Louis Boxed Lunches, Davis has assembled a team that is contacting area school districts, asking them to put the word out to families through an e-blast and word of mouth. Davis is also aggressively promoting the program on social media and through both Nextdoor and his website, tai-davis.com.

Davis has been inundated with requests from people who want to volunteer with his program, but he is purposely keeping things small to limit the number of people in contact with the lunches. He insists that his team is being cognizant of safety and that only those who are healthy are allowed to help prepare and pack lunches.

He's also adamant that this is a confidential program — that those who reach out can rest assured that they are doing so privately and with no questions asked. Unlike the state's Free and Reduced Lunch Program, those who need a free meal from St. Louis Boxed Lunches will be given one without any paperwork or proof of income requirements. All they have to do is ask.

"The utmost thing we are thinking about is that we don't want people to feel shamed," Davis says. "If your kids need food, come pick it up. If you are hungry and you need food, come in. I don't want them to be hungry. Just be a good human."