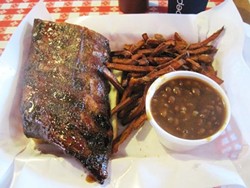 The top overall spot for ribs is Oklahoma Joe's, which is located inside a gas station on the Kansas side of Kansas City.

Texas is the big winner, with six joints among the top twenty, including numbers 2 (Smoke in Dallas), 3 (The Salt Lick in Driftwood) and 5 (Franklin BBQ in Austin).

Dallas has two of the six Texas winners, and the greater Austin area claims three, with the sixth spot about an hour outside of Austin.