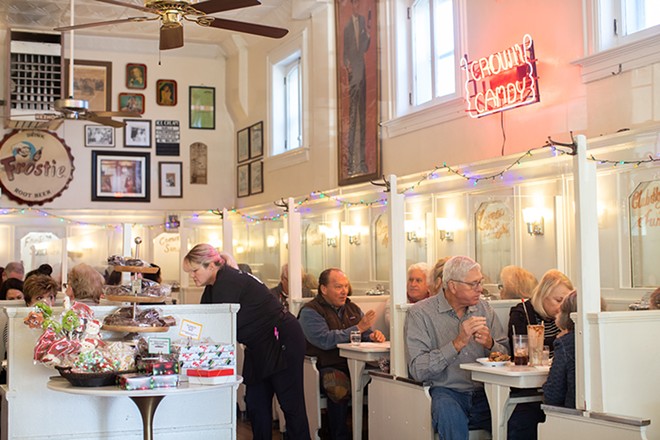 MABEL SUEN
For four generations, the Karandzieff family has given St. Louis its sweet fix at Crown Candy Kitchen.

When Andy Karandzieff wants to illustrate just how much Crown Candy Kitchen (1401 St. Louis Avenue, 314-621-9650) means to him and his family, he brings up his father, George. A former World War II Army tank driver who took over the famous Old North soda fountain from his dad in 1951, George dedicated his life to the business, working sunup to sundown, seven days a week. Easter was always the shop's busy season, and the Karandzieff family knew to put everything else in their lives on hold during that chaotic time of year. It came as no surprise, then, that even when he became very ill and was nearing the end of his life, his dad would not break that vow.

"This is the nature of who we are," Karandzieff says. "It was Easter of 2005, and my father was in hospice. It was literally Easter week, which is high season for us. My father lived for Easter week and loved making and selling the bunnies. We knew he wasn't going to make it, and when we drove Mom home from the nursing home, we told her that if he dies before Easter, we will have to close. She told us he would have to wait because we can't close the store. We said, 'Understood, mom.' We got through the week, then on Easter Sunday we all went and saw Dad, and after we left Mom told him, 'Easter is over, George. You can go now.' He took a breath, closed his eyes and was gone. That was my father; through sheer force of will, he knew he had to make it through Easter so we could make it through Easter week and do what we do."

It was fitting that Karandzieff's dad would have held true to his commitment to Crown Candy all the way to the end. Founded in 1913 by George's father, Harry Karandzieff, the shop is a living history of both the family and the city of St. Louis. Karandzieff takes pride in that legacy: His grandfather, a Greek émigré who traveled to the United States with just a few dollars and some confectionary skills, founded the now-institution as a candy shop with an intentionally vague name so as not to hint at his immigrant background. That it has not just survived, but thrived, for over 100 years is a testament to his family's commitment to the shop, the neighborhood, the city and the loyal guests who bring generations of their families to the corner of 14th Street and St. Louis Avenue year after year. 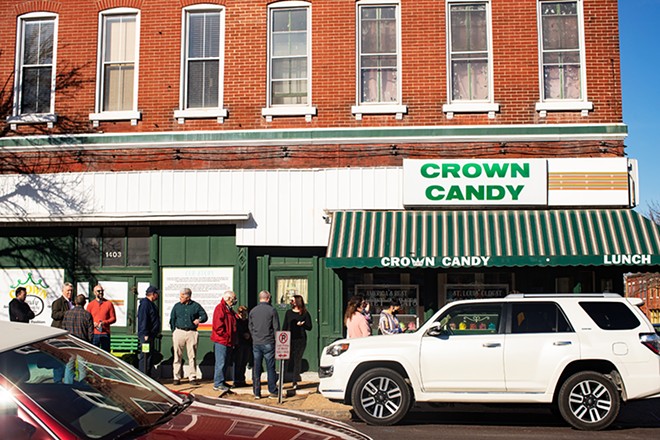 MABEL SUEN
Folks line up around the block for a taste of bacon, ice cream and nostalgia.

Karandzieff believes that one of the main keys to Crown Candy's success is that it has not fundamentally altered anything about itself over those years, but has stayed true to its roots as a confectionery and soda fountain. Though originally established as a candy shop alone, Karandzieff's grandfather added ice cream in the 1920s, but did not serve food until after George took over — apparently giving in because people kept getting confused by the word "kitchen" in the name. Between the food service and candy-making, George needed help, and he drafted his sons, Karandzieff and his brothers, Mike and Tommy, to assist him in steering the ship.

As the boys got older, they began taking the reins from their dad, which coincided with an uptick in their lunch business. Karandzieff credits that change to several local media personalities such as Jack Carney and Jerry Berger who began promoting the shop on their radio shows and in newspaper columns. Before the Karandzieffs knew it, they became inundated with hungry customers who would line up for their simple soda-fountain fare — and one sandwich in particular.

"People always want to know how the BLT came about," Karandzieff laughs. "We blame our employees. It didn't start out so big, but eventually, they just kept putting more and more bacon on it, and it became a thing. Once that happened, it was too late to go back, and suddenly, we were known for our BLT." 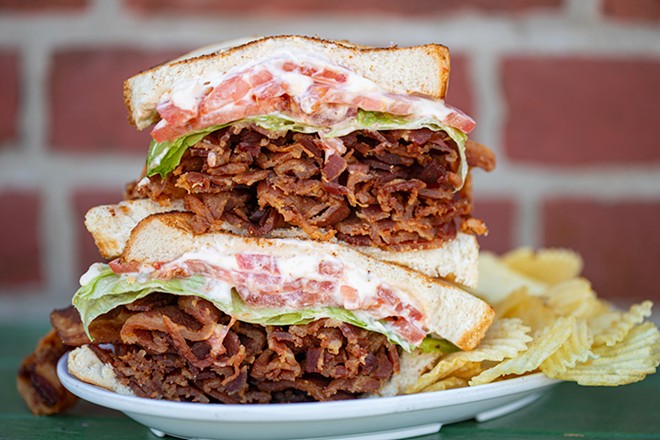 The BLT may have been a happy accident, but it put the restaurant on the national radar, thanks to Karandzieff's quick thinking and a television show called Man vs. Food. In 2009, Karandzieff was contacted by the Food Network, informing him that the host of the show, Adam Richman, was coming to town to try the shop's infamous Five Malt Challenge, which requires contestants to drink five malts or shakes within 30 minutes. Richman didn't make it past four shakes, and as he staggered to the door, Karandzieff caught up with him and handed him a BLT, not knowing that the simple act of mercy would put the restaurant on the national map.

"After he failed the challenge, he was on the way out the door and looked like death," Karandzieff recalls. "I gave him a BLT and told him that he was going to be hungry in about a half hour after he got back to his hotel room, and that he needed to eat it. A couple of years later, I got a call from a producer for a show called The Best Sandwich in America saying they wanted to feature the BLT. When Richman came in for the show, he told me it saved his life that night. That's something I learned from my father: If you take care of people, that nice gesture comes back."

Following the Best Sandwich in America feature, business went through the roof — Karandzieff laughs that he and his staff fry bacon fourteen hours a day just to keep up. He admits it is a lot to have on his shoulders, especially after losing his brother Mike to stomach cancer in 2012. He credits his wife, Sherri, with being his rock and helping the shop with much of the behind-the-scenes website and branding work, as well as the other family members who continue to pitch in to keep the restaurant going. 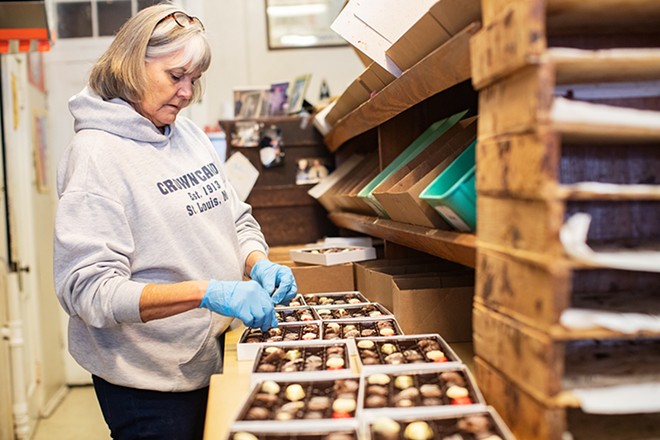 MABEL SUEN
A confectionary at heart, Crown Candy Kitchen is known for its seasonal chocolates.

"All these little decisions my father and grandfather made are the reason we survived," Karandzieff says. "I take it for granted some days and don't think about it, and some I am overwhelmed with how much responsibility is on my shoulders — to our employees, customers and our family legacy. If you see me drinking tequila on Friday nights, you know why."

Still, for all the ups, downs, challenges, long hours, crazy holiday seasons and everything else that comes along with being in charge of one of the city's most storied food institutions, Karandzieff wouldn't have it any other way. Knowing how much Crown Candy means to everyone it has touched — whether they are in the neighborhood or coming from many miles away — is what keeps him going and drives him to ensure that the shop will be serving bacon and chocolate bunnies from his little corner of north St. Louis for years to come.

"We've been here for 108 years, and I am not going anywhere," Karandzieff says. "This is our home. We live here; this is where our family has been for over a century. If I move, I am just another ice cream store in a strip mall like anyone else. Maybe we would be successful, but maybe not. I believe we are still successful because we are here on this corner; generations of customers want that connection to their past. I'm proud of what my family has done and that we are still here. It's pretty amazing that a little ice cream shop in the city is still chugging along after all these years. We are fortunate and blessed from that standpoint, and I am a very lucky person."