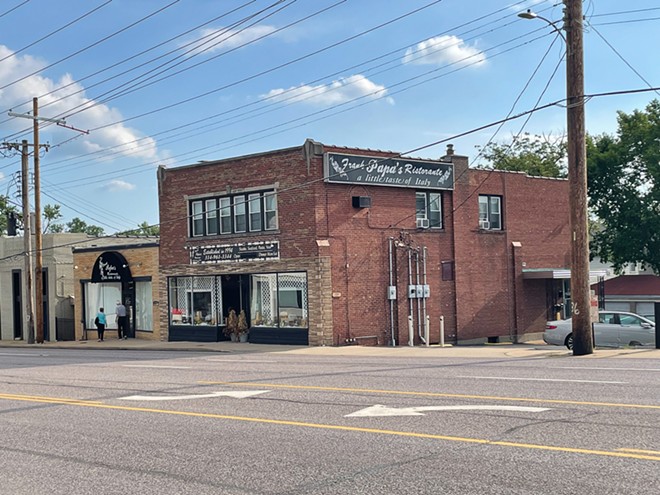 Andy Paulissen
Frank Papa's has been a St. Louis institution for 28 years.

When Rob Duerscheidt bought the storied Frank Papa's Ristorante from his eponymous uncle, it represented the culmination of his culinary career, a homecoming to the place where he became a chef and a passing on of his family's legacy. It was also April 1.

"Yes, I bought a restaurant on April Fools' Day," Duerscheidt laughs. "The irony of that date is not lost on me."

Considering Frank Papa's position as an icon of the St. Louis restaurant scene, the foolish thing for Duerscheidt to do would have been pass up such an opportunity. Since its founding in 1994, Frank Papa's has been an integral thread in the area's Italian dining fabric with roots that go back to some of St. Louis' biggest food names, including the Pasta House's late Kim Tucci and the late Vince Bommarito, who founded Tony's. Frank Papa came up in the business under these esteemed names, leveraging the knowledge gained from them, as well as his culinary school training, into a place of his own that has achieved a staying power few restaurants enjoy.

However, the roots of Frank Papa's stretch even farther back — all the way to Papa's grandfather and Duerscheidt's great-grandfather, a Sicilian immigrant whose passion for cooking became the Papa family way. After immigrating to the United States, the patriarch worked as a laborer for the Alaska pipeline. A talented cook, he saw the mess being made in the mess hall and asked if he could help out in the kitchen. It became his permanent posting until he returned to St. Louis. There he started his own restaurant, a humble tavern in north St. Louis that became a gathering spot for local train conductors and drivers and where Papa Sr. cooked up fish stews and soup. 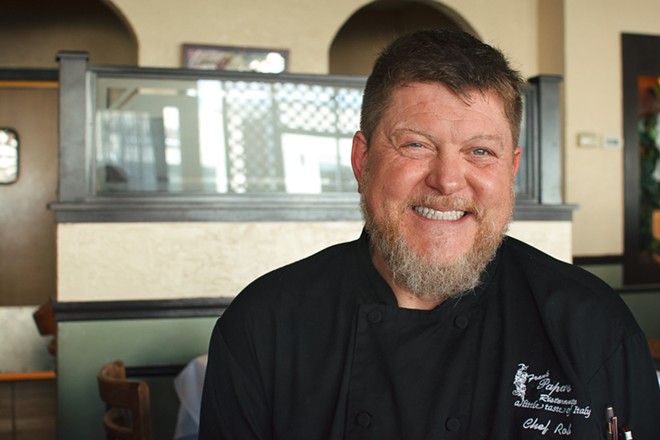 Sunday dinners became a Papa family ritual where he served dishes more involved than his tavern fare — he even had an addition built on the house just to accommodate his large brood. Ravioli, chicken cacciatore and his special large bowl of salad were the norm, and it was expected that the younger family members would lend their hands in preparing the meal.

"He probably started me and Frank's culinary career," Duerscheidt says. "We'd get there early to set the table and peel potatoes. He'd teach us with a peeler so that when he handed us a paring knife, we were doing the same motion."

Frank Papa's father was a passionate home cook, but he never pursued a career in the restaurant business. Instead, he worked for aerospace company McDonnell Douglas but made sure to instill in his son a love for food. Frank Papa took that passion and ran with it, getting his feet wet at an early age in Italian kitchens around town before heading off to culinary school at Johnson & Wales University in Rhode Island. When he returned to town, he dreamed of opening his own place but instead chose to gain experience working for veteran chefs.

In 1994, Frank Papa and his wife, Diana, finally felt ready to take the leap into restaurant ownership. They found a location they liked in Kirkwood but got into a bidding war with another Frank — Frank Kane, who would go on open the beloved steakhouse Citizen Kane's. Undeterred, they kept looking and found a small storefront right off Brentwood Boulevard that felt like it was 20 minutes from everywhere. They signed the paperwork, opened that April and were greeted with success. 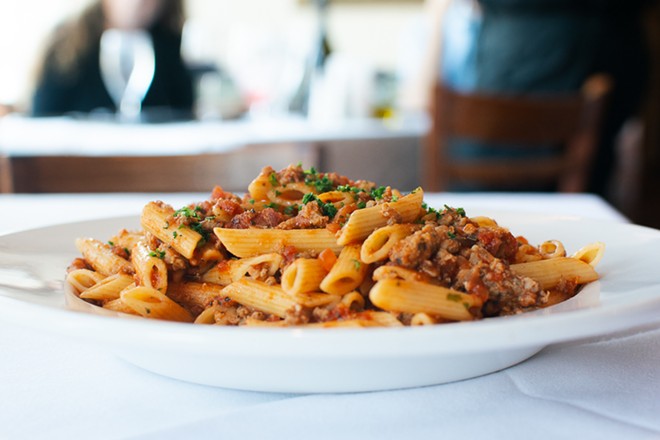 Andy Paulissen
The penne amatriciana, known as the Eviction Notice, is said to help induce labor in those past their due dates.

Almost immediately, his uncle invited Duerscheidt to work under him as a culinary apprentice following a several-year gig with the chain restaurant Perkins. Though that corporate job taught Duerscheidt a great deal, he feels his culinary career truly began under his uncle, whom he credits with giving him the knowledge and skills he needed to succeed in the industry. Duerscheidt leaned on that training when he relocated to Chicago and took on a leadership role at the iconic Italian Village. Duerscheidt later moved out of restaurant work into food sales and distribution with Sysco, a job that he kept after moving back to St. Louis a couple years ago. It was a fine-enough gig, but one day he walked into Frank Papa's and was greeted by his uncle, who made an important observation.

"He told me I looked miserable," Duerscheidt says. "His sister, my mom, had just retired, and he was thinking about retiring, too. He said that he could sell the restaurant to a stranger and hope that it worked out, or I could take it over. ... I was part of the family; that was the whole point — to keep the legacy going."

Upon returning to Frank Papa's, Duerscheidt first focused on the front of the house so that diners could develop a rapport and comfort with him. When the restaurant's chef left to pursue a career in real estate, he moved to the kitchen and began sketching out the transition with his uncle. COVID-19 put their plans on hold, but in March of this year, things fell into place.

"Customer support [during that time] was amazing," Duerscheidt says. "For a while, all we did was carryout, and there would be a couple of hours every night that we'd be rocking. The generosity of customers was phenomenal; there were exorbitant tips, and when we finally reopened, we had one customer come in with a piece of paper that had on it the dates he would have dined here. He handed us cash and said that it was what he would have spent."

Andy Paulissen
Frank Papa's success has come from its relationship with its customers.

Duerscheidt knows that people responded as they did during those difficult times because the restaurant means so much to them. He feels honored to be the one now in charge and is protective of his family's legacy. In that sense, he is emphatic that he plans on keeping things running as they always have.

"People fear change, so I don't plan on doing a lot of change," Duerscheidt says. "There's no point in doing that. I just want to keep the train on the tracks."

One particular dish Duerscheidt knows not to touch is the restaurant's penne amatriciana, also known as the Eviction Notice. Though he's not quite sure where the legend started, the dish is said to induce labor in people past their due dates who need a little push. 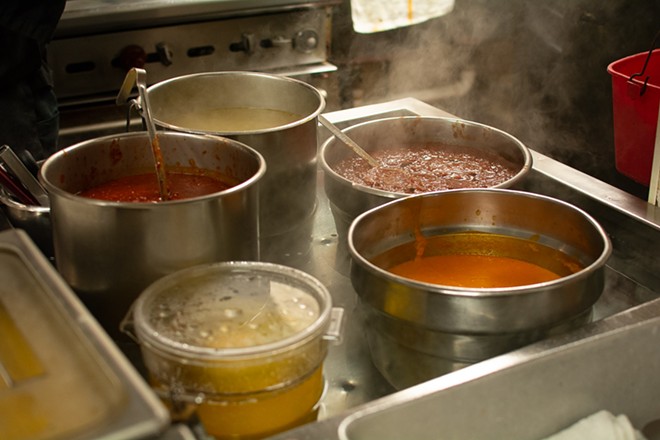 Andy Paulissen
Frank Papa and his wife, Diana, opened up the restaurant in 1994.

"I actually have doctors who will send their patients here who are close but not quite there," Duerscheidt laughs. "I'm not sure of the science behind it; there's talk that it is about the red pepper or oil or sausage or pancetta. My personal opinion is that the dish helps, but it is more about the relaxation. ... [I] made the pasta for [my sister in-law] at her house. She took one bite, and her water broke. As far as I know, she was ready, but I am claiming it."

That Frank Papa's has such stories is the core of its success. As Duerscheidt notes, the food is important, but it's the relationships developed over the years that endear diners to the restaurant and vice versa. He has several staff members who have worked for him for 10, 20, even 25 years, and their tenures have allowed them to get to know their customers as more than just guests; they are family.

"When you have been around as long as us, you have the happy moments and the sad moments," Duerscheidt says. "You watch people grow up and get married, but you have also been to way too many funerals. That's the business. There is a passion for food but also a serious passion for people. If you don't enjoy it and love it, you need to go work for McDonnell Douglas."