The iconic shop, run by the Koebbe family, has been serving pretzels since 1920 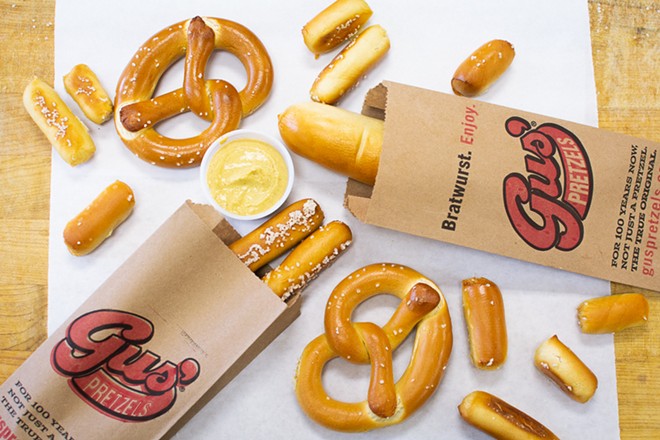 Andy Paulissen
Gus' Pretzels has been a St. Louis institution for over 100 years.

Gus Koebbe III and his dad, Gus Jr., like to joke around that the reason they have stayed in the pretzel business so long is a matter of endurance and bad decisions.


"My dad always jokes that we weren't smart enough to get out," Koebbe says with a laugh. "He says that everybody else got smart and got out, but we stayed. My dad encouraged me to do other things when I was getting ready to take it over just like his dad did for him. When he was getting ready to sign the papers, his dad told him, 'Don't do it,' because it's confining. You work weekends, and in the summertime, it's busy season, so you can't do things with your family. But this is in our blood. We really enjoy being a part of people's memories."

As the fourth generation of his family to run the iconic Gus' Pretzels (1820 Arsenal Street, 314-664-4010), Koebbe knows that he is not simply taking over a family business; he's serving as a steward of an institution that has woven itself into the very fabric of St. Louis. It's a legacy that began in the early 1900s with Koebbe's great-grandfather, Frank Ramsperger, a riveter by trade who had to change careers after losing his eye in a work accident. Because of his injury and the Great Depression-era employment climate, he was unable to find work and had to figure out a way to support his family. A relative knew the wholesale pretzel business, and he taught Ramsperger all he needed to know to get started with his own shop.

Ramsperger found success with his business, operating as a wholesale baker to the pretzel peddlers who'd sell their wares to passersby at intersections around town. In 1920, his daughter Marcella was born, a date they mark as Gus' founding because of how instrumental she was in making Gus' what it is today. Koebbe describes Grandma Marcella as the family's matriarch, and she loved Gus' so deeply that it was only natural she'd take over the reins as soon as she was old enough to do so. Together with her husband, Gus Koebbe, Marcella ran the business as her father had, eventually buying it from him in 1952. Until that point, it didn't really have a name — and it might not have ever had one except for someone owing Marcella and Gus money who came up with a creative solution to pay off that debt.

"My dad loves to tell stories, and the one he always tells about the name is that someone wanted to pay my grandpa in the form of a sign," Koebbe says. "He didn't know what to call it, so he just had the sign say Gus' Pretzels. That's how the name happened."

Marcella and Gus Sr. had seven children; Koebbe's father, the fifth in birth order, was the first boy, so he inherited the name Gus Jr., and unofficially, the responsibility to carry on the family's legacy, even if his father did not necessarily want him to. At first, Gus Jr. took his dad's advice and got a job as a computer programmer. However, he could not shake the feeling that he was meant to follow in his mom and dad's footsteps, and he bought the business from his parents in 1980. Koebbe created the Gus' people know and love today; under his stewardship, it pivoted toward its retail business, something that needed to happen considering that pretzel peddling was becoming a dying art. Gus Jr. expanded the facilities by building on a large production area, and he even came up with the pretzel-wrapped brat in order to cater to the Anheuser-Busch brewery employees who worked just down the road from the shop. 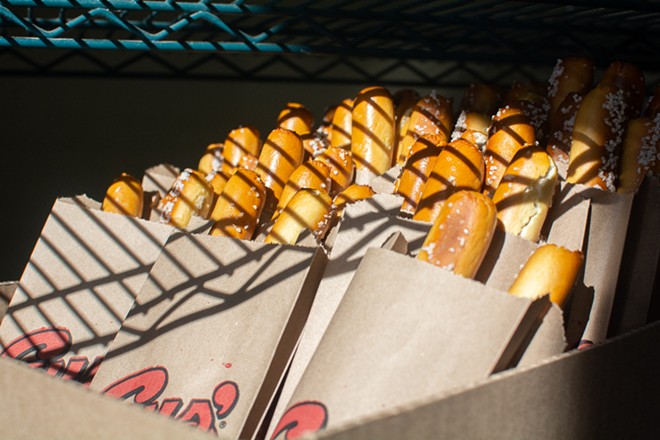 For as long as he can remember, Koebbe was there with his dad, making shapes with the old dough to keep himself occupied when he was a little boy, then working his way up to sweeping the floor when he was old enough to handle a broom. He has fond memories of stopping in at the now-shuttered California Do-Nut Co. on Jefferson Avenue on his way to work with his dad on the weekends, getting a hot doughnut and spending his days helping out around the shop making a dollar an hour — what he felt was big money to a six-year-old.

It made sense that Koebbe would take over for his dad, and after dabbling in other industries during college, he made his way back to Gus' in 2008, buying the shop with his wife in 2020. He admits it was an interesting time to take on a business. Though Gus' was set up better than a lot of other industries, the COVID-19 pandemic presented its share of challenges, including a significant drop in festival and events business, staffing issues and supply disruptions. Still, he takes it in stride.

"My great-grandpa started during the Depression, my grandpa had his share of trials and my dad opened a location in Union Station that didn't work out," Koebbe says. "Every generation has gone through a tough time, but they have always made it through. My dad always tells me that this is my tough time, and it's what I am going to tell my kids about one day. I'm just glad I'm getting mine out of the way now, and maybe then I can relax."

Andy Paulissen
Legend has it that Gus' Pretzels is where the pretzel stick was invented.

Koebbe knows that there is no real relaxation around the corner, however. He admits the pretzel business is intense, requiring long hours, weekends and hard, physical work. Still, he can't imagine doing anything else. To be a part of people's celebrations is a privilege he doesn't take for granted, and there is nothing he enjoys more than hearing people come into the shop to share memories about getting pretzels for their birthdays in the shapes of their ages or stories about grandparents who were pretzel peddlers. If he has his way, he will be hearing those stories for years to come — and hopefully his kids will, too.

"It's good hearing those stories and how you are part of people's traditions and memories," Koebbe says. "This is one of those things that connects people, and it's nice being a part of that list of places that people have to visit when they come in town. There is nothing better than hearing someone tell you that they came in town and stopped here straight from the airport, even before they see their family and friends. It's the best compliment you can get."