ANDY PAULISSEN
Mom's Deli has been a mainstay of the St. Louis deli scene since 1977.

Dolores Vago did not want to open another grocery store.

For years, she’d worked alongside her husband, Charles Vago, at his grocery and butcher shop until it got shuttered to make way for part of I-44 in the 1970s. Determined to take a break from the business, Dolores staunchly advocated against taking over the storefront on Jamieson and Landsdowne after Charles happened upon it, but he was insistent — so much so that he came up with the perfect solution to get her on board.

“He named it after her,” laughs Denise Vago, Charles’ and Dolores’ granddaughter and the current manager of Mom’s Deli. “She wanted nothing to do with it, so he named it Mom’s. Of course she ended up helping; she couldn’t get away from it, because they lived in the apartment above the store. My dad used to say there was no way to get away from it because you were always down at the store or upstairs at the apartment.”

Forty-four years later, there’s no way that Dolores could look down upon her namesake and feel anything but pride. Since 1977, Mom’s Deli has been a mainstay of south St. Louis thanks to its outrageously good deli sandwiches and nostalgic vibe — little of which has changed over the years, down to the Spuds MacKenzie statue over the beer cooler.

However, as Denise explains, Mom’s didn’t start out as a sandwich shop at all — just a small, corner market with groceries, a deli and pharmacy items that serviced the surrounding neighborhood. Over the course of the first year, Dolores and Charles added a few sandwiches named after themselves and the two sons who worked at the business. As word of their sandwiches spread, they began adding more and more offerings to the list until the shop’s deli business dwarfed everything else.

Sadly, Charles was not around long enough to see the deli’s sandwich reputation grow. The patriarch passed away just a year after Mom’s Deli opened, leaving Dolores, her son Charles Jr. and her son Ron to run the business. After several years, Dolores sold the deli to her sons, who ran it as a partnership until Ron needed to get out to take care of his sick wife. He sold his portion to Charles Jr., who was the figurehead of the store until he passed away in 2017, leaving his daughter, Denise, to carry on the family’s legacy.

“I’ve been working there for 22 years, though I left for a while to go to college, and then work for a builder and get my real estate license,” Denise says. “But then my dad got sick with bladder cancer and asked if I would come back and help out, so I did. It’s family. If they call and need help, that’s what you do.”
click to enlarge 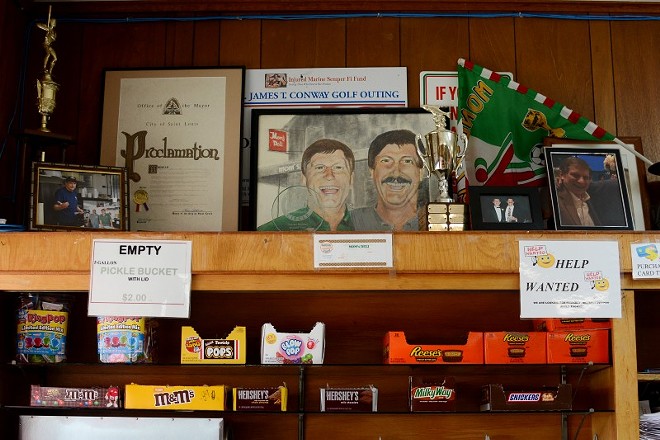 ANDY PAULISSEN
Mom's has held steady as it passes from generation to generation.


Denise believes coming back when she did was a blessing, because it allowed her to work alongside her dad for a few years, learning the ins and outs of the business so that she was well prepared to take over when the time came. That moment happened four years ago when her father passed away, leaving her in charge. She admits it was difficult at first — reminders of her dad are throughout the deli — but she feels confident she is following in his footsteps the way he would have wanted her to.

Part of that comes from her commitment to keeping Mom’s the same as it’s ever been. As Denise explains, people come for the nostalgia as much as the sandwiches, taking comfort in the fact that the deli remains a constant in their lives. Aside from decreasing the amount of groceries they carry, the biggest change at Mom’s was when they got a credit card machine — something Denise had to fight her dad on until he finally relented.

“Dad always carried cash and he never used credit cards,” Denise says. “However, we started losing some of our big party sandwich orders and he didn’t understand why. I told him that people just don’t carry cash for that, and he said, ‘Fine, get credit cards.’ That’s all I had to hear, and I immediately called the credit card company. It really turned our business around, and Dad told me what a great idea it was. It only took me seven years to convince him.”

If the credit card machine is Mom’s biggest change, its most visible constant is longtime employee Marion, who, at 95 years old, still works five days a week slicing beef, onions and tomatoes, and making sandwiches just as she has since September of 1977. The deli’s unofficial figurehead, people often assume she’s the “mom” of Mom’s Deli, but she’s quick to clear things up.

Aside from Marion’s no-nonsense demeanor and shocking sandwich-making speed, a few other things have stood the test of time at Mom’s. There’s the Thousand Island dressing, a glorious concoction that Denise insists on making by hand, whipping upwards of 36 gallons a week the old-fashioned way with a bowl and a spatula. She jokes that she has the biggest right arm muscle around, but she refuses to use a mixer, worrying that it might change the flavor. She’s also hesitant to do anything differently with the other items they make in-house, like the mostaccioli sauce, the mustard-mayo combo and the au jus for the roast beef. Perhaps no one would notice any tweaks, but Denise would, and she’d rather be a steward than someone eager to change what’s worked all these years.

“We get people to come back because we’re a mom-and-pop and also because of the nostalgia,” Denise says. “We have people come in who haven’t been here in ten years, and they comment on how it’s exactly the same. I tell them, ‘I know. We are all still here with the same menu, the same setup, the same wood paneling.’ I just can’t change it. It’s the nostalgia of it; that’s what you expect to see.”