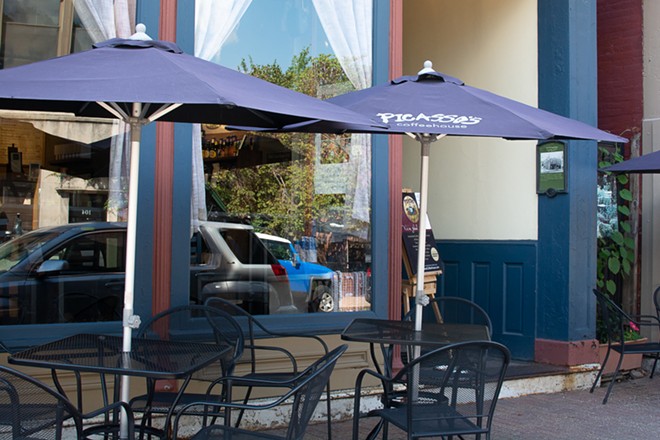 Enter Picasso's Coffee (Two locations including 101 North Main Street, St. Charles, 636-925-2911) on Historic Main Street in St. Charles, and you'll find a quaint spot dimly lit and filled to the brim with a diverse crowd. In one corner, a college student scribbles furiously in a notebook; in the next, a group of older men recap their days. Another corner houses a microphone on certain evenings, luring those brave enough to perform in front of the night's crowd.

From the first moment you step into the door, everyone and everything makes Picasso's feel like home — like you could seamlessly blend into the crowd and feel like you've known those around you for years.

But the coffee shop wasn't intentionally set up to feel this homey. In fact, it began as a simple career change.

Owner Chris Schulte was working for Miller Brewing Company before he ventured into the coffee industry. He traveled and worked in places such as Des Moines, Iowa, and Kansas City, Missouri, before settling in St. Louis. But he had a longtime dream of opening a coffeehouse. In 2003, Schulte took the leap.

"I love good coffee," Schulte says. "Back then, I really didn't know what I was getting into. I think, at the time, I was just wanting to have my own business, start my own company. I didn't expect the relationships. You get to know so many people, and it becomes one big family, and that's the main thing."

Schulte spent time traveling and scribbling ideas down in the two years before leaving Miller. He recalls walking the entire city of San Diego at one point, going coffee shop to shop, taking notes on what he liked and didn't like about each one, so he could apply it to his business. Then, rinse and repeat for each city, hundreds of visits that helped give rise to Picasso's reign.

The coffee shop's name has roots back to Schulte's childhood; his mother, a Spanish teacher, loved the artist Pablo Picasso and ingrained that love of Picasso and Spain into a young Schulte. If you don't want to take his word for it, all Schulte has to do is pull up his sleeve to reveal a Picasso-inspired tattoo. 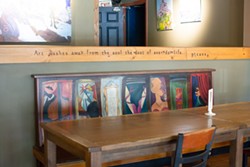 Andy Paulissen
The shops are full of artwork, both inspired by Picasso and Spain or by local artists.

Picking "Picasso's" felt like a natural way to pay homage to his mom, and Schulte figured that each drink in his shop should have an artsy name to go along with the theme. "And then 'The art of coffee' is just the tagline, which is kind of cheesy," Schulte says with a laugh. But it works. Each coffee crafted within the four walls is a masterpiece, topped with beautiful designs in the foam. Schulte backs up his tagline by putting local artists' work on the coffee blends' packaging and through open-mic nights at the Historic Main Street location. 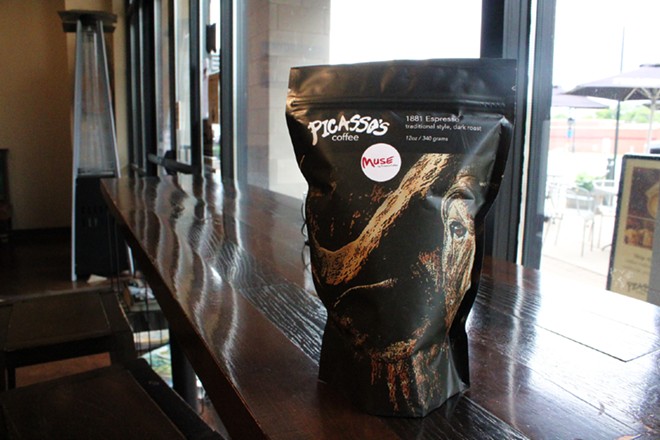 Schulte opened the original Picasso's location in O'Fallon, Missouri, where he was drawn to the prospect of a coffee shop because of the community around the business. The store in O'Fallon remained open for about four years before making a permanent move to its home on Historic Main Street, which opened in 2005, and Schulte opened another location in St. Charles on Beale Street about six years after that. The coffee industry is very neighborhood-centric, Schulte says, explaining that everyone goes only to their neighborhood coffee shop and that the Picasso's customer base is over 50 percent regulars.

Through open-mic nights and St. Charles residents' support, the coffee shops have become a landmark of the city. That stable base became key during the pandemic, when support from the community and city officials helped the two locations make it through a time notoriously difficult for food establishments. 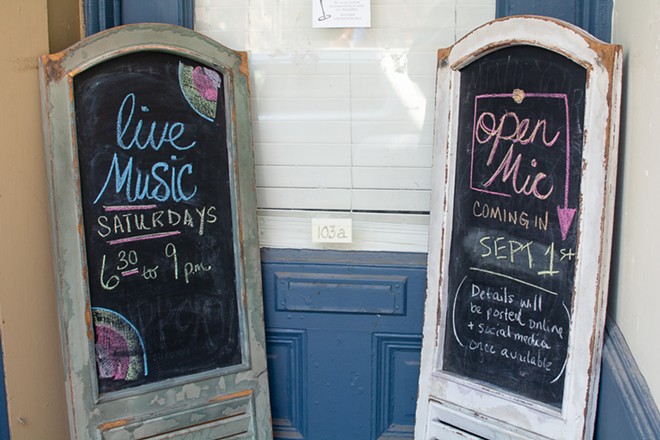 Picasso's went through business-model changes during the COVID-19 pandemic — closing the dining room, offering curbside pickup and shipping coffee blends nationwide — like many other shops, and now is finally getting to a place where it can focus on rebuilding the in-person community aspect.

"For a couple of years, that community piece of it seemed to be lost because we couldn't have a dining room, we couldn't have music for a while," Schulte says. "We just shut down completely, and it really was tough."

Knowing Picasso's would get back to a place where it would be comfortable welcoming everyone and playing live music again — which take place on Friday and Saturday nights — is what kept the staff going. Schulte is excited for a new partnership with rootbound, a coffee shop that opened down the street, where they'll take turns hosting the open-mic nights. As the "old dog on the block," Schulte says, it'll be fun to bring in some new blood.

Picasso's leans heavily on its team. Schulte begins listing off the names as he sits in a chair at the Beale Street location: There's Chip and Jenna, a married couple who work at separate locations but met in the stores; there's Austin working behind the counter; and there's Chef Chris, the kitchen manager, who has "really elevated" the food program at Picasso's, Schulte says. All together, there are more than a dozen upbeat, diverse people who work to keep Picasso's running. 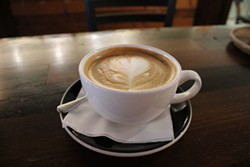 Jenna Jones
One of the lattes at Picasso's.

The team is close knit. They go to coffee-roasting classes together, and they do holiday parties; Schulte encourages a family atmosphere. Fostering those relationships among staff is all part of keeping the shop going — good people are essential, and it's a labor-intensive business. Schulte tries to hire those dedicated to the art of being a barista; Picasso's can roast the best coffee in the world, but if the barista doesn't pull the right espresso or steam the milk correctly, the coffee will be ruined.

"I wanted to make sure that we were coffee people first and foremost, a high-quality coffee shop," Schulte says. "The rest, there's times when you just got to get out of the way as an owner and let the company or the business become itself. And you kind of got to let go.

"You realize that if you have good people, they start to leave their mark on the company as well. You start to step back and let them take ownership. And once you let the staff take the ownership, you won because then the identity of the company, that family atmosphere, that feeling you get when you come in here, that's them. It's authentic. It's not just a boss telling you what to do. You just get out of the way, you know, and let the business evolve and grow."

Schulte plans to continue to challenge himself and his team to keep growing. As far as the future of Picasso's, it will keep on roasting coffee, opening doors to the community and letting the live music play on. And it will still feel like home, like every customer's own personal community.

Note: This article has been updated to correct the date of live music at Picasso's. We apologize for any confusion. Visit Picasso's website for their live music schedule.