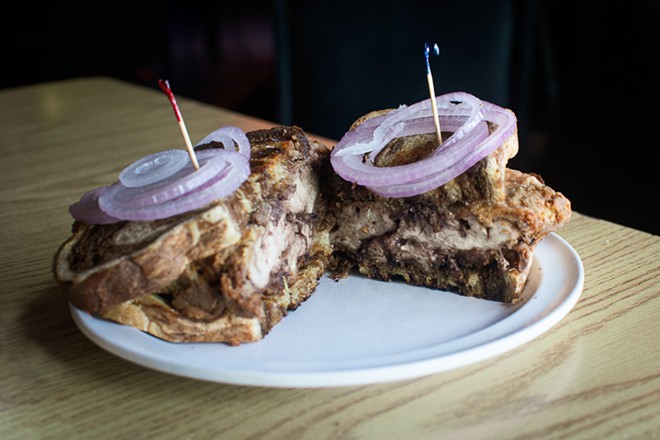 Andy Paulissen
Schottzie's Bar and Grill, and it's deep-fried brain sandwich, has been an institution since the late 1980s.
Inside Schottzie's (11428 Concord Village Avenue, 314-842-1728) you'll find all the typical trappings of a bar and grill. Sports memorabilia plaster the walls, TVs in every corner relay the latest games and customers munch on fries and burgers in between sips of beer.

But Schottzie's in south St. Louis County is more than your typical run-of-the-mill establishment. It's one of few St. Louis eateries where patrons can find brain sandwiches, a once-common St. Louis staple.

Gooey-butter cake, pork steaks and t-ravs are all quintessential St. Louis foods, but the brain sandwich is a lesser-known regional delicacy that is often left out of conversations about classic Gateway City eats.

What does brain taste like? Schottzie's owner, Mike Carlson, gets asked that a lot. He says you'll have to taste it to find out.

"It doesn't have a whole lot of distinct taste to it," Carlson says. "People say it tastes like chicken or whatever, but it's really our breading and our seasoning that gives it the distinct taste. A brain's a brain, you know?" 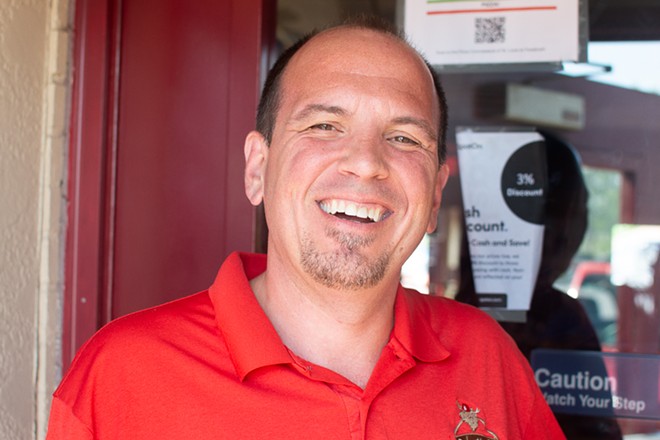 The brain sandwich dates back to the 1800s, when stockyards and slaughterhouses were prevalent in East St. Louis. Brains weren't exactly sellable, so workers took the meat home, often frying the ground organ in lard. The popularity of fried brains has diminished over time, but Schottzie's has successfully sold a fried brain sandwich, made of beef, for decades. Fergie's Bar and Restaurant in Lemay also serves the sandwich, though its version uses veal.

Carlson and his staff serve a limited amount of brain sandwiches a week, and "they go like that," Carlson says with a snap of his fingers.

"We have people driving from hours away," Carlson explains. "A couple weeks ago, we had somebody who said they drove five hours for a brain sandwich."

Carlson has owned Schottzie's since 2018. He took up ownership after working as a night manager for his father and business partner for 15 years. Altogether, the bar and grill has been in Carlson's family since the early 1990s. Its name derives from a previous owner, Mike Schott, and loosely translates to "sweetheart" in German.

Schottzie's building has known many owners since it was built in the 1940s, but it didn't become Schottzie's until the late 1980s. Longtime south countians may remember its previous incarnation as Anton's, an Italian restaurant.

Brain sandwiches have been on Schottzie's menu since the days of former owner Schott but in different forms. 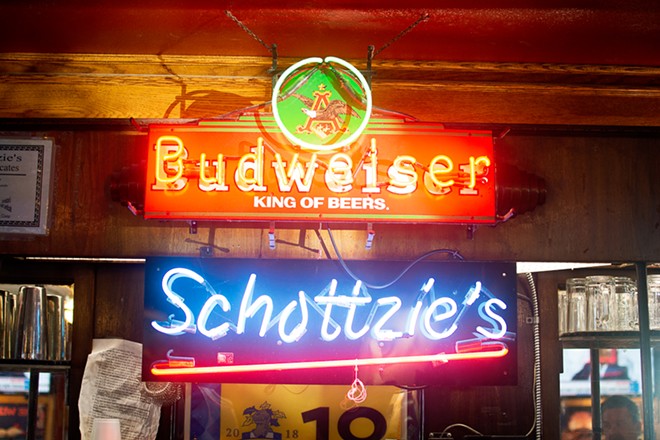 Andy Paulissen
Schottzie's has all the typical trappings of a bar and grill — and much more.

"In 2005, you couldn't find a butcher to sell you a beef brain at all because of mad cow disease," Carlson says. At the time, a few cases of mad cow disease led to a global scare. Schottzie's went without brains on the menu for about a year, until a food distributor found Carlson some pork brains.

Then, during the peak of the pandemic in 2020, Schottzie's couldn't find brains anywhere as butcher shops lost staff and focused less on extraneous cuts of meat. Carlson eventually found Wenneman Meat Company in St. Libory, Illinois, which sold him beef brains. The company remains Schottzie's brain supplier to this day.

Once fresh meat comes from Wenneman's, Schottzie's divides the meat into patties that they cover in breading mixed with herbs and spices. The patties are then frozen and take about 25 minutes to fry once ordered. Schottzie's prepares the sandwiches to order and serves each on rye bread with spicy mustard, pickles and red onions. 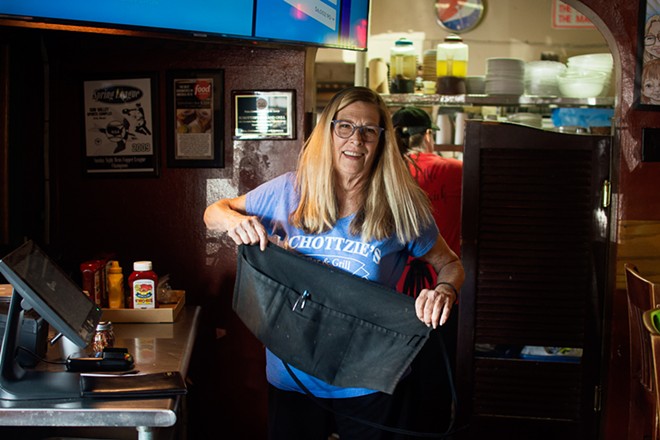 Most everything served at Schottzie's is made in-house from scratch. Its long menu offers a broad range of items, from quesadillas and deep-fried mini tacos to clams and chicken livers. A customer favorite is Schottzie's tavern eggs — hard-boiled eggs wrapped in sausage and Italian bread crumbs that are then deep fried and served on sourdough bread with mustard.

The low-key, 100-seat bar and grill is easy to miss while driving down busy Lindbergh Boulevard and is one of the best-kept secrets of south county, though many locals are well aware of Carlson's cozy establishment. Some have gone there for decades.

"I've seen kids come in and then, all of a sudden, they're having their first drink here," Carlson says. "In the same way, I'll have an older gentleman sitting at the bar and tell me, 'I had my first drink here when I was 18.' You know, way back in the day. We don't do that anymore."

For Sharon Jennings, who has waitressed at Schottzie's since 1997, her regulars are like a family.

"I've waited on people that were coming in here when they were children that are now bringing in their children," she says. "People walk in on any given night and they might know six or seven tables of people here. ... I always refer to them as my Schottzie's family."