St. Louis Standards: The Pastrami at Carl’s Deli Is Legendary

Customers come for the meats and stay for the magic 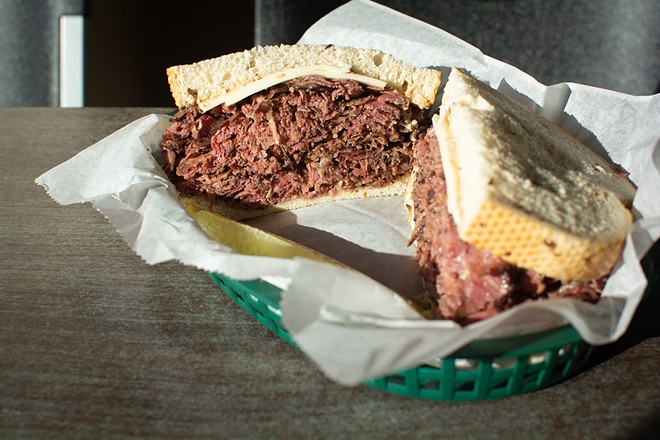 Andy Paulissen
Though Carl's Deli serves other sandwiches, it's the pastrami that's the legend.
Matt Lewis is proud of the deep relationships he's cultivated with his customers at Carl's Deli (6401 Clayton Road, 314-721-2392), first as a teenage employee and now as its owner. Sometimes, though, he has to laugh at how few boundaries there are between him and a few of his guests.

"Some ladies come in, and it's funny because they tell me that I am getting gray," Lewis says. "It's not something you just go up and say to someone, but I guess they feel that they've been coming in long enough that they can say it because they feel like family and are comfortable with me. I tell them right back, 'Yeah, it's because I deal with you.'"

For Lewis, that jovial rapport with his customers is his biggest joy as owner of Carl's Deli, the iconic sandwich counter and delicatessen that has stood at the intersection of Clayton Road and Demun Avenue since 1969. For decades, legions of fans have packed the small storefront, eager for a taste of the restaurant's signature pastrami sandwich, a whopper of a dish that has set the standard for the form since Bill and Jack Carl opened the establishment in 1947. At the time of its founding, the brothers had just returned from military service in World War II and were tasked with bringing to life their parents' dream of opening a Jewish deli. 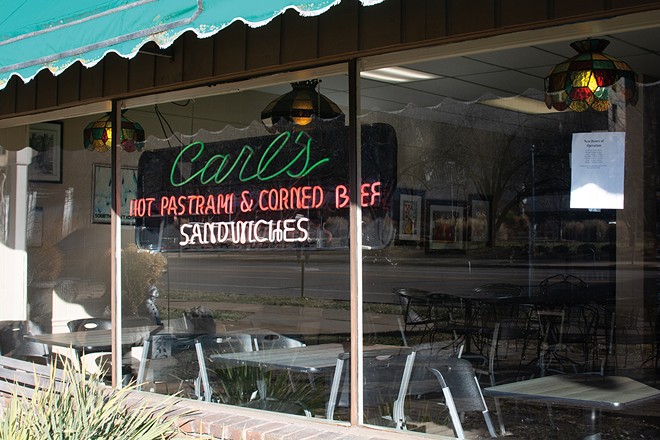 That original iteration was located in the Delmar Loop, where Bill and Jack ran it together until 1969, when the building's owner decided to end their lease because he had other plans for the building. At that point, the brothers decided to go their separate ways; Bill took the Carl's Deli name and found a shop on Clayton Road, while Jack headed downtown to open Jack Carl's 2¢ Plain. Though he wasn't there until the mid-1980s, Lewis recalls the brothers' deli rivalry as a friendly one centered around two very different personalities.

"Jack was like the 'Soup Nazi' from Seinfeld; if you didn't know what you wanted right away, he'd move on to the next person," Lewis recalls. "Bill was the kind and gentle one, and he'd always ask how you were doing. It was funny; they'd actually call each other during business [hours] and tell each other how busy they were. It was a competition, but they were very close and would help each other out."

Lewis learned a lot about the early years hearing stories as he worked alongside Bill, but his personal knowledge of the business dates back to the mid-1980s, when he was a student at Christian Brothers College High School, or CBC, then located just down Clayton Road from Carl's. His older brother had a job at the deli, which gave him an in. However, Lewis took it and ran with it, working in the mornings before school and the afternoons following dismissal. He continued on at the gig after graduation while taking general-education classes at St. Louis Community College-Meramec, and became Bill's right-hand man, all the while trying to figure out what he wanted to do with his life. His father turned up the heat on that decision after he stopped going to Meramec, telling him he had to get serious about choosing a career path. This led to Lewis going on a series of job interviews, until one day Bill threw a wrench in those plans.

"He told me to not accept any job offer until I talked to him," Lewis says. "I went in the next day, and he told me he was looking to retire and wanted me to take over. I hemmed and hawed for a while, because I wasn't sure if I wanted to do it or if I could afford it, but I talked it over with my grandfather, who was an accountant. We went through the books, and it took a couple of years to come up with a deal, but we finally came to one where I didn't have to come up with the money up front; he just walked away, and I stepped in and would send him a check until it was paid off."

Lewis officially took over Carl's Deli on January 1, 2000, and has kept it a family business ever since, employing his dad as a second-in-command for several years, and his younger brother, younger sister and nephews when they were looking for part-time work. He notes that some things have changed over the years — though Carl's still sells traditional Jewish delicacies such as knishes and lox, the restaurant has transitioned into more of a New York-style spot.

One thing that has not changed is the pastrami, the restaurant's signature dish. Lewis, who learned the art of slicing the peppery meat from Bill himself, is not exactly sure of the secret to the magic, but he hears all the time from his regulars that it's just not the same anywhere else. Some of their affection for the dish has to do with the quantity Carl's has come to be known for over the years.

"We are known for piling on the meat," Lewis says. "We probably put too much on, to be honest. We don't weigh it; I just try to eyeball it and probably overdo it sometimes. As soon as we cut back, though, people call us out on it, so it's this cat-and-mouse game."

Andy Paulissen
Carl's sandwiches are known for their sky-high meats.

Lewis knows that people come in for the pastrami, but he understands that the real reason for the restaurant's staying power goes far beyond how much meat he stuffs between two pieces of rye bread, regardless of how heaping a portion it is. He says that the relationships he's formed with his regular customers energizes him and notes that the best part of coming in to work is seeing regulars who began coming in when they were little and now show up at the counter with their own kids. Hearing their stories — about their grandparents' favorite dishes or what their dad would order or their memories of the days when there would be sauerkraut on the tables — makes him realize that there is real meaning to his work. It may be a difficult business, especially over the last few years, but it's one that brings so much joy to those he serves.

"People always come in and tell me that I can never close because we are a St. Louis landmark," Lewis says. "They tell me we are up there with places like Ted Drewes. It always makes me feel good, and I don't know how to respond to it. And I hear it from such a diverse group of people. We get college kids, construction workers and people who worked on Highway 40 when they shut that down forever. It's always fun when we get people who tell us they stop in every time they go to the doctors' offices right across the street. They assure me that they go there first and then come in, which is great, because I don't want their doctors coming in and yelling at me about serving their patients that much pastrami."