St. Louis Standards: The Pat Connolly Tavern Is a Bar for the Ages 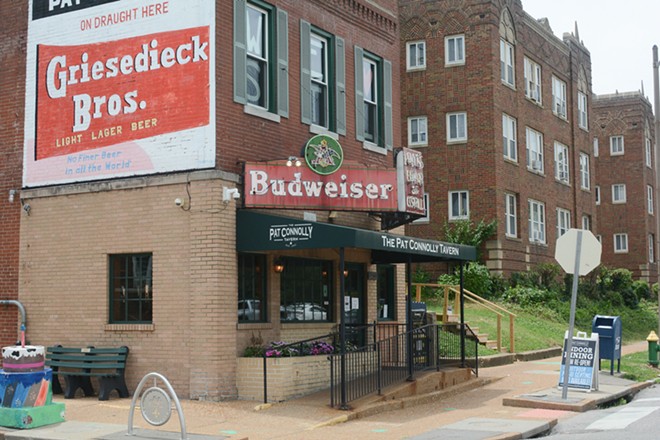 ANDY PAULISSEN
The Pat Connolly Tavern has been a part of the Dogtown community for nearly eight decades.

When Joe Jovanovich took over Pat’s Bar & Grill in 2015, he did so not because of some longstanding desire to get into the restaurant business. Instead, he upended his life and took on the place out of a responsibility to his family, his neighborhood and his city.

“At the time, I was involved in nonprofit work, but the place had fallen on hard times, and it came down to a question of whether or not it was going to keep going,” Jovanovich says of the bar and grill. “It was definitely a leap of faith, but I felt that taking it over was a way to save and preserve it. It felt like an important piece of my family’s history, but also of the neighborhood’s and city’s history, and I felt that I had to keep that going as a small little slice of St. Louis culture.”

Now operating as the Pat Connolly Tavern (6400 Oakland Avenue, 314-647-7287), the bar and grill on the corner of Oakland and Tamm avenues has been a part of St. Louis culture for 79 years. Though the place was likely a bar before his grandfather, Pat Connolly, bought the building, Jovanovich traces his family’s involvement back to a bill of sale dated 1942. He’s not sure why his granddad decided to get into the bar business; a native of a small village outside of Galway, Ireland, Connolly had no background in pubs. Instead, he worked in the fields around his family’s home until he immigrated to the United States in 1927. Family connections and an established Irish community led him to St. Louis, where he got a job in one of the city’s many downtown shoe factories until he purchased the Dogtown bar. Why he did, as well as the details of his life between 1927 and 1942, remains a mystery.

The building’s history is a little clearer. Built in 1918 to be a general store, it soon morphed into a soda fountain and apothecary and stayed as such through Prohibition. Jovanovich isn’t sure when the place changed into a bar, but he found a photo from the 1930s that shows a sign on the building reading “Tamm Oak Tavern.” He doesn’t know the details of that iteration, but he is confident it was a bar when his grandfather bought it, since the bill of sale contained details about bar equipment.

For the first several years, Connolly kept the place as it was — from photos, Jovanovich says the scene looked like a soda fountain that someone turned into a bar. However, in the 1950s, Connolly added a kitchen to the back of the building, renovated the existing structure and converted the place into a bar and grill, ushering in a new era that defines the Pat Connolly Tavern to this day.

“At the time, this was one of the first bars and full-service restaurants in the neighborhood,” Jovanovich says. “In the post-war era, it became the trend to have more of a bar and grill in one place; before that, bars and restaurants were mostly separate. When he made the change, he came up with the core staples of the menu — the fried chicken, the fried fish, the burgers all get traced back to then. We still have some of the old menus from then, and not much has changed.”

Connolly ran the bar and grill until 1962 when he sold the business, but not the building, to a longtime employee. That proprietor changed the name to McDermott’s, which became well known as the place to go before and after Blues games. In 1980, the owner sold the place back to Jovanovich’s mother and father, who changed the name back to Pat’s and ran it throughout Jovanovich’s childhood. He loved growing up in the bar and relished the mini-celebrity status it gave him in the neighborhood; his basketball team would have its post-game meals at Pat’s, and everyone in the area came in to see his dad — even some of the Blues players.

Jovanovich and his mother’s life got upended when he was eleven years old. His dad died suddenly from an aneurysm. Not long after, the Blues left the Arena for their new home downtown and took a chunk of the bar’s game-day business with them. Though his mother kept up the place for a while, she eventually decided to sell the bar and grill to a longtime employee while, like her father, retaining ownership of the building. It was a good arrangement, but eventually, Pat’s fell on hard times and was in danger of closing. Instead of renewing the owners’ lease, Jovanovich took over the place and renamed it the Pat Connolly Tavern, reclaiming his family’s legacy and ensuring that the tavern would be around for generations to come.

Jovanovich admits that tavern proprietorship has not been easy, and he feels a constant pressure to strike just the right balance between preserving the restaurant’s history while being mindful of present-day preferences. It’s a juggling act, and he admits that he has not always gotten it right.

“Now, it’s all about finding the balance between keeping that legacy going, but at the same time trying to stay relevant and attract new audiences,” Jovanovich says. “We haven’t quite found the magic formula, but we are still working on that. You have to adapt and pick where you can evolve, but that can be challenging to do without upsetting somebody. It’s definitely been interesting to see how to balance the past with the future.” 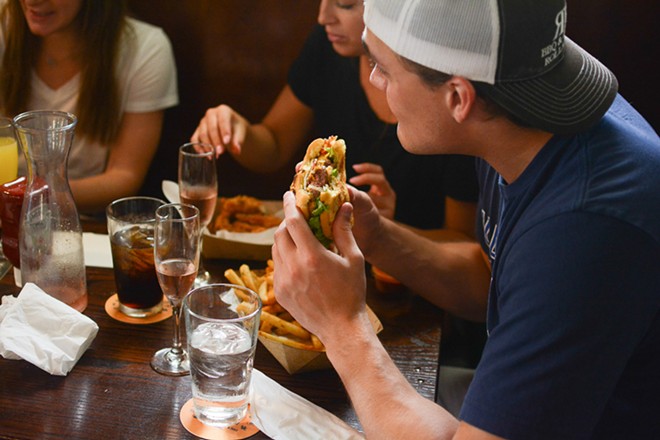 ANDY PAULISSEN
The Pat Connolly Tavern is known for its burgers and fried chicken, but its the community that makes it special.

The past year has made that balance even more difficult. If Jovanovich was inclined to hang onto certain aspects of the tavern that may have been nostalgic but not profitable, the COVID-19 pandemic has forced him to make tough decisions in order to survive as a business.

“It’s tough because there’s an emotion there,” Jovanovich says. “As a restaurant, we aren’t doing life-saving work, but people form these compelling attachments to bars and restaurants. If you go to the doctor and they say they don’t do a procedure anymore, you say, ‘Wait, but I need that to survive.’ We don’t have chicken gizzards anymore, and people are asking how they are going to survive because they’ve been coming in for decades to get them. It tugs at the heart a little, but we have to look at what keeps the door open because now, every penny counts. I know that’s not a fun, historical message, but it’s honest.”

Still, Jovanovich remains committed to keeping the Pat Connolly Tavern’s legacy going for decades to come. He admits that there are days when things get especially tough, and he wonders why he keeps going, but then he thinks about the customers and how many memories are attached to the place. It fills him with both a sense of pride in what his family has created and a sense of obligation to honor those memories — and guarantee that there is a space for people to create new ones for the next 79 years.

“A restaurant is a commercial thing, and obviously you keep it going because you want to make money to support your family,” Jovanovich says. “But also, it’s like you own a little bit of a museum and there’s that sense of obligation to keep something going because it’s part of a larger story. That’s why we jumped in in the first place, and it’s why we keep it going. Sometimes, you get to the point where you think the world doesn’t need any more fried chicken, but then you realize that it’s not really about the fried chicken or a food item or the fact that the bar looks cool. It’s that all these little things add up to this community, and people have a connection to it.”