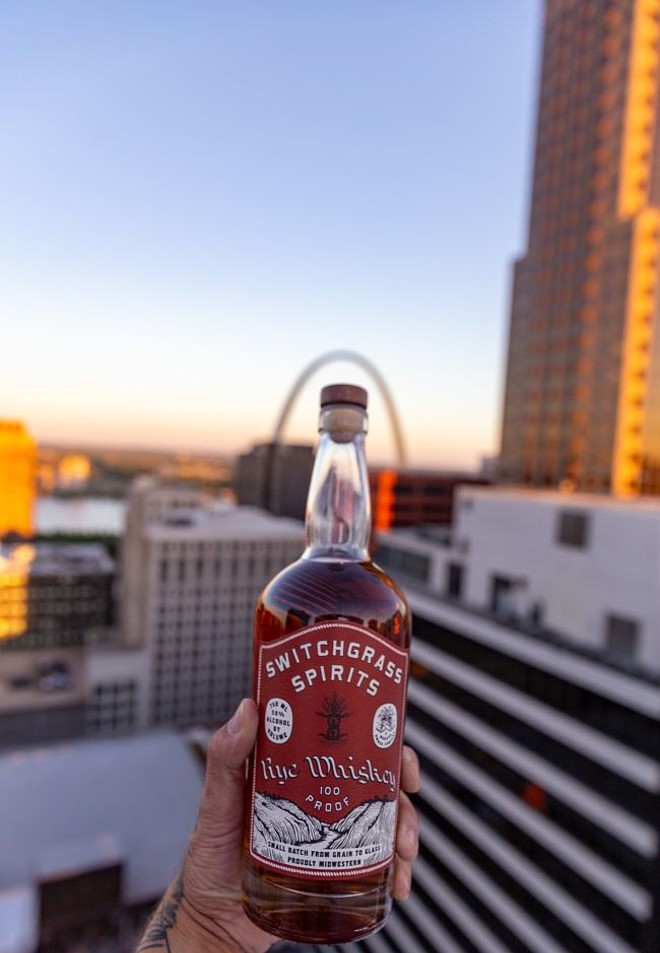 VIA SWITCHGRASS SPIRITS
It's the local distillery's third offering since opening up shop.

The last time we checked in with Switchgrass Spirits, not quite two months ago, the upstart local distillery was releasing a young bourbon called First Batch. It was created in a smaller amount, as a way to continue introducing folks to their name, but also because the product was tasting ready for market. No need to rush it, they figured originally; nor was there a need to hold back upon tasting that year-old bourbon. And so, in June, it became their second product.

There’s a bit of that same spirit in the new rye whiskey released today by Switchgrass, its third offering. One of the Wellston-based distillery’s principals, Nick Colombo, says that Switchgrass Rye was created with a four-year release point in mind, but that testing occurs along the way — just in case there’s something special in those barrels. If there’s a collective feeling that the work’s ready for market, that’s where it goes.

Not content to just rely on their own palates, Switchgrass called on a group of folks that Colombo laughingly calls “whiskey nerds, the type who collect bottles,” in order to get a handle on if their new rye was ready. Local bar scene maven Ted Kilgore sat down for an hourlong tasting and conversation. The general take was: Go for it.

“We made it for cocktails,” says Colombo. “It’s got a high rye content, more than 75 percent, with some barley and wheat and no corn. So it’s a wheated, sweet mash rye, pretty smooth, with a crazy amount of different flavors.

“When I think of ryes,” he continues, “I think of boldness. I think of heat, a high proof, peppery, more flavor. So ryes aren’t for everyone, for those reasons. When they want a rye, they want ‘more.’ When I think of bourbon, I think of something that’s smooth, that you can sip. In designing our two barrels, one for bourbon, one for rye, we wanted the rye barrel to be bold and for the bourbon to be smooth.”

The price point for these early introductions is kinder for the customer, with Switchgrass products retailing in area stores for just shy of $30. In addition to various specialty stores that have already carried Switchgrass, its products are now for sale at four key Schnucks locations, a major retailing coup for the young operation. Colombo notes that bigger stores will want products that are available all the time, and Switchgrass Rye will, in fact, be one of the flagship offerings with regular availability.

The businesses that gave their first few products a run, though, were bars and restaurants. And many of those are not operating at anything resembling pre-COVID-19 levels, if they’re even open at all. Because quite a few of them were sympathetic to picking up local products, Colombo says that Switchgrass has been getting creative in sales of late. With Switchgrass Rye, for example, the crew created the Rye 100 Club, for which they’ll quite literally arrive at a buyer’s door with a packaged Rye, as well as a glass and a personal thanks.

Colombo says that running a distillery giving birth to product lines during a pandemic has been “definitely interesting,” but that this 100 Club notion “has been pretty fun. We hope to do more of these.”

The flagship bourbon will arrive in October, with apple brandy and clear apple brandy also in various stages of the distilling process.

For those curious for a taste and who missed out on the 100 Club, Switchgrass Rye is available today. For more information, visit the distillery's website.