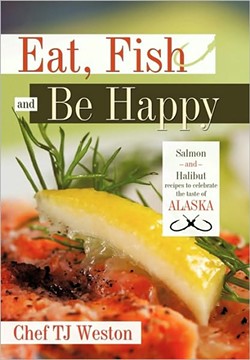 TJ Weston, a St. Louis native and graduate of the Culinary Institute of America in Hyde Park, New York, has published his first cookbook, Eat, Fish & Be Happy: Salmon and Halibut Recipes to Celebrate the Taste of Alaska. The book draws from the 28-year-old Weston's time as the chef at a fishing lodge on the Alaskan island of Sitka.

How does a kid from St. Louis end up in tiny Sitka, population a shade under 9,000, best known -- if at all -- as the setting for Michael Chabon's novel The Yiddish Policemen's Union?

"I really had no desire to ever go to Alaska," Weston says. He was working at Los Angeles at the time that a friend of his landed the gig at the lodge. When his friend was unable to take the job, Weston stepped in.

"It's really raw," Weston says of Sitka, a place where you encounter bald eagles and grizzly bears.

"It was just amazing to go catch a salmon or halibut. I was hooked."

As its title suggests, the cookbook features numerous recipes for both halibut and salmon. Weston thinks the best preparation of halibut is fried in a light panko bread-crumb crust or even a beer batter, while salmon is best on the grill. There are also numerous recipes for meat, salads, appetizers, soups and salads.

Weston doesn't find it ironic that a St. Louis native would end up producing a seafood cookbook, considering the produce now available here. "When I was six, Red Lobster was good seafood in St. Louis. When I went to culinary school, St. Louis was coming around with a good food scene."

In St. Louis, Weston logged time at Bevo Mill and Cardwell's at the Plaza. In fact, he gives chef Bill Cardwell ample credit for where he is today: "Working for guys like Bill Cardwell set the bar pretty high."

Weston is currently based in Michigan's Upper Peninsula, where he runs Weston Food Consulting, the website of which can also be reached through www.loveyourchef.com.