Stellar Work: Five-Star Burgers lives up to its name 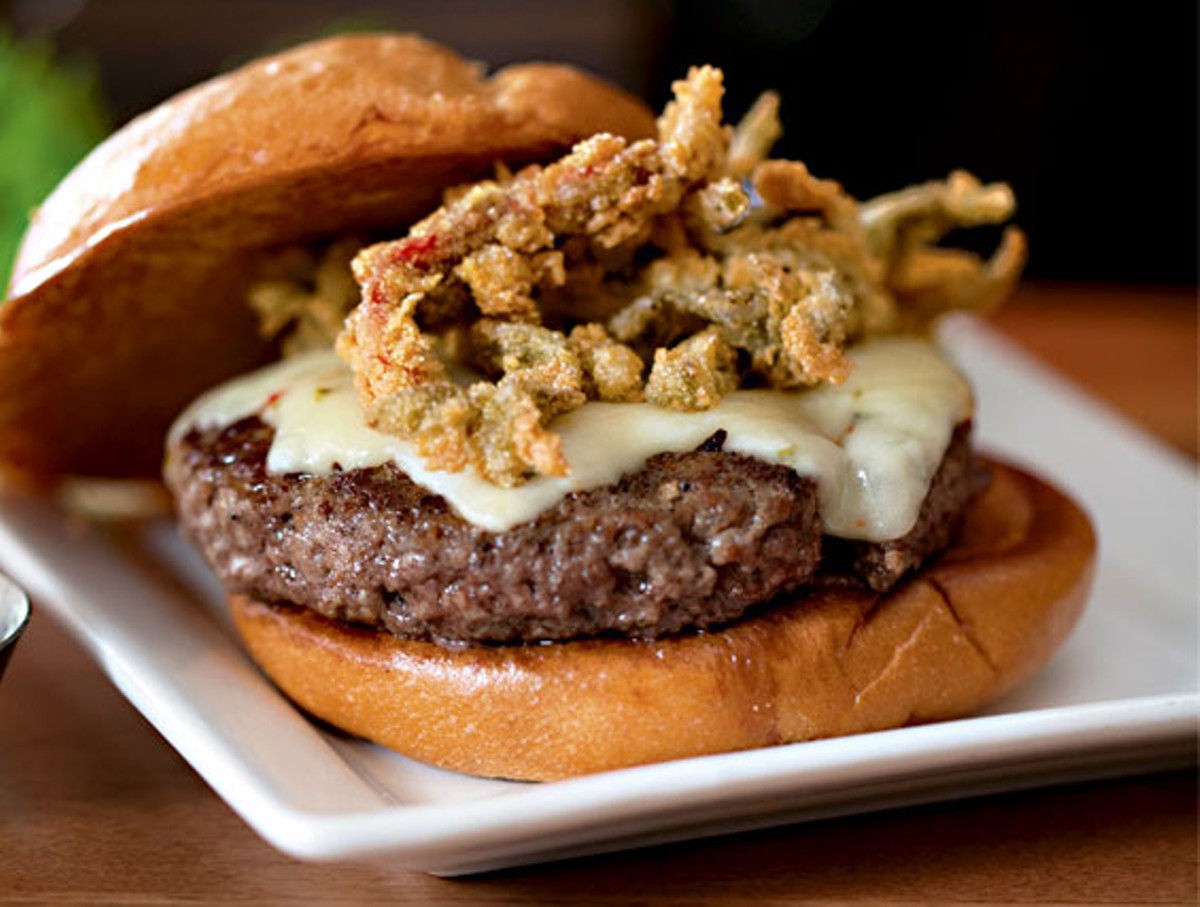 Stellar Work: Five-Star Burgers lives up to its name.

To be blunt: If, after this year and the one before, you haven't at least considered a new entry or three to your personal accounting of St. Louis' five or ten best burgers, then a) you are stubborn to the point that I question your capacity to experience joy; or b) you need to get out more. From burger-centric spots such as Baileys' Range to the burgers at such standout restaurants as Blood & Sand and Home Wine Kitchen, the past two years have been very, very good for burger lovers.

The latest competition for your burger buck is Five Star Burgers, which opened in downtown Clayton this October. The name is a bold claim. Then again this burger joint does boast a more impressive pedigree than most. Owner Steve Gontram will be familiar to St. Louis diners from his time as the owner and chef of Harvest in Richmond Heights. (He sold that establishment to its executive chef, Nicholas Miller, in 2010.) His new venture is much more casual and far less expensive, yet from such essential matters as the beef used for the burgers to details as trivial — or seemingly so — as the presentation of an order of fries, Five Star Burgers displays the same passion for quality ingredients and meticulous preparations that won Harvest so much acclaim.

The restaurant certainly doesn't look like a burger joint. The design evokes a modern bistro — sleek, a little cold, even. The single dining room is an L-shape with the bar and high-top tables on one side, a long banquette and freestanding tables on the other. The décor is spare. Only the five large metal stars affixed to one wall stand out.

Five Star Burgers is actually a family business, though not in the typical way. Gontram's father opened the original location in New Mexico in 2008. There are now three locations in that state and another two in Colorado. The St. Louis location has a similar, but not identical, menu to the original. Given the restaurant's New Mexico origins, it makes sense that the one dish Gontram has copied wholesale from his father is the green chile cheeseburger. It just so happens to be the best thing here.

First, though, the patty itself. As the menu describes at length, Five Star Burgers sources Black Angus beef from Creekstone Farms in Kansas. (Though the name might suggest a small, family farm, it's actually a sophisticated operation whose parent company is Sun Capital Partners, Inc., a private-investment firm.) The meat is hormone-free, pasture-raised, finished on corn and processed in a facility designed by animal-welfare guru Temple Grandin.

The kitchen grinds the meat fresh daily, forms it into simply seasoned, perfectly sized patties — a solid weight, not overwhelming — and cooks each to order. My preferred temperature is medium-rare, and the kitchen nailed it every time, a vivid, juicy red. The patty's flavor has the bright notes you associate with grass-fed meat, but these work as an accent to the undeniable pleasures of rich grain-fed, well-marbled meat. Every burger is served on a toasted brioche bun substantial enough to hold the sandwich together, but airy enough not to get in the way.

The "5 Star Burger" is the basic, unadorned burger, which you can top as you want with lettuce, tomato, onion, pickle and condiments. (You can add cheese, bacon or other toppings, but there is a charge for each.) "Dad's Green Chile Cheeseburger" features Hatch chiles from New Mexico in three ways: a layer of raw chiles beneath the burger; a layer of battered and deep-fried chiles atop the patty and its two slices of pepperjack cheese and, on the side, a green-chile mayonnaise. The chiles add heat, of course, and the fried chiles provide textural contrast while the mayo gives another layer of lusciousness to the meat and melted cheese. It's a great burger.

Other burgers include the "Magic Mushroom," with sautéed mushrooms, caramelized onions and Swiss cheese. The mushroom-Swiss burger is a cliché, but the Five Star version elevates itself thanks to mushrooms that actually taste like mushrooms, rather than the canned variety, with a hint of sweetness from the onions. The "Gateway Burger" has cheddar cheese, bacon, a sweetish barbecue sauce and onion rings in a thick, crisp jacket of batter that doesn't turn soggy even as you work your way through the meal.

A selection of "Specialty Burgers and Sandwiches" features burgers made from ground turkey, bison and lamb. I tried the lamb. The patty was thick and juicy, and the kitchen smartly pairs the meat's strong natural flavor with a cool tzatziki sauce and, for crunch and pucker, battered, fried pickle slices. There are two vegetarian options, one with a portobello mushroom cap in place of the patty, the other with a patty of lentils, whole grains and finely diced vegetables. The latter doesn't try to ape a true burger; rather, it has a texture and gentle, warming spice reminiscent of falafel.

An order of french fries arrives at your table in a miniature fry basket. This is cute, but it also serves a purpose. It forces you to pay attention to the fries, which are outstanding. Freshly cut from russet potatoes, they have a crisp exterior and pillowy interior. Sweet-potato fries are served in the same basket. If you have yet to grow tired of the seemingly omnipresent sweet-potato fry, you will enjoy these — though the maple-cream sauce served alongside them strikes me as an unnecessary extra hit of sweetness. Whichever fry you choose, you have to order them à la carte. A small order is plenty for one, a large for two. (The kitchen also serves a large order of regular and sweet-potato fries combined.)

Other sides — or, if you like, appetizers — include the aforementioned onion rings and, for a true indulgence, battered and deep-fried cheese curds. The curds go especially well with beer, and Five Star Burgers offers several local craft beers on draft and a larger list of bottled and canned craft beers. (As part of the happy-hour menu, from 4 to 6 p.m. daily, you can have an order of the curds for $2 and a draft beer for half-price. Say hello when you see me.) In true burger-joint fashion, dessert is ice cream from Serendipity by the scoop or in a shake or float.

Five Star Burgers displays the same passion for quality ingredients and meticulous preparations that won Harvest so much acclaim.